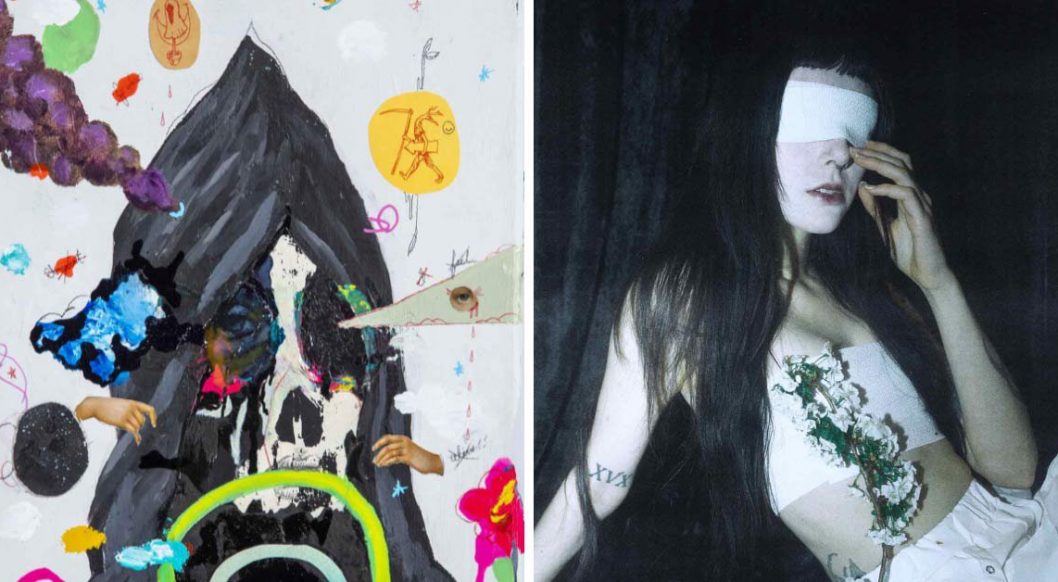 10 Spook-tacular Artists to Get You Into the Halloween Spirit

Boo! It’s officially spooky season, y’all. Whether you’re gearing up for Disney Channel’s Halloweentown or looking for an Exorcist–level scare, we’ve got you covered. We’re completely batty over Halloween at NOT REAL ART, so this year we’ve concocted a special treat to stash in your pumpkin pails: a creepy collection of 10 artists who explore the subconscious fears that keep us up at night.

Scroll through for a selection of photographers, painters, and illustrators who unveil the things that go bump in the night. Happy haunting!

“The art that comes through me is under the surface,” Erin writes in their pithy artist statement. “I'm drawn to mystery. I'm drawn to desire.” A seasoned filmmaker, Erin—who also works under the pseudonym XP—conducts their photo shoots from the director’s chair, manipulating spare scenes with the flick of a magician’s wrist. Their oil-slick narratives play out in empty, theatrical spaces haunted by cast shadows, bleached funeral pyres, and plenty of horror-movie hair. “I love walking into the night,” Naifeh explains. “Into the unknown. Into the things that hide.”

Often, Erin is veiled in dark, sopping strands of their own hair. Or they simply turn their back to the camera, teasing us with the half-whispered fragments of a fictional story. Making room for light and levity, Erin’s work is slyly compassionate, a safe place for dark stories to slowly unravel. “I love putting my arms around those things [that hide]” they say, “and carrying them into the light.”

Get spooked by Erin: Photographer Erin Naifeh Walks Into the Dark Night of the Soul [Interview]

One glimpse at Tyler Scully’s work sends an ice-cold chill down the spine. Based in LA, Tyler paints nightmarish portraits that haunt like the climax of a David Lynch flick. Stripped of flesh and surrounded by wispy, colorful brushstrokes, his figures flash toothy, gumless grins below hollow nose bones and sunken ocular sockets. Trapped in shallow space, Tyler’s phantoms linger in purgatory, waiting to be whisked toward heaven or hell.

Drawing from Surrealism, traditional portraiture, and his Irish and Hawaiian background, Tyler creates expressionist work that lays bare the raw brutality of being human. Violently distorted, his work reveals humanity’s common denominator: flesh and bone. "Portraiture has traditionally been symbolic of wealth and status, but my work focuses on deconstructing portraiture to universal people that we can all connect with,” he explains. “The portraits transcend race, sex, gender, identity […] all these borders and identifiers we place to label each other become irrelevant when the portrait connects on a universal human level.”

Get spooked by Tyler: Tyler Scully on the Art of Dying

Mike’s drawings from his recent body of work And Yet… are partially based on photographs taken in the 1970s by Eduard Albert “Billy” Meier, a Swiss man who believed he was documenting actual UFO encounters. Mike’s style, a meticulous “array of inky hatchings,” imbues the work with a pixelated effect, one that mimics the grainy aesthetic of paranormal photography. Here, Mike plays both racketeer and believer, equal parts Agent Fox Mulder and snake oil salesman. His enigmatic drawings are impossible to fully decipher, yet they hint at a deep-seated need for meaning and control within a chaotic reality.

Get spooked by Mike: Mike Nudelman Elevates the Mundane to Sublime, Supernatural Heights

The mind can be a terrible thing to taste. Mexican photographer Brenda Maria Fernandez’s nightmarish body of work, This is the Feeling You Thought You Had Repressed, steps into the strange recesses of a drug-addled psyche with powerful if frightening results. The work is “a delicate but dark and unapologetic look at my past…under the influence of a really powerful ADHD medication,” Fernandez writes in her artist statement.

Working with pitch black shadows and saturated jewel tones, Brenda creates an isolated environment where vulnerable bodies stumble through dimly lit hellscapes. One imagines there’s little chance of escape. Those unlucky enough to find themselves in the artist’s self-contained world become trapped, like insects desperately seeking a way out from under the glass.

Deceptively rose-tinted and rebellious, new work from multimedia artist D*Face (aka Dean Stockton) reveals the hairline fractures appearing in our quick-fix, instant-oatmeal society. “After living through an unprecedented, historical moment in time that saw us globally locked down as a result of the pandemic, I think we’ve witnessed our fair share of ‘cracks’ appearing across society and culture alike,” he says.

Often describing his work as “aPOPcalyptic,” D*Face picks up where American Pop art left off, twisting the original vision—optimistic, generous, and naive—into biting social criticism. Inspired by advertisements, classic film, and comic books, the London-based artist uses a pastiche of familiar images from our cultural lexicon to create his tongue-in-cheek work. Picture American Golden Age classic Casablanca recast with a tattooed mermaid and sinewy skeleton couple. “I wanted to play on this expectation of predictability in the show by twisting some of Hollywood’s most iconic creations,” he notes. “Defacing and reimagining the images we think we know and trying to break that cycle of comfortable, knowable nostalgia.”

Get spooked by D*Face: Pop Art Meets the Apocalypse in D*Face’s Hollywood-Inspired Work

The three stages of life, according to enigmatic artist Tommy Devoid, are as follows: birth; “what the fuck is this?”; and finally, death. Those in the middle stage—presumably everyone reading this sentence—can probably relate.

A self-taught digital artist specializing in sardonic prints, Devoid offers a welcome antidote to the poison positivity of “live, laugh, love” sloganeering. “I enjoy making people laugh and creating jokes that can be dark, gritty, and even ghastly at times,” he says. Dunked in a vat of acid, Devoid’s tart-tongued works melt like sugar before burning a hole on the roof of your mouth.

Like your favorite horror movie, Andrew Au’s work pulls double duty, serving up scares that also illuminate deep-seated cultural anxieties. Working with a variety of digital and analog printmaking techniques, the Cincinnati-based artist illustrates a dark, wild ride through the terrifying corridors of his own mind.

Horror films have long acted as a vehicle of expression for underlying personal and social fears: paranoia bred out of religious frenzy (The Witch), panic over women’s bodily autonomy (Rosemary’s Baby), and the nonsensical brutality of war (Night of the Living Dead). Andrew picks up where surrealist filmmakers David Lynch and David Cronenberg leave off, creating an insular world for his fearsome creatures to frolic. “Mostly driven by my fears and anxieties, these spaces are a way to put those fears into a safer space of reflection and expression,” he says of his work.

Get spooked by Andrew: Andrew Au Serves Up a Double Dose of Scares and Social Commentary [Interview]

Originally an art class model, Morrigan soon grew tired of life in front of the camera. Their almost entirely self-taught photographic works look at the nature of inner reality through the lens of their own mental health. “It's been quite cathartic for me to bring my inner world to life,” she notes in her artist statement. With a background in experimental video, Morrigan credits their photographic success to past experiences in the avant-garde. Their figures, posed in front of velvet curtains and smeared in blue-black light, live in an insular world, powered by dark magic and cyberpunk style.

P-Jay Fidler’s mixed media works are filled with age-old symbols that tap into the collective unconscious. His scattered compositions reveal a Pagan reverence for the impermanence of life within a nonlinear structure.

While he mines inspiration from familiar death symbols—grinning skulls, fading flowers, shadowy figures—the visual metaphors are fraught with all the complications of individual experience. In Fidler’s works, allegorical iconography becomes a vehicle for discussing the transformative qualities of both life and death. The one transformation we all inevitably share—death—is also framed as the most important.

Get spooked by P-Jay: P-Jay Fidler Mines the Collective Unconscious for Death-Inspired Iconography

Sweating over a sexy vampire? Chances are your fanged crush could be either male or female. But If meat-flavored drool and excessive body hair are more your thing, you’re probably lusting after a bonafide wolfman. Emphasis on man.

“The horror trope of the werewolf in movies and literature has been overwhelmingly masculine,” says multi-disciplinary artist Julia Oldham, whose photographic series She-Wolves examines the genre’s gender imbalance. While the Oregon and NYC-based artist notes the recent rise of female werewolves in pop culture—think Katharine Isabelle’s death-obsessed high schooler in Ginger Snaps or Angela Carter’s beautiful and bawdy stories from The Bloody Chamber—her work pushes the idea to extremes, refusing to objectify its subject matter in exchange for audience hoots and howls.

Get spooked by Julia: Julia Oldham’s ‘She-Wolves’ Get Their Moment in the Moonlight