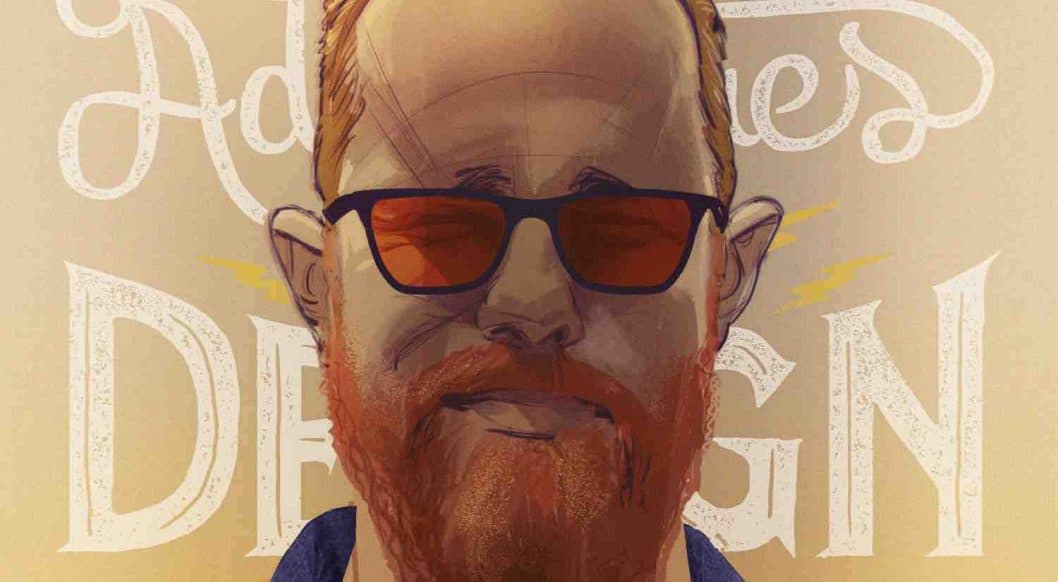 “If I've learned one major lesson since the middle of March when the ‘pause-demic’ started, is that you cannot undervalue what it means to have a community.”

The ‘About’ section of Adventures in Design founder Mark Brickey’s LinkedIn profile reads: “Growing up in a successful band was my high school. Illustrating, graphic designing, and printmaking for the music industry was my college. Podcasting, public speaking, and creating online content is my career.”

And, that’s a wrap! Not even close.

Adventures In Design’s Mark Brickey recently completed episode 1,234 of his popular podcast. On his website, Adventures in Design is summarized as, “A daily talk show for creatives just like you, exploring how others design happiness into their professional lives.”

But like the majority of creatives, the elusive ‘happiness brand’ took some time to formulate. When asked to give us a verbal snapshot of his childhood, Brickey shares, “So, childhood was pretty unhappy. I grew up a fish out of water, on the border of Indiana and Kentucky. And then I found this magical thing in 1984, called MTV. It was a portal to a world that I wanted to be a part of because I immediately realized the world that I was in, was not one that was meant for me. Through the lens of MTV from ‘84 to like ’89, I became a student of music and fashion and this idea of New York City and Los Angeles and places that were much bigger than Louisville, Kentucky…I had a routine of MTV Raps on Saturday afternoon, and then Saturday night, watching Headbangers Ball, and on the weekend, watching 120 Minutes.”

“What I didn't realize was, by studying hip hop, heavy metal, and alternative music, I was looking into a portal of the future, and what my life would become, and the people that I would surround myself with.”

Brickey says he also learned to spot trends and how “authentic voices were expressing themselves,” which at the time, was in direct contrast to his life. “The reality of my life was I was around a bunch of rednecks and jocks and people that didn't like me for being alternative or punk rock or hardcore skateboarding, or whatever you want to call it.”

By the end of Brickey’s junior year of high school, his dad offered an ultimatum, ‘If you want to be a weirdo and you want to do all these things, then go do what you want to do.’ Brickey heeded that advice and was living on his own by his senior year of high school. Using his graphic design skills to forge a local gas and electric bill provided all the documentation he needed to get into a new high school he wasn’t assigned to. “I went to the weird high school where all the weird kids were. Essentially, I was in a John Hughes film freshman year to junior year. I was the outsider. I was The Breakfast Club. I was 16 Candles. Then, just by picking the right location, I transformed into the most popular kid in high school. It was a great moment of validation and self-confidence. It wasn't necessarily me that was wrong. It was the environment I was in.”

“If I had to summarize my childhood, I was a product of bad geography.”

Brickey also formed the band “The Enkindels” in high school. When asked to verify the pronunciation and meaning of the name, Brickey lets out a hearty laugh and explains, “Enkindle is a rare word that we found in the dictionary and we thought ‘Oh, it’s used in Shakespeare. We'll use it!’ It means ‘a fire within or a new start.’ We liked that! Then as time went on, we decided to pluralize it, which literally made no sense – which made it perfect.”

“Nobody likes an old rock n’ roller that stays at the party too long.”

Brickey started the band when he was 15 and resolved that if he wasn’t making a substantial living at it, he would quit when he was 25 because “Nobody likes an old rock and roller that stays at the party too long. Then I realized, foolishly, that at 25 years old, a music career is just beginning. But yeah, I did that for 10-13 years and it was an informative and amazing chapter of my life. I refer to that as sort of my college. Everything I learned about business came from riding around in a tour van and solving mysteries. Everything I learned about creativity came from there. I mean, who's not different at 15 than say, 26 or 27, but it was a great experience during that chapter of my life.”

Brickey’s life chapters are unveiled daily through his fourteen AID Network Shows and Vlog that range from his signature AID interviews of the design greats to Shop Talk for freelancers and creatives, to Disneyland for Designers, “A look into the magic of Disneyland, from the designer’s point of view.”

“Disneyland is one of the greatest living, breathing art installations that was ever created.”

When teased/asked what the love affair with Disneyland is all about, Brickey doesn’t mince words. He will ask you where you are from and he will prepare his answer with laser focus. For Brickey, Disneyland is serious business. He’s earned this expert assessment; he’s been to the amusement park more than 500 times.

“So what I suggest to people that are from California, is for a year you should go live in America. Try it sometime! It's completely different than living in California. Where I come from, Disney is a privilege. It's a once-in-a-lifetime vacation. It’s every kid's fantasy. The mom and dad are gonna be like, “We're going to Disney World!” So it's such rarefied air and you know, growing up in a white trash existence, it's like upper echelon and elegance to go into a Disney Resort. So when I moved out to California and I found that there was a Disneyland 13 miles from my home, it was this sort of ‘Wow, you're not supposed to just be able to go to this thing. It's not supposed to be this accessible.’

“Then, as an adult with a trained eye, I started to realize that it's one of the greatest living breathing art installations that was ever created. Yeah, there is a lot of commerce happening and I have it in me to celebrate that. I love making money. I love seeing other people making money. I love seeing how people make money. To me, there's no evil in making money because it's called ‘Highest Score’ and a high score is what makes the game of life fun. But at the other end of it, they are rewarded with this money because they do such a great magic trick of making the outside world dissipate.

“Maybe it's sort of an Arrested Development type of thing where, you know, my childhood wasn't exactly the happiest and going there somehow touches base with that, but I have to say that I find a lot of optimism through it. I immediately learned that the more that I would study Disneyland, the more that I would learn about its history and it's and the way that it's put together and all the great creative minds that constructed it. It's one of those rare things that you get to define as a consumer or as an optimist or as an artist. The more I love Disneyland, the more that it loves me back.” That said, Brickey confesses with a laugh that one of his famous quotes is “Kids ruin Disneyland.”

On the art of conversation and what he’s learned after 1,234 episodes, Brickey shares, “I think the number one thing that I've noticed after having this many conversations with high functioning creatives of all walks of life is that we are all way more similar than we are different. The creative struggle is parallel. After probably 500 or 600 of these, I started to dial into what that process feels like, what everybody's insecurities are, what the big gamble is, and what the big risk is.”

“I think when you get into somebody's critical voice, and you start hearing insecurities and what they're thinking, it immediately humanizes them.”

Which begs the question – does he have days when he’s interviewing someone and questions his own worthiness? “Oh, yeah. It's called every day that ends with ‘Y,’” quips Brickey. “I've come to realize that the journey never feels complete and that we, as artists, or creatives, regardless of what we’re making, we always feel like tomorrow will be our best project.”

On Coronavirus and the impact it’s had on him, Brickey reflects, “I don't remember being this depressed in a really, really long time. I don't remember having this much anxiety in a really long time. I have a little tradition where I get up every morning, and I go into my photos on my phone, and I type in that day's date. It shows me every photo that I took on that date for the last eight years. I do that to remind myself that I was somebody that had a very productive life. I had a very fun-filled life. I was always busy and always complaining about how busy I was. I do that every day as a remembrance of who I was before this happened, and that I've got to fight hard to get back to being that person.

“When it first happened, the number one responsibility that I felt is my community is going to need me. I have a large portion of my audience that pays for my podcast and we've created a hell of a bond over the 1,200 episodes that I've been able to create with their support. So the first thing I did was say, ‘Okay, the podcast is now seven days a week.’ I knew people were going to need that companionship…If I've learned one major lesson since the middle of March when the ‘pause-demic’ started, is that you cannot undervalue what it means to have a community, to be a part of a community, and to build a community.”

A predominant part of that community includes his wife, Beth, who also heads up her own podcast on AID, ‘Between Meals.’ “I'm blessed that I have a tremendous relationship with my wife,” says Brickey, who describes Beth as his best friend. He then jokes that lately they’ve been sharing that relationship with their favorite binge-worthy show, ’90-Day Fiancé.’

When asked what he most wants his audience to know, Brickey doesn’t hesitate, “That I love them. I'm so honored to have them and to serve and entertain them. They think that I work really hard for them…but it’s the other way around. I am way more addicted to them than they are to me.”

See all of Mark’s DCON interviews with top artists simply by registering to our NOT REAL ART School today. It’s FREE.

And, be sure to follow Mark on social: @aidpodcast, @markbrickey