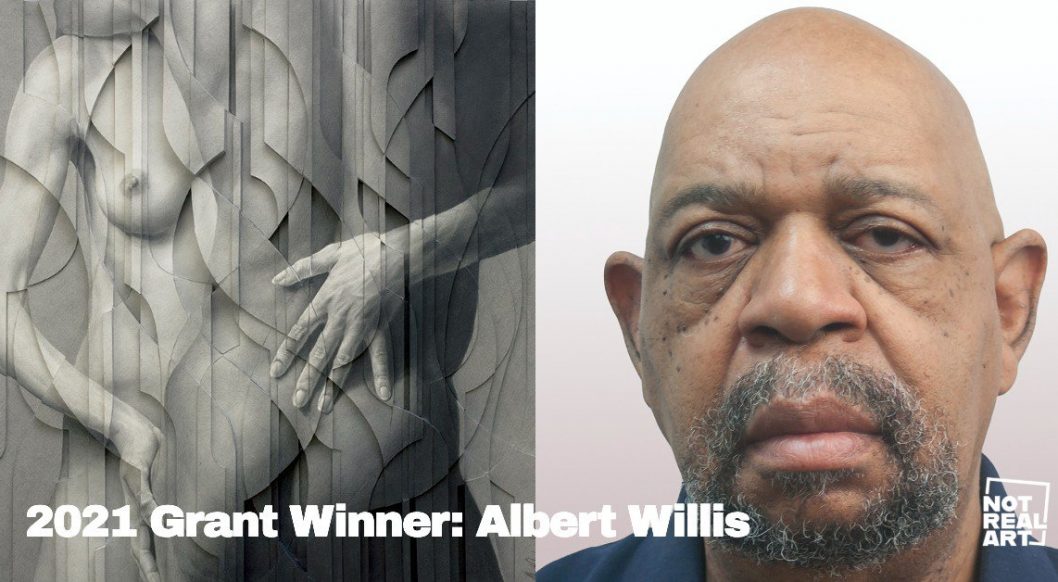 Grant winner, Albert Cleophus Willis, who prefers to go by ‘Cleophus’ in the fine art world, was a little surprised when he won the 2021 Not Real Art Grant because he wasn’t sure his art would be categorized as not real enough. “I feel like I've been discriminated against because my art is so traditional. I think people view it as something that's been done, rather than what it is that's being done. I'm one of those artists who shies away from interviews. I think people should focus on the art rather than the artist, even though I know this is naive because people really are buying a piece of the artist. But I hope that one day, they will look at the art and let the art stand on its own.”

“Being a historian of art, there's always been a person like me clinging to the past, but blending with the future.”

Cleophus grew up in South Central Los Angeles, the second eldest son of a preacher who also had his own church in L.A. His mother was also an evangelist. His early memories of childhood touch on “struggles with dyslexia and remedial reading classes. But I adapted and I outgrew it, and I had my normal, rebellious nature in junior high, got kicked out of school – all that kind of stuff. I didn't realize that art was something that I wanted to do. I always drew pictures, but nobody took it seriously. I didn't either. I just enjoyed it. But once I got into high school, I had to take an art class as a requirement and one of the teachers said I ought to apply for some of the scholarships.

“I graduated from Belmont High School in Los Angeles, which at the time, had a heavy foreign exchange program, one of the best in the country. My class was phenomenal. Then I won a scholarship to the Chouinard Art Institute, but even that was very accidental. I didn't get it from the school itself. I got it through my father's local union, which was the Laborers’ Local 300. My dad did all kinds of pick-up work. He'd repair houses – he worked all the time, actually. And I was fortunate enough to go to Chouinard.”

When asked about his early work, Cleophus recalls his first live nude model class while he was a senior in high school. “I remember there was a large-sized lady, a nude model, in one of the afternoon classes. I had to get parental consent to go to the art studio! Now, of course, I'm thinking playboy and all that kind of stuff. But I get there and there's this oversized lady who’s world-renowned and famous, whose name I can’t remember now, but she modeled all over the world and was very…I mean, I'm talking about folds and folds of extra weight. I guess the class assignment was one of volume, as opposed to, what you would normally consider ‘perfect proportions.’ Anyway, I remember that as one of my highlights. I learned a lot from that class.”

Cleophus reflects on his process as “rather methodical. I see everything done before I start. I don't know if there's a particular inspiration. Right now, my focus is on three-dimensional art. I've always had insight and been a visionary in the art world. I've always been a little bit ahead of the curve and in my perception of what the future could possibly be. I know where the future's going in art. I want to combine my technical skills because you don't see those kinds of skills used too much today and in the newer technology. So in doing that, when I approach a piece of art, I actually look at the objective of where I'm trying to go.”

In his Not Real Art application, Cleophus further defines his process for creating shadow art. “My objective is to create a visual interaction between the art and the observer. A forever-changing play of light and shadow. The art image is not only affected by reflecting colors and intensity of light, but also by the proximity and movement of the observer in relationship to the art surface, to possibly literally never be seen in quite the same light again.”

“In today's world, I define art as something that's unique but not void of craftsmanship. Because I think that's the defining factor. The visual arts shouldn't separate themselves from all the other arts, in my opinion. I mean, a dancer becomes a skilled dancer. She or he is an artist because of the skill that they develop within a tight realm. So when I go to define what I do as an artist, or what my role is right now, I feel like I'm part dinosaur. As far as what I do, I'd like to be able to not push the envelope, but fold it back a little bit. Being a historian of art, there's always been a person like me clinging to the past, but blending with the future.

“A person could spit on the sidewalk and invite you to find that art. And that is not enough.”

“You could say something like, ‘every expression is art, and all it takes is an expression to be art.’ Then a person could spit on the sidewalk and invite you to find that art. And that is not enough. Yes, you should be able to express yourself, but with some rules, and you should be judged by the past into the present, with some insight into the future. When I look at art today, I worry that it will become mediocre and the only way you can stop that is to make sure that some of the past is merged with the future.”

At 77, with a bevy of artistic works in his repertoire, Cleophus knows something of the past and where he, and art, is headed. He returned to college in his 50’s to sharpen his computer skills, knowing he’d need them in his work. He likens the future to the film, Blade Runner. “That, to me, is a very true reflection of how we will be living in the future. We'll be moving upward and space will be limited. My vision of the future 25 years ago, is to some degree being realized today, where we will use holograms. I think we will rent images, just like we rent videos. They will have all the feeling of three-dimensionality that we would have, live in our houses.”

Cleophus says the challenges of being an artist revolve around time, space, and resources. “I've been in a survival mode for a long time…Right now, I'm creating in a 10 x 12-foot room and my art is very big. Everything I own is in two storage units and is packed full of art that I'm trying to sell. If you're not part of the collegiate academia, it's very hard to get into the fine art realm of things. But, I'm an innovator. I've done a lot of firsts and I'm doing stuff that's revolutionary now…As you know, I’m 77…and I have made certain inventions. As a matter of fact, a lot of the tools and materials that artists use today, I've been a part of that. I created those materials.”

“If one picture's worth a thousand words, then in a few chosen words with one picture, it speaks volumes.”

When it comes to the message behind his art, Cleophus shares his philosophy, “Like the saying, ‘A picture's worth a thousand words.’ Well, my philosophy of the pictures is that if one picture's worth a thousand words, then in a few chosen words with one picture, it speaks volumes. And that's what I try to do whether I'm working with the abstract or not. Within the title of an abstract piece, I'm actually saying a lot. I want it to be a living piece of art.”

The best thing about being an artist is…

“To visualize something and to enjoy seeing it completed as if someone else did it. I know that's sort of abstract. Most artists say they enjoy the journey. But it's almost like I'm racing to the end to where I can just look at it. And when I do something that I think is remarkable, it's not me doing it. It’s like a chill that I get. Not ‘damn me for being so great,’ but maybe a god or some force did it and I didn't do it. That's what I get from art.”