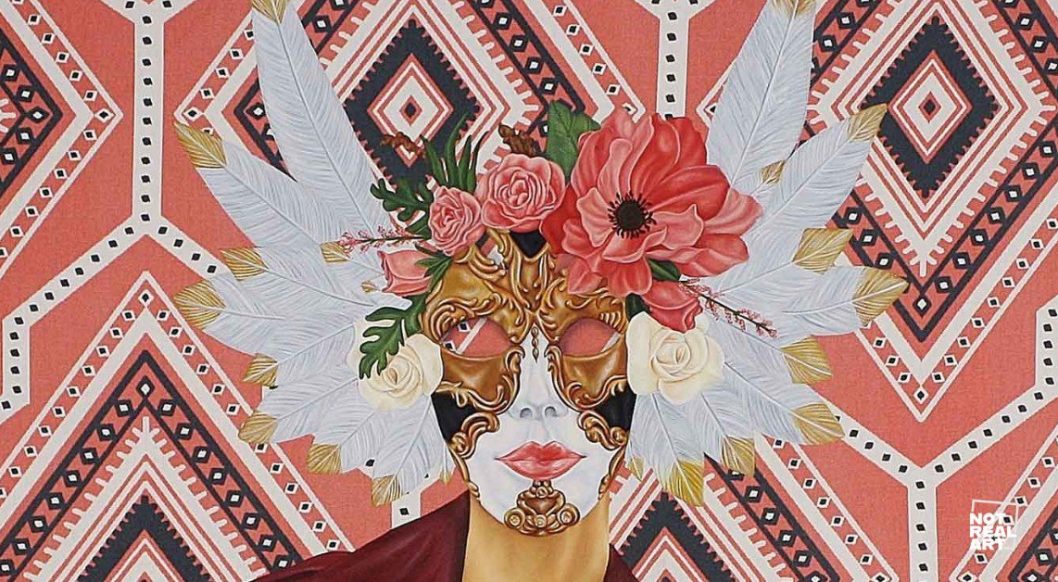 “In this century we have made remarkable material progress, but basically we are the same as we were thousands of years ago,” the current Dalai Lama, Tenzin Gyatso, has said. Mixed media artist Alea Hurst agrees. Her ongoing mask series penetrates modern anxieties surrounding class, status, and capital by reassuring viewers we still have common ground to stand on.

Far from establishing common ground, masks typically hide, conceal, or obfuscate. Hurst flips the expected script in her series, creating characters who reveal themselves in eerily familiar ways. Drawing on Carl Jung’s idea of the collective unconscious, Hurst ritualizes the act of mask-making to express the archetypal forces driving our thoughts, actions, and feelings. “The concept is to explore the idea that no matter how far society has evolved, the basic instincts and personality traits of ancient cultures still prevail,” says Hurst, who incorporates both ancient and self-created mask designs into her series.

Enveloped in patterned fabric, Hurst’s subjects seem to rise and sink simultaneously, their social status cemented with business casual clothing. “[The clothing] is representative of upper-class society and how far they have advanced in a material and monetary sense,” Hurst tells NOT REAL ART. “The high-class business attire […] juxtaposes the primitive with the refined.” She adds: “Archetypes still recur age after age, no matter how advanced the society. Ultimately, we have not come as far as we think.”

“Archetypes still recur age after age, no matter how advanced the society. Ultimately, we have not come as far as we think.” —Alea Hurst