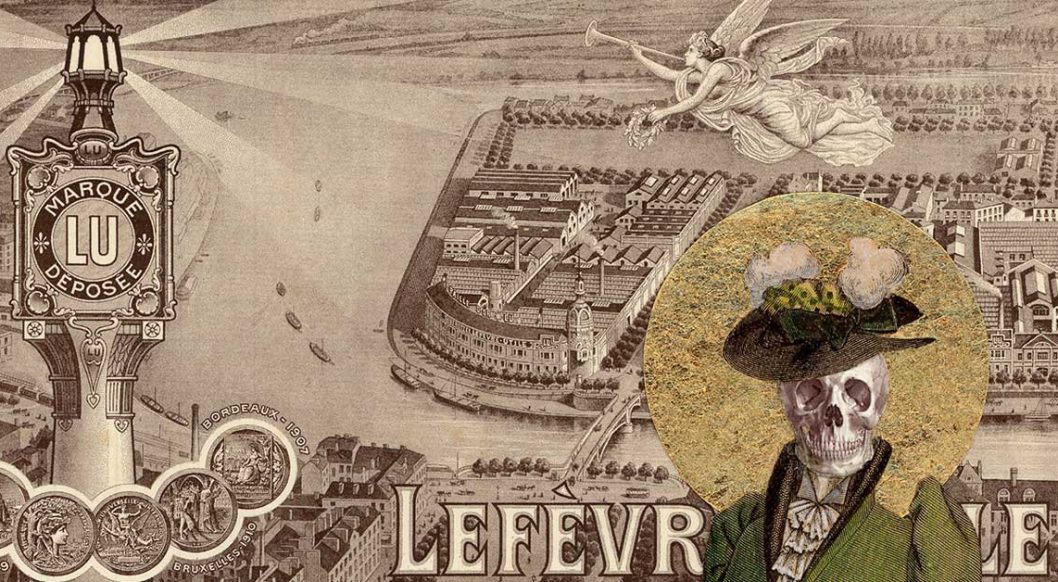 Alexandra N Sherman Recasts Women in the Role of Death

That work is part of Alexandra’s recent series Death Becomes Her, which combines collage fodder in the form of antique ephemera, colored pencil, and decorative paper. Having grown up in the antique business, Alexandra gravitates towards materials with a history. She received the 19th-century women’s magazine used in “Things That Should NOT Be Left Unsaid” as a gift, and it instantly sparked her imagination, along with plenty of irritation. She notes in her artist statement: “This periodical was a fascinating window into the past that included the latest fabulous fashions of the day but also a lot of bad advice for women, much of it authored by men, regarding their health and numerous opinions about how they should conduct themselves.”

After imagining the women of that time—oppressed and subject to unhealthy levels of mansplaining—Alexandra chose to render the women as death itself, as skeletons dressed in vogue fashions. “It felt empowering and liberating to cast death as a woman outside of her normal life-giving role,” she says. “She is dressed impeccably, her posture perfect, a complete lady.”

Death Becomes Her carries every wave of existential dread Alexandra felt over the last few years. The first wave came fast, churned up by the pandemic. The second, a tidal wave provoked by the climate crisis. The third, a pounding, relentless wave—Russia’s war on Ukraine. Though waves of dread keep rolling in, her series uses humor to distract from the suffering. “Sometimes, when everything seems awful and absolutely hopeless, the only way to carry on is to laugh,” she says. “I hope these works will provide a moment of mirth in these dark times, even if it is from the perspective of the gallows.”

“It felt empowering and liberating to cast death as a woman outside of her normal life-giving role. She is dressed impeccably, her posture perfect, a complete lady.” — Alexandra N Sherman