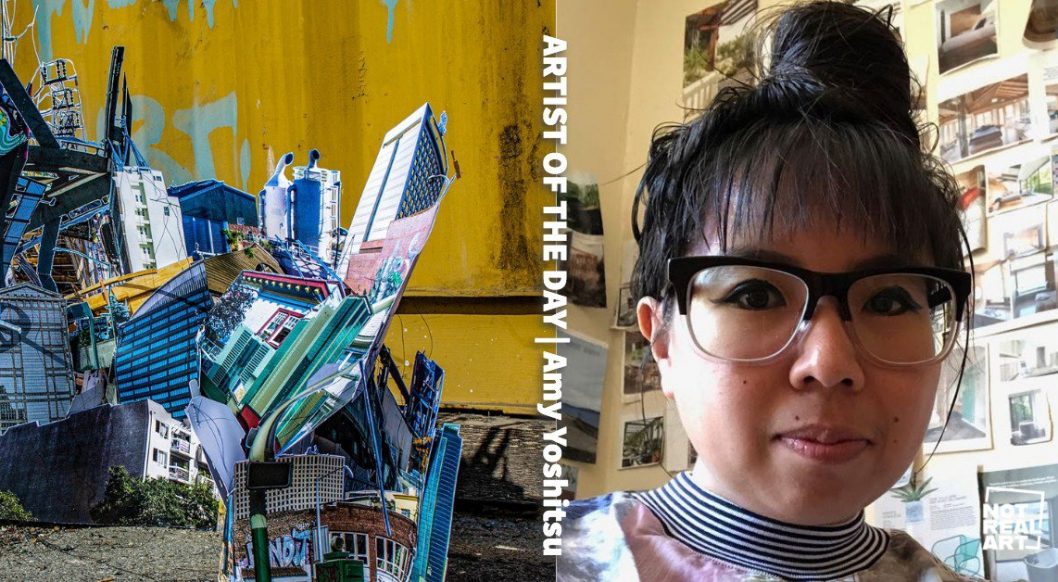 How Multimedia Artist Amy Yoshitsu Plays with Our Perception of Scale

Amy Yoshitsu describes herself as the “only child of big-dreaming Asian-American artists.” Her meticulous paper installations of urban environments look monumental in scale, but are smaller than they appear. Turning her camera on buildings, windows, sidewalks, and street signs, she weaves together elements of the world around her and repurposes them for her own ends.

Yoshitsu started out studying math and psychology, but shifted to sculpture and critical studies. Inspired by her mother who is a painter, her father who is a musician, and her seamstress grandmother, she learned to weld and stitch and created her own “psycho-geographic map.” In her recent “20XX” series, Yoshitsu photographs ‘office buildings, factories, and mom-and-pop storefronts’ from a wide range of locations. She prints the images on paper, constructs fictionalized 3-D worlds, and rephotographs them in San Francisco Bay-area environments.

Yoshitsu combines sculpture, photography, assemblage, and collage to explore issues of identity, memory, and cultural expectations. She uses a low camera angle to toy with the viewer’s perception of scale. Her architectural facades and trompe l’oeil installations address her own experiences of displacement within public and private spaces.

I photograph every image and, when on foot, I am conscious of my body’s vulnerability, given its size and perceived gender, in public space. As someone whose experience is that of an outsider to the perceived normal and default identity, but also not an insider to my prescribed racial demographic, I feel ambivalent in many locations, especially those outside of the US. My own losses and my own imperialism, by virtue of my ethnicity and nationality, are always on my mind.

After earning her Bachelor’s degree at Harvard, Yoshitsu spent a semester in an MFA program at the California Institute of the Arts, but had to drop out because of family obligations. She recently formed the digital design cooperative, Converge Collaborative, and was an Artist in Residence at Esalen in spring of 2021. While juggling the demands of being an artist, with family and professional concerns, Yoshitsu weaves experiences from growing up in an assimilated Japanese-American culture into her work. Her ephemeral mixed-media constructions explore how moments of connection and displacement shape the way she perceives and navigates the world.

As a sculptor, I locate my practice in relation to the world of object-making. Infrastructure encompasses public creations that affect the private and psychic spheres at grand scales but are often overlooked or hidden. Electrical pylons, utility cover, traffic signs, are site-specific objects with aesthetics primarily influenced by technology, time period and ownership, instead of the visual zeitgeist. They are built in response to a subset of human needs but are simultaneously physical markers of systems that facilitate social divides. In featuring temporarily visible infrastructure (e.g. the frame of a building) only seen during the creation and deterioration/deconstruction phases, I highlight the value of process, which is too often subordinate to “finished” products and facades.

20XX are a series of sculptures (and their resulting images) that contort and amalgamate our shared, built environments, which are embedded with histories of society-building through physical interventions. These 3D collages visualize the the variances in the materials, aesthetics and definitions of shelter; corrosion and states of disrepair; acts of self-expression through graffiti; displays of wealth through orderliness; and office buildings, factories and mom-and-pop storefronts as markers of personal means of survival and the shells of capitalism's many engines/victims. My advantages and ambivalences within global, public spaces are visually synthesized, and literally located, in my hometown area, the East Bay.

I photograph every image and, when on foot, I am conscious of my body’s vulnerability, given its size and perceived gender, in public space. As someone whose experience is that of an outsider to the perceived normal and default identity, but also not an insider to my prescribed racial demographic, I feel ambivalent in many locations, especially those outside of the US. My own losses and my own imperialism, by virtue of my ethnicity and nationality, are always on my mind.

While acknowledging my own viewpoint, I focus on what connects and affects us all: what we visibly—but not necessarily physically or culturally—have access to, and the material language, lifespan and histories of cement, steel and wood. I imagine the thoughts and feelings of the humans whose labor went into constructing a retaining wall, repairing sidewalks and installing the sheetrock in the building. I pull back and see the social and commodification webs in which all of us work and struggle to survive and thrive. We must all grapple with the lineages and systems of our landscapes: generations of housing segregation, the shifting of the attention economy from the road to the phone, and the privatization of utilities.

I meditate on each image as I prepare it for printing, and while meticulously cutting out skylines and separating sidewalks from structures. I choose to include indicators of time and place and discard imagery that I view as perpetuating toxic power. The collaging process is like creating my own psycho-geographic map—I sew together pieces of way finding in Philadelphia, scaffolds for buildings in Jodhpur, and window frames of Oakland apartments, and am able to remember the physicality and emotions of being in those specific places and moments. Numerous seams eventually create micro-conversations between aesthetics and neighborhoods to form a freestanding assemblage.

Adding another layer of place and scale, I photograph each sculpture in various Bay Area locations. While the massive heights of some built environments displayed in the sculptures are rooted in capitalist and patriarchal domination, my work seeks to offer a more humble perspective. Images of the sculptures are captured from three inches to three feet off the ground, thus allowing skyscrapers to be dwarfed by fire hydrants. The ultimate views of the composite cities are from the level where everyone must step. The images of the sculptures are printed in calendars which I gift to more than 200 people in my community. In bringing public landscape into one’s private timeline, I hope to spark thoughts about the complexity and interconnectedness of each person's existence in our collective environments.

My community of friends and mentors, collected from multiple periods in my life, may spot their neighborhood freeways or historic buildings interwoven into the many layers. This practice of yearly and mass gift-giving, like many aspects of my assimilation culture, follows a family tradition rooted in Japanese practices of appreciation and reshaped by experiences of both traumas and achievement in the US.

I have included this as an example of the type of multi-sculptural installations I would like to create again.

I am a sculptor and multidisciplinary designer focused on the relationship between the individual and systems. Driven by identity and heritage, I explore how interpersonal relationships and schemas are defined by and impact cultural, political and economic structures.

The only child of big-dreaming, Asian-American artists, I am shaped by multigenerational trauma and isolation incurred from ambitious striving within gas-lighting white supremacy, patriarchy and capitalism. I contend with the morality and meaning of being an artist, especially following the financial and emotional challenges—and privileges—within my family. Having been born into expectations of responsibility and care giving, while also raised to learn mentalities in service to individual achievements at all costs, I am currently focusing my creative queries around the myths of individual responsibility in relationship with systemic oppression.

My painter mother, musician father who worked as a contractor to make ends meet, and seamstress grandmother were the initial inspirations for me to create from industrial, environmentally-conscious, and textile materials and imagery. I have learned to construct their narratives into my own heritage identity—textured by variants rewoven with each new understanding of pre-Communist China, the experiences of fleeing war and revolution, Japanese-American Internment— and connect to those whose lineages are also defined by human-made power structures of assimilation, imperialism and colonialism.

Raised in Berkeley, CA, I experienced culture shock as an undergraduate at Harvard University, which was an eye-opener to the spigots of power and wealth. I focused on sculpture and critical studies—after initially exploring math and psychology—as they synthesized and produced from the practices and research of disparate fields. I learned to weld large-scale installations; studied philosophy and theory in relationship to aesthetics, film, and the urban environment; and was a zine librarian in the punk and DIY community of Boston. I also gained a sustaining love and connection to the abstraction and materiality of artists such as Eva Hesse, John Chamberlain andRichard Tuttle. My work strives to manipulate physical media to create new perspectives on our culture and mental maps.

After graduation, I enrolled in the Studio Art MFA program at California Institute of the Arts where I met many wonderful colleagues but resigned from the program after one semester in response to financial and family responsibilities. Thus, for the past decade, I have been a digital designer separately committed to sculpture. I am now reframing art, job, and personal life into interconnected nodes of a greater practice. Along with allies, I am building a creative worker’s cooperative, Converge Collaborative, which operates as a digital agency.

As creators of color, we are assembling social and economic infrastructures committed to deep trust and boundary-affirming, mutual support. The process of trying to establish a new model for work based on equity, solidarity and inclusion of cultural and emotional contexts has provided me and other member-workers with the psychological and logistical resources to pursue personal and/or artistic ambitions while responding to financial responsibilities. We want to continue to grow, proliferate this model, and help others achieve this difficult balance as well.

Amy on the Web And Social Media

Here is where to find out more about Amy Yoshitsu on the web and social media: