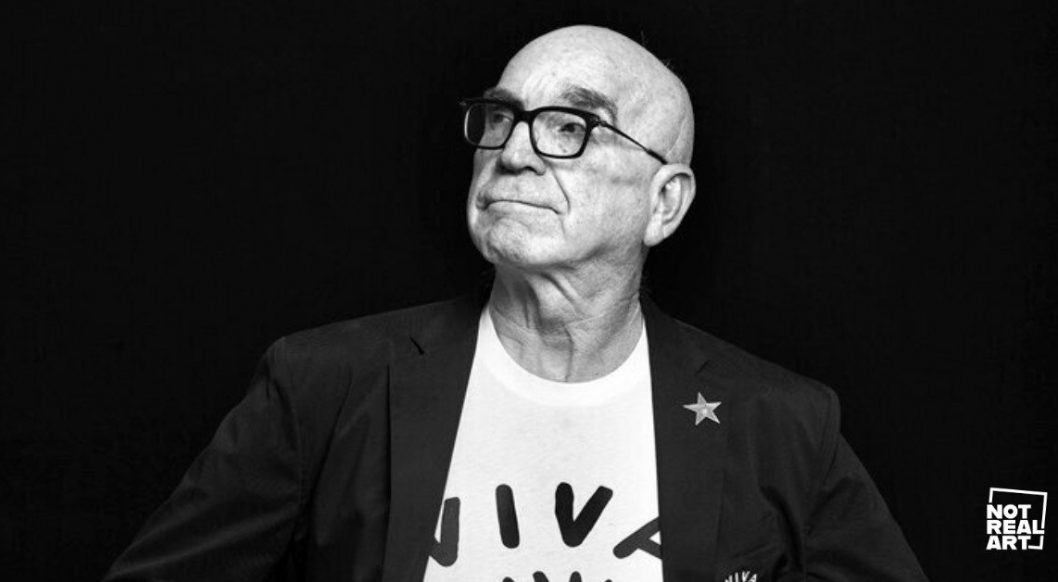 Andre Miripolsky: Born to Be an Artist

Today on the Not Real Art Podcast, we have the pleasure of introducing you to world-renowned artist, Andre Miripolsky. As colorful as the art he creates, Andre’s signature style of pop imagery is bright, whimsical, and energetic, and he has collaborated with the likes of Bette Midler, Quincy Jones, Robin Williams, The Rolling Stones, and MTV, among others. His work exploded onto the scene in the 1980s with the design of Elton John's famous ‘piano jacket’, and he is best known for his Fear No Art series, the Miripolsky Art Barbie, and his Absolut Vodka illustrations from the ‘90s.

“Many artists that become successful as their lives go on really did find themselves at a young age. I do feel that I found myself through the artwork at a young age. In that regard, I feel very blessed because it gave me something to do and it gave me something to keep myself excited about: the concept of making something out of nothing—from your brain to your heart to your hands—and, at the end of that day, you actually have a product. You actually have something that is substantial. This is my famous line but I honestly did; I sold my first painting at 10-years-old to the American ambassador in Indonesia.” — Andre Miripolsky [0:16:10]

In this episode, Andre shares some insight into his career, his upbringing around the world, and what led him to ultimately settle in Los Angeles. Tuning in, you’ll learn more about his iconic Viva LA! Program, which celebrates the power of collaboration and the incredible, dynamic people that make LA one of the most creative cities in the world, and we dive into how Andre is embracing cutting edge technology as he ventures into the world of NFTs with his distinctive shark characters. Andre believes he was born to be an artist, which is clearly evident as we dive into his story. So, for a fascinating discussion with one of the most brilliant creative minds of our time, make sure to tune in today!

We kick off today’s conversation using the title of this podcast as a stepping stone; what constitutes ‘real art’? And how does Andre Miripolsky’s work fit into that framework? As you’ll discover, we conclude that art and information are equally subjective, depending on who is evaluating them! Andre goes on to tell an interesting story about why he isn’t a French citizen, despite being born in Paris, and we find out why he says he received a tremendous art education “by osmosis” by the time he was two-years-old and how he sold his first painting by the time he was 10.

“Many artists that become successful as their lives go on really did find themselves at a young age. I do feel that I found myself through the artwork at a young age.” — @Miripolsky [0:16:10]

Andre believes he was born to be an artist and he shares how he found himself through art at a very young age, also elaborating on the importance of branding for artists, as he learned when he was running for student council president in his senior year! We delve into the role of marketing and promotion in the NFT world, some of the challenges Andre has encountered as he explores the virtual art world, and some of his partnerships in this space.

“Here I was, an artist. I wasn’t dead, I wasn’t injured forever. I felt that I was an artist [that was] given this incredible opportunity. As an artist, in my head, it was always about relating to your life experience, always using that for your art.” — @Miripolsky [0:40:52]

We also learn how he has embraced cutting edge technologies and processes throughout his career, going all the way back to his collaborations with MTV and Absolut in the ‘90s. He shares how he has always risen to the occasion and made the most of the opportunities presented to him, even in dire circumstances, and he tells the story of the near-death experience that led him to create one of his best-known bodies of work, Fear No Art, in the 1990s and how he made rock and roll history by designing Elton John’s famous ‘piano jacket’ in the 1980s.

You’ll find out why Andre attributes his success as an artist to his ability to adapt his energy to the different ecosystems of the art world and he elaborates on his involvement in the Viva LA Music Festival via his iconic Viva LA! movement. If you’re looking to get your hands on an original Miripolsky NFT, Andre shares some information about the SharkTales Art Club and his partnership with the Beneath the Waves Foundation, which you can also find on Openseaand NFTG.

You can stay up to date with Andre’s work by following him on Twitter @Miripolsky or @SharkTalesArt and on Instagram @andremiripolskyart.

Thank you for taking the time to listen to Not Real Art, hosted by Scott “Sourdough” Power.