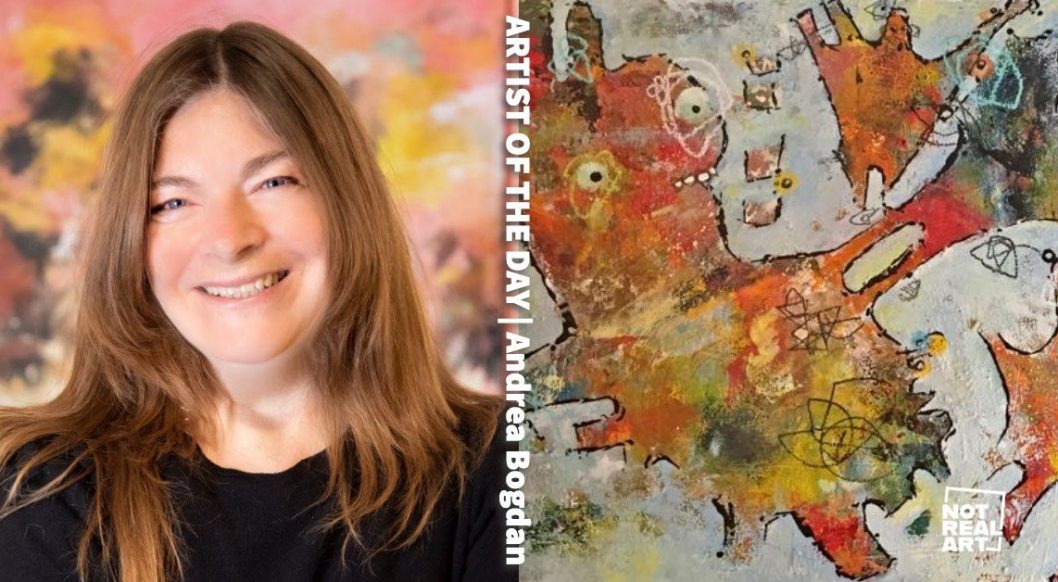 Angela Bogdan’s eclectic art studio is located on the mezzanine of The Last Bookstore in downtown Los Angeles. She keeps it open 45 hours a week. When Bogdan was growing up, she had no idea that being an artist was a viable profession. But after being inspired by a group of Latina artists who subsisted on their art, she opened a studio nine years ago while working at a nearby hospital. Because of its location, she meets all types of artists, “from hip hop to symphony, and from crump to ballet.” Their stories have a profound influence on her work.

Bogdan’s vibrant acrylic canvases, painted clothing, furniture, wall hangings, and mobiles have a playful sense of primitivism. Her figurative renderings evoke thoughts of Lascaux cave paintings and etchings by Dubuffet. Incorporating found objects and images of imaginary creatures into her eclectic mixed-media work, she depicts “imperfect living souls tethered to earth, caught in a sweet moment in time, with their blemishes exposed.” By keeping her studio open to visitors at all times of day, and allowing them to observe her in action, she makes art accessible to viewers of diverse backgrounds.

I believe self expression is an essential part of being human, and I've noticed that a lot of people who buy my fashion ideas (I paint on and edit clothing) are artists themselves, so I'm always exchanging info on techniques and materials with fashion designers and street artists that come into my studio. I think of my studio as a place that should inspire, no matter where you are in life, and the conversations I have here are a huge part of my process. Especially if it entails encouragement for a creative person who is having trouble starting or re-starting. I want to be remembered as that person who helped them round the corner to a place where they feel more capable or hopeful or decisive about making art.

Bogdan’s open approach defies the notion of the tormented artist working alone in the studio. Her welcoming atelier is a haven for artists, designers, curiosity seekers, and book lovers. She enjoys interacting with the wide range of people who stop in to swap stories, discuss creative techniques, or share something on their mind. Her proximity to a literary mecca allows her to “fulfill her mission to introduce the idea of art collecting and art-making to people of all ages, nationalities, abilities and income levels.”

Bogdan considers herself ‘established’ in downtown Los Angeles, but ‘emerging’ everywhere else. Like many artists, her livelihood has been impacted by the pandemic. She was forced to lay off her assistant husband, and had to retool her practice. As she continues an ongoing dialogue with the people around her, and is influenced by their stories and diverse outlooks on life, it seems apparent that her welcoming creative spirit will see her through.

I paint the human spirit.

individuality are common in

the beings I create.

They are imperfect living souls

in a sweet moment in time.

with their blemishes exposed.

They are embarrassed, courageous,

satisfied, and we see it and

we see it, and we know

know how it feels because

we are human, too.

I paint the pursuit of

This painting was inspired by a good friend who told me a story about feeling less attractive than his siblings because his skin was darker than theirs. People tell me a lot of interesting things in my studio, especially when I'm painting.

I made this for the 10th Anniversary Group show of the Cactus Gallery, which is the gallery I spoke about in the answer to the question about alienation – in this case, this gallery welcomed me.

Andrea Bogdan is a full-time painter working in acrylic and mixed media on wood, canvas, found objects, mobiles, fashion and furniture. She opened her studio practice in 2012 in downtown Los Angeles while working her hospital job during the day. Her public-facing art space on the mezzanine of the popular Last Bookstore allows her to fulfill her mission to introduce the idea of art collecting and art-making to people of all ages, nationalities, abilities and income levels.

Andrea on the Web And Social Media

Here is where to find out more about Andrea on the web and social media: