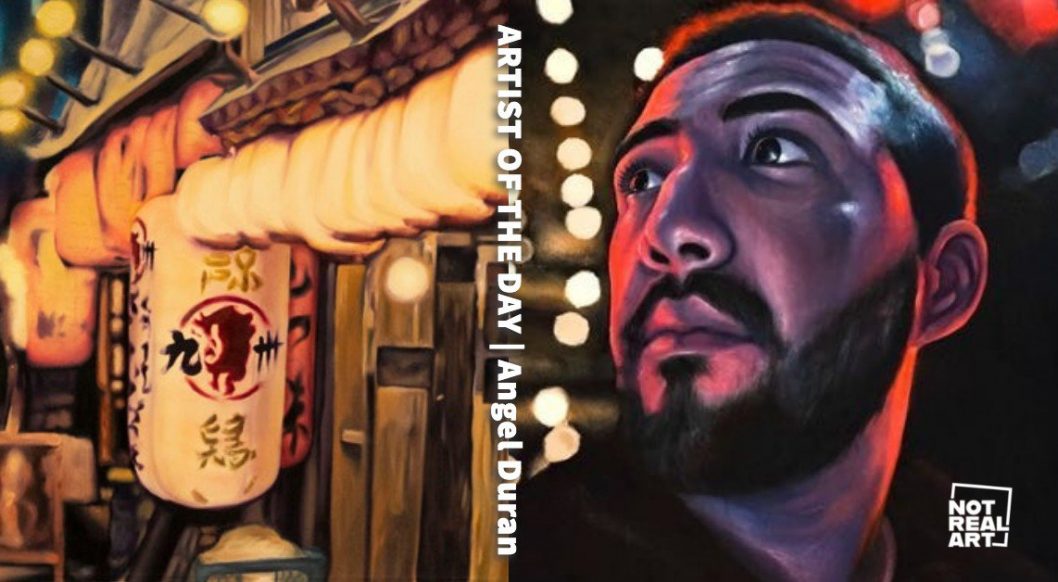 Angel Duran’s evocative views of the street blur the lines between painting and photography. Duran co-founded the art collective 'BOKEH', a supportive multi-media platform where artists can interact. He defines ‘Bokeh’ as “the aesthetic quality of the blur produced in out-of-focus parts of an image.” Using photographs for inspiration in his large-scale oil paintings, he addresses the paradoxical solitude of city life.

Duran was raised in New Jersey by immigrant parents and earned his BFA in painting from Rutgers Mason Gross School of the Arts. He cites Gerhardt Richter as an influence in his explorations of the relationship between photographs and painting. Using selective focusing to investigate the qualities of artificial light in urban environments, he creates luminous tableaux of lone figures wandering at night. Duran’s reflective street scenes and self-portraits resonate with emotion and invite viewers to draw upon their own experiences of isolation.

As an artist of Dominican descent who graduated from art school during the pandemic, Duran often felt like he was looking from the outside in. He articulated those feelings through painting and created a platform to connect with other artists who were struggling like himself.

I earnestly believe that all minority artists have felt unwanted within the art world at one point or another. Truth of the matter is, the art world is a Caucasian-male dominated field. And this all comes down to the resources that are available to us– and unfortunately these resources aren't spread out evenly. It's this imbalance of resources that helps foster that feeling of being unwanted. It's that very belief that led to the creation of BOKEH. Although there are many institutional resources available to artists, the sheer number of talented minority artists I know — who are consistently producing great work, yet floundering without direction — continuously reminds me that their is still a gaping lack of support for many young, aspiring artists.

Duran’s paintings give insights into the flaneuring life of an introspective young artist navigating the complexities of urban existence during unprecedented times. His sensitivity to the world around him, and his subtle renderings of emotion and light, are a testimony to the power of art to illuminate, connect, and transform.

Fundamentally, Duran’s works serve as an exploration of the relationship between painting and photography. Thematically, they inquire into the role urbanization plays in social fragmentation and the disintegration of human interactions. By often depicting isolated figures roaming through empty and artificially-lit cityscapes, his hope is to highlight how—instead of forming intrapersonal relationships—metropolitan areas can help foster the feeling of isolation; But also, he hopes to form a communal experience built upon our shared moments of isolation.

A frequent technique Angel Duran incorporates into his paintings is the bokeh effect found in photography. Bokeh is defined as the aesthetic quality of the blur produced in the out-of-focus parts of an image; however, his intention is not to simply paint blurry photographs, but rather, to address a hierarchy through blurring. For example—while still able to use figures as his prime subject matter— the blurring of the image allows him to investigate artificial light as its own subject matter. Everything becomes equally important and equally insignificant. What is left is emotional resonance.

Applying this idea of the aforementioned hierarchy between painting and photography, he incorporates qualities traditionally considered unique to photography into his paintings. Distorting the subject allows for the bridging of the two in much the same way as contemporary artist, Gerhard Richter. The process in which these pieces are created—by stitching, collaging and photo-shopping seemingly unrelated photos to create a seamless image—relates strongly to the falsification of social media and technology’s encroachment on art. On can argue that this process also lends itself to politicization—as it allows Duran to fully dissolve pre-existing social and political binaries in order to create images as he sees fit.

I was born and raised in New Jersey by immigrant parents and am of Dominican descent. The majority of my career has been based within the tri-state area. I received my BFA from Mason Gross School of the Arts in 2020 with a concentration in painting. During my studies, I was awarded the Gerard Russoniello Memorial and Barbara And James Betts scholarships, as well as the Art & Design Department Conmencement Award. Additionally, during my junior year, I was nominated for the Yale Norfolk School of the Arts Summer Residency.

Most recently, I co-founded 'BOKEH'. Which is meant to be a creative art collective: a multi-platform where a community of creators can interact with one another and help foster each’s creativity. Be it film, art, literature, photography, etc. It’s all about artistic expression and coming together to collaborate and bring all of our unique artistic viewpoints into focus.

Angel Duran on the Web And Social Media

Here is where to find out more about Angel on the web and social media: