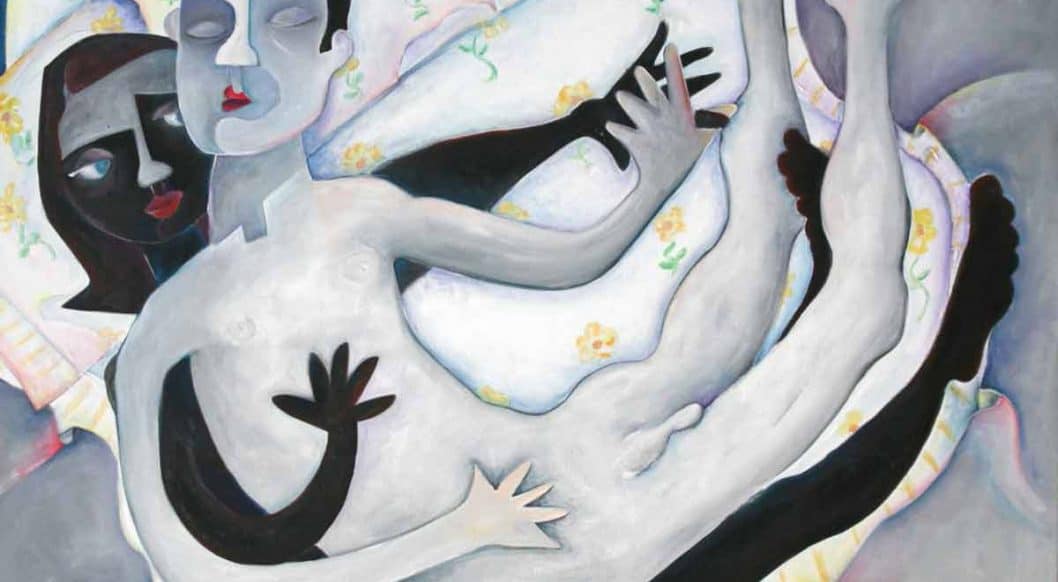 Early in life, artist Ted Meyer was frequently sick. Since then his work has focused on the physical sensations the body absorbs over a lifetime of joy and suffering. Densely populated with whimsical figures that seem to float in space, his paintings suggest lighthearted fairy tales or personal memories rife with emotional nuance.

Meyer’s unique style is influenced by several masters of the Modern era, including the French-Russian artist Marc Chagall. Instead of rendering his scenes with pictorial logic, Meyer finds ways to express emotions and memories through surrealistic dream-like sequences.

Still, there’s more to Meyer’s work than fantastical imagery. Though sublimely beautiful and often humorous, his work is also steeped in themes of survival, sex, and illness. The issues of human fragility, trauma, and corporeal transience are all topics he seeks to address in his figurative work. These days Meyer is a patient advocate who gives lectures about living as an artist with a chronic illness.

Reflecting on this particular aspect of his work, he observes: “For years I have focused my work on medical issues. I’ve painted pain and frustration. I had no interest in anything external. Any work that was not specifically about health was about the body in general.”

Ted Meyer discusses growing up with “Guernica,” showing strength with a chronic illness, and the simple pleasures of falling asleep on the coach with your cat. Scroll down to see more amazing images of Meyer’s work and read about his personal experiences in the art world.

What one book belongs on every artist’s shelf?

TM: I think that would be Wifredo Lam. I love his work. His painting "The Jungle" always amazed me. I first saw it at the Studio Museum in Harlem. Reading up on the piece, I learned that while Lam was working on it, he knew it would be his signature piece. I've always wondered what that pressure felt like. How do you go into a new piece with the knowledge it will be the one you are remembered for? I'd love to ask him that question.

TM: I have two tracks with my art. One is based on illness and scars. This work is all about survival and involves not only my work but curating other people's work into shows around the country. I have always believed that artwork about illness is also about depicting strength. My other work is more personal, playful, and colorful. This work highlights figures and animals. I tend to alternate between the deadly serious and the lighthearted.

Do you prefer New York- or Chicago-style pizza?

TM: That answer has changed as my career has progressed. I have done free early in my career to build recognition, but it was all part of a bigger, long-term plan. I have given lectures for free because early on I needed to practice and develop a speaking style.

I am currently the artist in residence at the Keck School of Medicine at USC. When I first developed the idea of bringing artists into a medical school, I approached UCLA. Since they had no idea what I was proposing, they gave me wall space and some authority but there was no budget. That seemed like a good opportunity to build something important, so I accepted. Some time later I was poached by USC and now have a paid position there. That would have never happened if I hadn't built a foundation to prove that my ideas were worthwhile.

TM: It sounds almost pedestrian to say, but Picasso. When I was kid growing up in NYC, "Guernica" was still at the Museum of Modern Art. I was pretty captivated by it. I still have vivid memories of walking in and seeing that image—even as a seven- or eight-year-old, I was taken by the narrative. I've always gravitated to narrative images, and I'm pretty sure that is where it all originated. As I got older other painters have become major influences, such as Chagall and Beckman. I love all the early 20th century German painters.

TM: Falling asleep on the couch at night with a cat on me.

TM: In 2016 I did a TedMed Talk where I discussed my life, art, and curatorial projects. Through their online video, my work, especially "Scarred for Life," has reached thousands of viewers, many of whom are patients from around the world who want to share their art or survival stories. I'm always grateful when someone takes the time to track me down and write me. I never know what I'll find in my email inbox: A story about illness, a picture of a shark bite. People from all over the world have enough trust in me to share their experiences.

TM: When I was younger I was sick a lot. Angry a lot. In my mid-twenties someone suggested that an angry mindset might not be working for me. I spent so much wasted energy being angry. Eventually, I retrained myself to let things go. It took about a decade and is still a work in progress. Trump didn't help on that score.

TM: Yes and no. I think some people can come right out of the gate running and don't need it. They have the skills and vision. A lot of people, like myself, never had actual art instruction until they got to college. But most need basic drawing and observational skills that require the structure of school. And of course, the contacts you can make at a good school are valuable later when you want to show your work and get representation.

TM: The way work is sold and resold without artists receiving any of the increased value of their work. The whole blue chip gallery system really only works for the gallery owners and investors/collectors. And it goes without saying, but I will say it: There's not enough representation of female and minority artists.

TM: Covid has had a big effect on my career and practice. A number of projects are on hold. The shows I've been curating at USC are now all online. My speaking engagements have almost totally vanished. I still have a few online presentations, but these just don't compare to giving a live talk to a large auditorium of people. I really miss the travel. My paintings have oddly become more playful, affected by my time isolating out in the desert near Joshua Tree.

TM: I'm working on a documentary film about my neighbor out in the desert. He is a 64-year-old outsider artist who sculpts birds and dinosaurs out of found wood. It might come out great, or it might suck. But it is something new.

Want to be featured in Q+Art? Email editor@notrealart.com with a short introduction and a link to your online portfolio, or three images of your work.