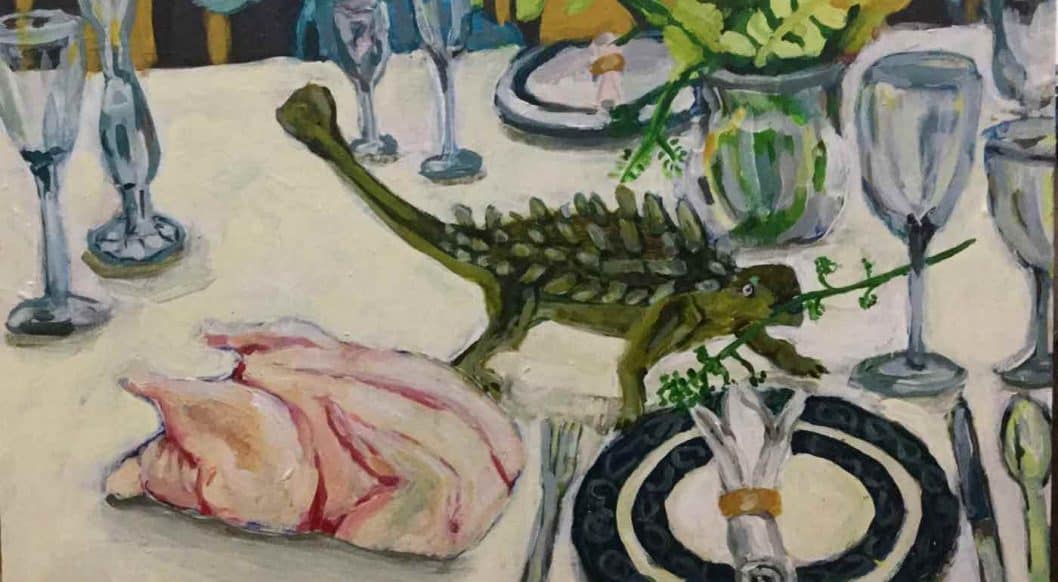 Q+Art: Artist Tommy Mavra Imagines What the World Would Look Like Without Humans

For generations, Tommy Mavra’s ancestral family relied on fishing and farming to make ends meet. While his parents stepped into more traditional careers, the first-generation American nevertheless developed a deep appreciation for the inherent balance between organisms and their ecosystems.

In his work, Mavra investigates how humans fit into that balance by reassessing our ever-evolving survival strategies. “Technology, medicine, housing, farming…are thought of as being artificial, yet they support the survival of our species,” he writes in his artist statement. “No other animal has had the same impact on the ecosystem that we do. In the long term, it seems that our inventions, intended to ensure our success, could usher in the end of most life on Earth.”

Despite his doomsday predictions, Mavra injects a healthy dose of humor into each painting. While humans remain mysteriously absent from his post-apocalyptic backdrops, possums, rats, and birds thrive on old french fries and abandoned dinner-party fare. Curious critters and slithering vines subsume all but small traces of human life, interrupting the order of everyday activities. “I focus on narratives of daily life — our everyday interactions with animals, the food we eat, and the things we buy,” Mavra notes. “I dramatize these ordinary moments to encourage an investigation of our expectations and assumptions.”

Mavra’s work takes on a special significance in the wake of the coronavirus pandemic. Early in 2020, during initial lockdowns, black bears were seen wandering through empty campgrounds in California. All over the world, animals emerged from their shrinking habitats to snuffle for food and explore their strange new freedoms. To humans, the empty city streets and abandoned shops looked downright apocalyptic. Mavra gleefully points out that the bears, boars, and cougars probably saw things in an entirely different light.

Tommy Mavra discusses the magic of poetry, getting out of a creative rut, and rethinking our city-centric art markets.

Tommy Mavra: I don’t think there are any specific books that belong on every artist’s shelf. It depends on the person and where they’re at in their life. But I do think that every artist’s bookshelf should have plenty of stories and at least some poetry. That’s where the magic is.

TM: That we aren’t alone on this planet. It’s important to remind people, and myself, that everything is interconnected. When viewed through that lens, we can then consider our place in the world rather than just in our societies.

But that’s just part of it. The other part of the answer would be: I don’t know. If I could fully say with words what I’m trying to express with art, I wouldn’t need the art. It’s good to have some mystery…some room for discovery. I approach every project with some sense of not knowing.

Do you prefer New York- or Chicago-style pizza?

TM: New York. But I’m biased, because I was born and lived much of my life in NY. I’ve been to Chicago—there’s great food in Chicago—the pizza is good. I’ve had all kinds of really good pizza. But no matter how good it is, it’s nearly impossible to compete with nostalgia.

TM: If I was specifically asked to work for free, I would say no. But, if I were asked to donate my time or art as a tax deductible charitable contribution, I would certainly consider it. I’m also OK with trading and bartering.

TM: No one person has influenced my work more than others. But I am influenced a lot by places and the people and cultures associated with those places. I’ve moved around a lot, and I connect with some places a lot more than others. Memphis and that part of the South, Budapest, The Balkans, and parts of NYC are often on my mind. As is Philadelphia, where I moved to in September 2020.

TM: Figuring my way out of a two-year rut by learning to trust my instincts. For a bit over two years, everything I tried in the studio ended up in the trash. I was too in my head. I felt myself drifting further and further from being an artist. It was depressing. I got to a point where I knew I wasn’t going to be able to think my way out the problem I was having.

So I went and got some big pieces of paper and started on four paintings. I painted what I wanted to and never stopped to think about why I was painting these images. I got really into it and liked what I was making. As I was finishing up those paintings, I got a call from someone I had met once, asking me if I had any art to show. I sent him pictures of what I was doing and ended up in this big, fun group show. I’ve been trucking ever since.

TM: To be careful not to put my story in someone else’s language. That artists should create their own language based on their own history.

TM: For me, it was. Especially the BFA. I didn’t grow up around art; I didn’t go to an art museum until I was 18. I always wanted to draw and make stuff, but I didn’t have much access. I loved looking at cartoons, comic books, graffiti, movie posters, album covers. These were the first types of art to inspire me. but I didn’t really have access to a community of artists until I went to college.

TM: I would like us to stop saying that places are the center of the art world. We can say New York City is the global center for the art market because the big auction houses are there. But there are great artists everywhere. Saying NYC is the center of the art world sends out the message that if you live elsewhere you’re less important. And art is too great, too complex to define. How can we determine the center of something we don’t even fully understand? And how can it all be represented in one small space like New York City? A decentralized art world would benefit artists by providing multiple paths going in multiple directions and would take away some power from the big institutions.

TM: Artists preserve history in a very honest way. Even when the artist was working for some sort of weird king or whatever, they would find a way to give us a glimpse into their reality. Without artists, history would be much more perverted. So to be historically significant means that you succeeded in communicating something honest or significant about life. It would be great to make such a contribution to the future. But, I also need to earn a living…I would rather live in a world where those weren’t the only two options.

TM: I’ve been very productive in the studio. I was immediately laid off from my jobs so I just focused on my studio projects. Some of the teaching artist work I do came back, but it has all been remote. My studio is in my house so I’ve had access to it throughout the pandemic.

TM: I’m in the middle of a series of graphite drawings. The drawings are a look at the idea of morality. Each drawing focuses on a specific species of animal doing something people may consider moral or immoral. For example, vampire bats are expected to regurgitate some blood for the bats that didn’t go hunt that night. If they don’t, they can be kicked out of the cave. It’s a way to reflect on ourselves as a species. The series came about after I wrote a really short story about war and justifying murder. I want to put it all together as a book once I’m finished.