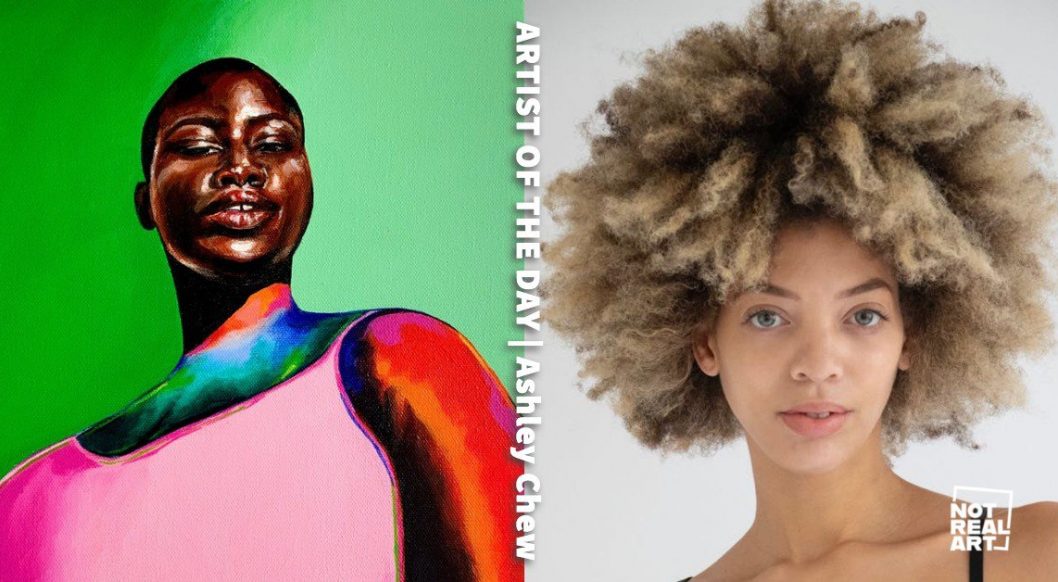 In 2015, Brooklyn-based artist and culture writer Ashley Chew painted ‘Black Models Matter’ onto a handbag. Her hashtag went viral during New York Fashion Week and was supported by Zac Posen, Iman, Bethann Hardison, and many others. At the time, runways and advertisements featured less than 10% people of color. As a result of her activism and the ensuing movement, they are now over 43%.

Chew was named one of ‘26 To Watch Under 26’ by Pattern Magazine and selected as an ‘Artist of the Week’ by Milk Studios. She has written on diversity and inclusivity for Vogue, Harpers, and Cosmopolitan, served as a panelist for the New York Times, and participated in artist residencies in London, South Africa, Indianapolis, and New York. Rather than focusing on images of ‘black trauma’ depicted in the news, Chew paints resonant portraits of artists and activists that pay tribute to the ‘resilience, rest, regality, and visibility of marginalized groups.’

As an advocate for social change, Chew longs for the day when her work will be considered on its own merits instead of being featured at specific times of year. She doesn’t object to being highlighted during Black History Month, or featured in BIPOC exhibitions, but questions this targeted approach.

As a BIPOC Artist you have to create your own niche, literally. There's time when your work is "too black", "too feminine," "too sensitive". So you just paint. I am all of those things, why does my work only have to go into a "Black" show, why does my work only have to go to a "Woman's" show. Why can't BIPOC Art just hang among everyone else's Art and just be? For example. Some months are slow but when Black History Month rolls around every February then I get calls and emails. Why is that? Why can't our work be celebrated year round? Although I am grateful to be highlighted during that time, we must go beyond performative Activism and support.

Chew’s interdisciplinary projects address the sobering fact that only 4% of galleries, museums, and art fairs worldwide contain work by Black Women. Her work presents a call for action to members of the creative sector and beyond, and is a painful acknowledgement that there are still countless battles to be won.

Ashley Chew is an Artist, Activist & Culture writer based in New York, NY. Chew's paintings focuses on the resilience, rest, regality and visibility of marginalized groups. This is a direct contrast of the trauma depicted across mass media.

Milk previously named Chew “Artist of The Week”. PATTERN Magazine listed her one of “The 26 To Watch Under 26”. Chew has completed Artist Residencies at Driftwood Studios in East London, South Africa, and The Madame Walker Theatre in Indianapolis, IN.

Chew has written on Diversity and Inclusion for Vogue, Harper’s Bazaar, and Cosmopolitan. She has also been a panelist for The New York Times, Columbia University.

Chew is an Artist-In-Residence at Stonehenge NYC located in New York, NY.

Ashley on the Web And Social Media

Here’s where to find out more about Ashley Chew on the web and social media: