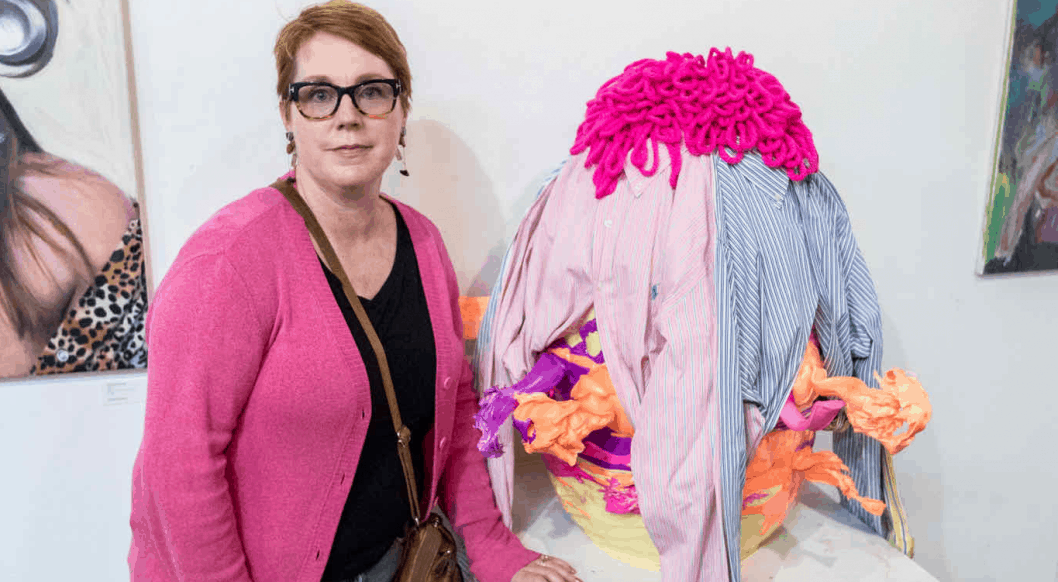 Beth Abaravich has a professional statement which reads, “I am a working artist focused on bridging fashion and sculpture.” If that creative process doesn’t keep her busy enough, she also recently got a new dog, a Pharaoh Hound that she is acclimating to its new surroundings. When asked if she thought new dog moms should be granted maternity leave, an easy, knowing laugh escapes.

“The best thing about being an artist is having a voice that is completely unique.”

“I’m just so off the wall and different.”

Abaravich is originally from the suburbs of Kansas City, Missouri. After she left there to study at the Art Institute of Chicago, she returned home to a different experience. “I came back to Kansas City and it was kind of cool being back, but then at the same time, I just realized that it just didn't resonate with me…because I'm just so off the wall and so different.”

Beth Abaravich moved to Los Angeles and entered into the Fashion Design Program at Otis. “I worked as a fashion designer for a while and I was Bob Mackey's assistant for almost three years.” Abaravich reflects on having to choose between working for a popular retail store and going to work for Bob Mackie. “[The] experience of seeing a different world, the creative process, and what it takes to do costuming – it was just amazing! Also, I grew up on the Cher show.”

In addition to earning a Bachelor’s in Art from the School of the Art Institute of Chicago and in Fashion Design from Otis College of Art and Design, in 2018, Abaravich received an MFA from Art Center College of Design in Pasadena. She was also an art instructor at Otis, FIDM, and Art Center. Sometime during all this, she also worked as a stay-at-home mom. “It’s funny. I think in terms of fashion. Like when my son is playing baseball, it’s hard for me to call it a uniform. It’s a costume.”

When asked about the moment she found out she was a Not Real Art grant recipient, she shared, “I was excited. The irony is, I looked at the parameters for the grant and I felt like I don't have enough of ‘the other,’ to really qualify. And then I thought – I'm just going to apply and be totally honest about how I feel about being a woman [and] how the gallery system is stacked against certain elements. It obviously resonated with them and so I was really pleased.”

Beth Abaravich On Her Process

“The way I work is extremely influenced by fashion and the fabric that makes it – and just the history embedded in clothing…the embedded meanings.

“I just think about turning things on their head, having fun with it, engaging the public. I have pieces that are very straightforward. One of my more recent pieces is this big ruffled piece and then I made a big belt that’s cinching it, versus sometimes, I make really abstract things [that] people have to think about a little bit more.”

“Sometimes it's hard to get momentum. I definitely think there's ageism in almost every industry, whether they like to admit it or not. There are certain biases. People can support a painter because people are looking at it in a certain way. They'll say, “Hey, I really liked this, and I can put it on the wall.” When you're working in three dimensional, it's like, “I really like this but I don't know if I want to show it.” That kind of thing. I think that's really the toughest part – to find your people.”

Beth Abaravich talks about the subtle and not-so-subtle sexist codes in our society and how we’re not always aware of them. “It’s like when women say things like, “this isn’t bad feminist; it’s good feminist.” Recently, she overheard some young men putting down a movie because the films featured all-female leads.

“A pretty, but surreal world underneath this constrained, masculine world.”

“I'm working on this one piece right now where it's this hourglass in the round. I've made these resin pieces that kind of protrude off that, kind of like penises, but they're really brightly colored and abstract. But then I'm going to take khakis from the thrift store and I'm going to unzip the zippers and have it go all the way around the bottom. Then I'm going to have Polo Oxford clubs all over the top. So it's kind of like this pretty, but surreal world underneath this constrained masculine world.”

Regarding the critical voice and the role it plays in her artistic process, Abaravich offers this, “The critical voice – that's what the MFA gave me. It's a deeper understanding of why I make things and what I'm going for. So when I am working, I can be self-critical instead of waiting for somebody else to do that, you know? Because that's where it gets really painful. But I'm more design-oriented. So the critical part was really important for me to understand that just because it's pretty, doesn't mean it’s saying something.”

Beth Abaravich thought of herself as more faculty than artist until she was working on her thesis show and in the middle of it, realized she could be an artist. “I guess I put artists on a pedestal in a way, and then I just went through this transformative thing where I was working so hard and I was thinking so hard about things and reworking them, and I just thought, wow – this feels so good!”

Her only regrets about living the artist’s life is that that she wishes she would have become an artist sooner. “I probably have about 20 years, if I'm lucky, to really get work done! Because you don’t know when you’re going to die.” With that same easy laugh she adds that it’s really important to live in the moment.

Beth Abaravich On The Best Thing About Being an Artist

“I think the best thing is having a voice that is completely unique. You can fine tune it and you shouldn't be like anybody else. Being an individual is supreme, you know? That's what I love about being an artist.”