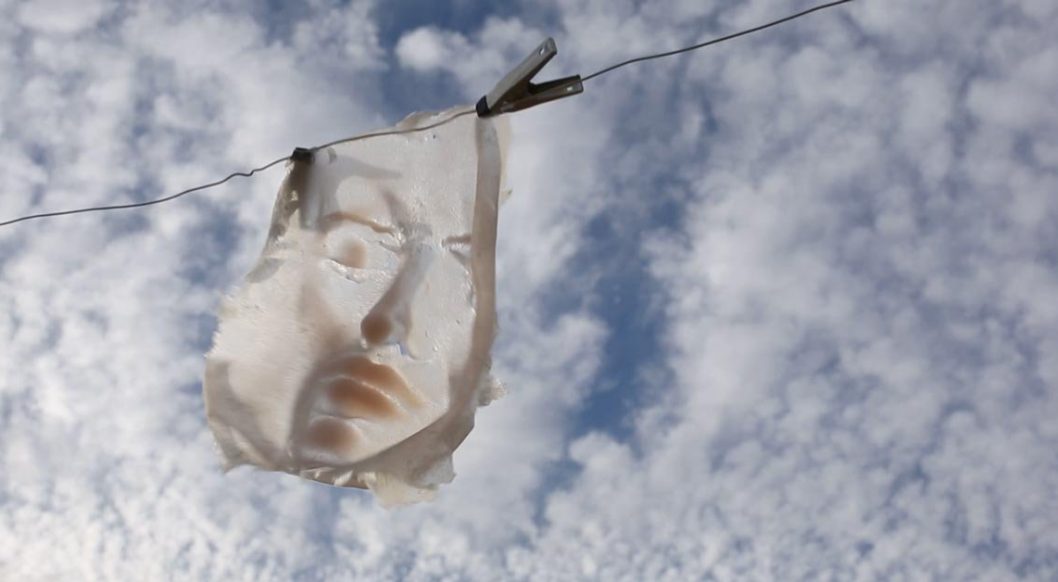 “What is a woman?” Perhaps you’ve heard this question pinging around the darkest corners of the internet in recent years. Asked in bad faith by conservative commentators, the question ignores that the term “woman” has never had a single, fixed meaning, and that trans people have always existed.

Asked in good faith, “What is a woman?” results in nuanced, thought-provoking work from artists like Brian Oldham. A self-taught photographer since his teens, the California-based artist first captured the world’s attention with dreamy portraits that questioned social expectations of masculinity. A decade later, Brian supplements his surreal photography with sculpture and film in changing faces with the certainty of a brand new god, a recent series of hybrid works that “explore caricatures of popular American ideals” through self-portraiture.

Haunted by American ideals of femininity, changing faces with the certainty of a brand new god asks what it takes to “pass” for a woman in contemporary culture by recontextualizing the binary between a multitude of different female archetypes. “Transforming myself into mannequins of modern womanhood, I perform shifting states of self,” Brian writes in his artist statement. “[I create] masks of my own face—easily modified, stretched, painted, and reformed—to be worn.”

Alongside the blonde locks and mousy pigtails, double-d silicone breasts gleam under a string of pearls. Smudged with red lipstick and blue eyeshadow, the peel-off mask in “Another Skin” looks eerily transferable, like morning-after makeup stains on a pillow. “The optics of identity are challenged through my explicit abandonment of a cohesive gender ego in my search for the parameters of fluidity and validity,” Brian says. The changeable nature of identity shines through most clearly in his silicone masks, which often appear frayed at the edges, as if waiting for someone to slip them on and embody any number of new identities.

Brian Oldham discusses his next self-portrait, the idea of striving for hyper-feminine ideals, and his growing collection of vintage gay literature.

For your ongoing project, changing faces with the certainty of a brand new god, you portray “caricatures of popular American ideals”—can you elaborate on that?

Brian Oldham: I started with the work really interested in mimicking popularized standards for women’s beauty from recent decades. I set out to transform myself into characters with traits and style that had been widely accepted as the ideal female forms, in a kind of personal performance of the limits of my own ability to be accepted as such and pass. The work asks what a woman is and what a woman can be from the perspective of the culture and the women it idolizes. It can feel comfortable but facile to strive for these kinds of hyper-feminine or masculine forms as a mode of gaining validity as a trans person in the eyes of the culture, and this was kind of a performance of that yearning I identified in myself.

Where do you see this series going? Any ideas for your next self-portrait?

BO: I didn’t originally intend for the series to manifest as it has, with the inclusion of the self sculptural forms. As I was working on becoming and capturing these caricatures of femininity, I wanted to acknowledge to the viewer the irony within the project, and photographing the masks of myself to present alongside the self-portraits grew into the most natural way to do that. I want to push to explore more extreme transformations and further integrate some of those self-questioning threads. I think my next portrait might be as a really tan, bodybuilder-type woman.

Walk us through your creative process. Where/when do you get your best ideas? How long does it take you to complete a new piece?

BO: Most of the time I’m working from a conceptual perspective, with a specific goal or intention in mind before I begin work on something. I’m more comfortable as a planner. To me, the feeling of being ready to start a project can be equated to the motion an archer would take to draw a bow before firing. It feels a lot like that—a buildup of tension in ruminating about an idea before I’m ready to release my hold on it and bring it into a physical form. As far as the initial ideas go, they usually come out of nowhere, when I’m not thinking much at all—say, on a long drive. But from idea to final piece, I’d say it usually takes me a month or so to finalize something.

You use many different mediums for your projects—sculpture, film, photography, poetry. Is there a medium that resonates with you more than others?

BO: I most often gravitate towards photography: it’s how I started and how I feel most comfortable. I also enjoy the performative aspect of it—in acting out a scene or building something to be photographed. Even when it’s something staged (which it usually is for me), I enjoy the feeling of making it real for at least a few moments. It feels special when you can manifest an idea into a physical reality.

What books, music, or films inspire your work?

BO: I like “You can’t do everything, but you can do something.” It was a note I found taped to my grandmother’s fridge that she left for herself.

BO: Probably not enough. I know staying active and working out helps me feel good, but I’m bad at keeping myself motivated to do it!

BO: I’ve recently started work on a new project I’m excited about that’s based around themes drawn from my experiences growing up gay in the catholic church. I’m almost finished with a sculpture based on my conflation of sexuality with religious morality that I’m pleased with.