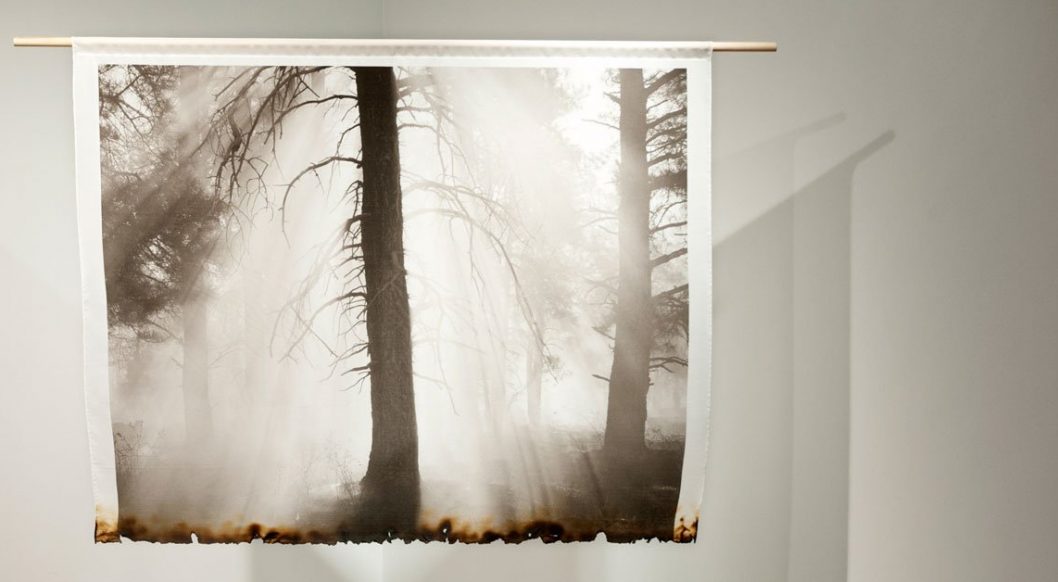 Bryan David Griffith gave up a successful consulting business and lived a nomadic lifestyle, camping out of an old van. When his vehicle broke down in Flagstaff, Arizona, he decided to call it home. His mixed-media pieces from tree trunks, beeswax, photographs, and charred lumber explore the devastating effects of wildfires, and the fraught relationship between man and nature. A recent project explores the cyclic nature of forest fires and the multi-faceted reasons behind their proliferation.

Griffith’s creative journey began when he was studying engineering at the University of Michigan. Stumbling upon a ‘dog-eared’ photo manual inspired him to build a makeshift darkroom. After earning a degree, he became troubled by the environmental impact of his clients and decided to pursue art full time. In 2014, the Slide Fire threatened his Arizona studio. Griffith was invited to study wildfires with a group of scientists. Working on the collaborative project, Fires of Change, prompted him to focus on ecological concerns and examine the results of overdevelopment and inadequate forest management.

My work explores environmental and climate issues which affect us all as citizens of this shared planet. The interrupted forms of my work deliberately compel the viewer’s eye to complete them. I try to create a charged atmosphere where viewers can spark their own discoveries, sometimes different than my own. My goal as an artist is to provoke questions; finding solutions to difficult problems is work we must all forge together……I use inexpensive and natural materials in my work: salvaged wood, fallen leaves, charcoal from fire sites, petroleum, dyes prepared from plants and minerals foraged near my home.

With no formal arts training beyond high school, Griffith found it difficult to be taken seriously. But his lack of credentials kept him from going into teaching, and allowed him to concentrate on his work. His mixed-media installations have been criticized for their ‘simplicity.’ Griffith welcomes the idea that his work looks effortless and considers it a sign of success. After years of hustling for exhibition opportunities, he feels lucky to be able to support himself, and create work that ‘wakes him up in the middle of the night and demands to be made.’

In Western culture we traditionally view dualities—light and darkness, life and death, forest and fire—as opposing forces in an epic struggle of good vs. evil. We see ourselves as fighting to preserve life and subdue death by taming nature to prevent unpredictable disasters like wildfire.

My work explores the idea that these forces aren’t opposed, but rather part of the same continuous cycle. One can’t exist without the other. For thousands of years prior to settlement, low to medium-intensity fires burned frequently in many Western forests. Many native species are adapted to depend on fire or the diversity of habitat it creates. But as a result of past logging followed by decades of fire suppression, today’s forests are younger, denser, more homogenous, and less drought-resistant than old-growth forests. This forest structure combined with accumulated needles and branches on the ground provides fuel for unnaturally large, hot, ecosystem-destroying fires to develop during periods of extreme weather. By trying to prevent death, we have inadvertently severed the cycle of life.

Now wildfire is coming back with a vengeance, like a river breeching a dam. And these unnaturally destructive fires are getting more frequent with climate change: today the average fire season is 78 days longer than in the 1970s. At the same time, development has expanded dramatically in fire-prone areas, making management more difficult, ignitions more likely, and fires more dangerous and expensive to fight. I investigate these concepts by using fire itself as my medium alongside other primal materials like wood and beeswax. I juxtapose soft organic lines and natural edges with geometric forms that convey our desire to control capricious natural processes—often with unintended consequences.

Bryan David Griffith’s work spans multiple media, using simple tools and materials in unexpected ways to explore ecological issues. Griffith’s unconventional career began when he stumbled upon an abandoned, dog-eared photo manual and built a makeshift darkroom while studying engineering at the University of Michigan. After graduation he built a successful business career with an international management consulting firm, but found his job unfulfilling and was troubled by the environmental impact of his clients. He ultimately resigned to follow his conscience. In order to pursue art fulltime, he adopted a simple nomadic life, camping out of an old van and saving every dime for gas and supplies. When Griffith’s van broke down in Flagstaff, Arizona, he fell in love with the mountain town—and then his wife, Tasha—and has called it home ever since.

In 2014, after the Slide Fire threatened his studio, Griffith was invited to study wildfire with scientists and develop new work for the group project Fires of Change. He set his camera aside and used fire and natural materials to create visceral, experimental work. Griffith's work for the project earned the Flagstaff Arts Council's 2016 Viola Award for outstanding achievement and community impact in the visual arts, along with a 2016 Contemporary Forum Artist Grant from the Phoenix Art Museum. These awards helped him develop the work further into solo exhibitions at the Mesa Contemporary Art Museum, named one of Metro Phoenix's top-10 art events of 2017 by the Phoenix New Times, and the Fresno Art Museum, named one of the Central Valley’s top-20 cultural events of 2019 by the Munro Review.

Bryan David Griffith on the Web And Social Media

Here’s where to find out more about Bryan David Griffith on the web and social media: