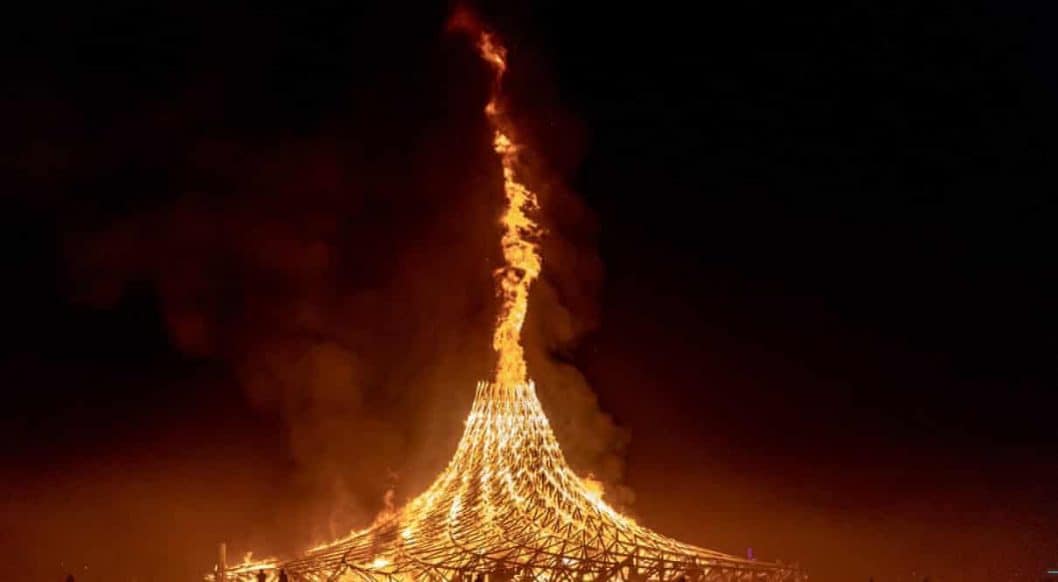 Burning Man 2020: Something strange is happening in the Nevada desert this year.

Even the billionaire tech moguls, who are known to show up with personal chefs via helicopter, are sitting this one out; they’re resigned to virtual attendance during the coronavirus pandemic like everyone else. This year it's not the human petting zoos, fire-breathing dragons, or voluntary dust baths that seem strange—it’s their absence that startles.

This year it's not the human petting zoos, fire-breathing dragons, or voluntary dust baths that seem strange—it’s their absence that startles.

Not to fear. Would-be burners have two pandemic-approved options this year: pop on a virtual-reality headset and visit the temple from the safety of your couch; or head over to Amazon and rent the recently released Burning Man: Art on Fire.

The 90-minute documentary, from director Gerald Fox, shows how organizers create the temporary city, seemingly out of nothing, a mere 18 days before partygoers show up. The film was shot in 2018, shortly after the death of Burning Man’s founder, Larry Harvey. The proximity of his death brings a sense of urgency to the film, one that’s bolstered by poignant and sometimes whimsical interviews with the artists at the center of the documentary. (Make sure you catch Scottish artist Andrew “Haggis” Johnstone bagpiping his way through the film .)

Burning Man has cultivated a titillating reputation over the years, but it’s Fox’s focus on the handful of artists who install their large-scale works in the Nevada badlands that anchors the film’s narrative. Expect to see more hardhats and dust-catching handkerchiefs than tutus and headdresses here. London-based French architect Arthur Mamou-Mani is tasked with building the Galaxia Temple, where burners will later gather to reflect, grieve, or leave an offering. Mamou-Mani joins them at one point, marrying his longtime partner in the Temple.

Art On Fire is a jaw-dropping spectacle that will put ants in your favorite pandemic sweatpants.

The film offers little in the way of context or history, and relies instead on impressive aerial shots of spiraling wooden structures and colorful ashtray sculptures erected amid a vast, punishing terrain. All before 80,000 burners show up with glow sticks, baby wipes, and feathers. Lots and lots of feathers.

Toward the end of Art on Fire, we’re treated to a glimpse of burners in action. The sun goes down in the desert and the torches come out. Shot from above, it’s a jaw-dropping spectacle that will put ants in your favorite pandemic sweatpants.

Organizers and burners alike know they can’t fully replicate the communal, tactile experience of Black Rock City in 2020. Streaming the event seems the safest option for the time being, even though, to many, physical distance flies in the face of Burning Man’s get-your-hands-dirty philosophy. For others, Art on Fire will serve as a welcome blaze of inspiration in dark times.