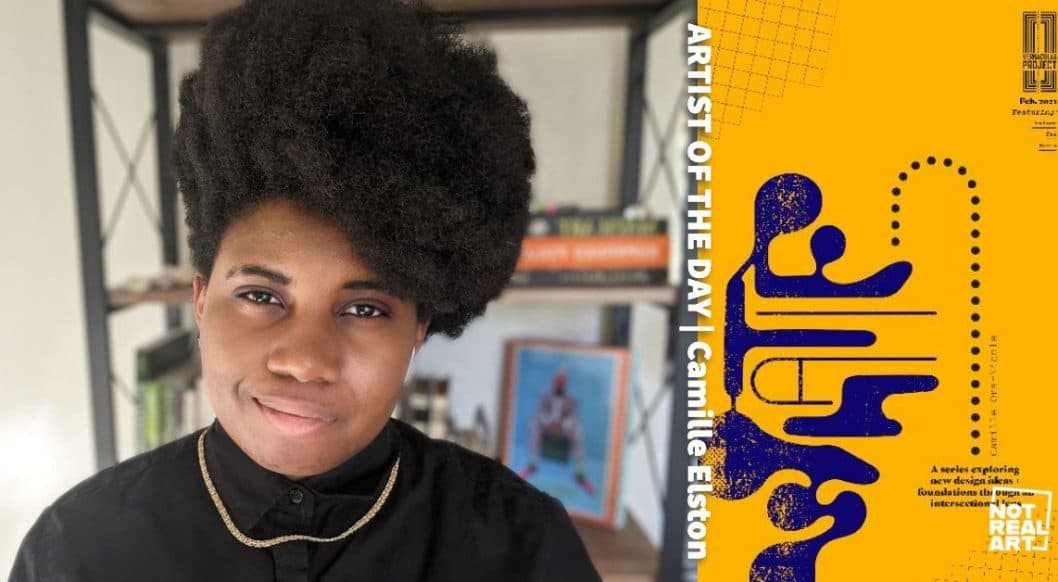 What If? – Camille Elston Promotes Diversity in the Built Environment

Camille Ora-Nicole Elston is an award-winning artist from Los Angeles whose pen and ink drawings, illustrations, renderings, and zines pose the question: What would we have built? Her goal is to make the environment a more equitable space by “highlighting a Black vernacular and creating opportunities for black folx to better define the spaces they live in.”

After initially studying architecture, Elston changed direction and earned a Bachelor’s Degree in Graphic Design with a minor in Art History from Cal Poly, Pomona. She followed up with a Masters degree in Heritage Conservation from USC. Her zine “What If?” won an A+D Museum Design Award, and highlights the lack of diversity in urban planning and its consequences on people of color.

Whenever we did our own towns or tried to expand our communities, they were often burned down, buried, or economically shunned. When projects were built primarily housing poor Black people, their input was not something that was included in the plans.

Elston creates “new models of environmental aesthetics that will be developed by those it affects the most.” Her multi-media work, The Vernacular Project, includes a map for creating ideal communities, and introduces younger audiences to new ways of art making. The project investigates how future African-American communities will be designed and encourages participants to take an active role in reshaping and redefining their environments.

Despite her creative credentials, Elston often felt alienated in the world of museums and academia. She found their access limited when it comes to people of color. A bipolar disorder temporarily derailed her studies, but she persevered and found her own footing. In graduate school, she formed a blog that evolved into the online magazine, Q26, highlighting queer artists and media makers, particularly those of color. By combining her background in art theory and history, with an interest in architecture, and her design and writing skills, Elston has created a diverse platform to challenge racial inequities in urban environments. She hopes to affect change by inspiring others to imagine “What If?”

My work is a series of pen and ink drawing, vector illustrations, renderings, and zines that explore the status quo of our environments and poses the question: What would we have built? As Black people, we have had little opportunity to impact how the world around us in the United States is shaped. Whenever we did our own towns or try to expand our communities, they were often burned down, buried, or economically shunned. When projects were built primarily housing poor Black people, their input was not something that was included in the plans. When middle class Black people were able to find a place to call home, it was in neighborhoods that were already built – and often experienced white flight as soon as the cities became “too black” also resulting in less economic support to change what was already there.

As a result, our environments were and still are dictated by the ruling class, with little regard to what we need or desire as integral to our culture, traditions, and moral standards. To add insult to injury, subjects like planning, architecture and design, and fine arts are often not geared toward Black kids.

This work takes the ivory tower out of the process of creating new environments and creates the opportunity to define a Black vernacular in the built environment. It redefines aspects of design and art theory and expresses new concepts through art and creative writing more so than through unnecessarily academic terminologies. My work inspires Black people to take a good look at where they are, imagine what it could be, and take the first steps towards change. It also creates the opportunity for everyone to look at what the system at hand has wrought and pushes them to understand that universalism is a lie.

This first zine won the A+D "On the Desk" Design Awards 2020, and includes earlier pen and ink drawings imagining one possible evolution of the shotgun house. It is available at www.vernacularproject.com.

This is the second in the series of zines, exploring the concept of texture.

Look Mom, No Windows! started out as an experiment looking at tiny houses surrounded by pools of water. It then evolved into a public park including a semi-functional sculpture garden complete with several pools and spaces to have picnics or other gatherings.

Yarn Hill was an installation meant to bring the comfort of interior, traditional work to the outdoors. Throughout the day, people were able to lounge in the shade on comfortable pillows covered with large, brightly colored crocheted blankets. Completed in partnership with Ashley Fitzgerald.

Constellation is the starting map of the vernacular project, and provides the blank canvas for towns, illustrations, and renderings highlighting the Black vernacular. More information can be found at www.vernacularproject.com

Camille Ora-Nicole Elston is an Artist, Writer, and Heritage Specialist who encourages audiences to expand diversity in the conservation and design of the built environment. Through The Vernacular Project, Camille aims to make the built environment a more equitable space by highlighting a Black vernacular and creating opportunities for black folx to better define the spaces they live in. The goal is to set examples for diverse placemaking, equitable ways of living, and new “rules” for environmental aesthetics that will continue to be developed by those that it affects the most.

Camille received her BFA in Graphic Design and a minor in Art History from Cal PolyPomona, and received a Masters in Heritage Conservation from USC. Recent honors include the A+D Museum 2020 Design Award for “What If” Zine, a BoldPas Installation Show 2019 for Yarn Hill, and the Gamble House Scholar-In-Residence 2017/2018

Camille on the Web And Social Media

Here is where to find out more about Camille Elston on the web and social media: