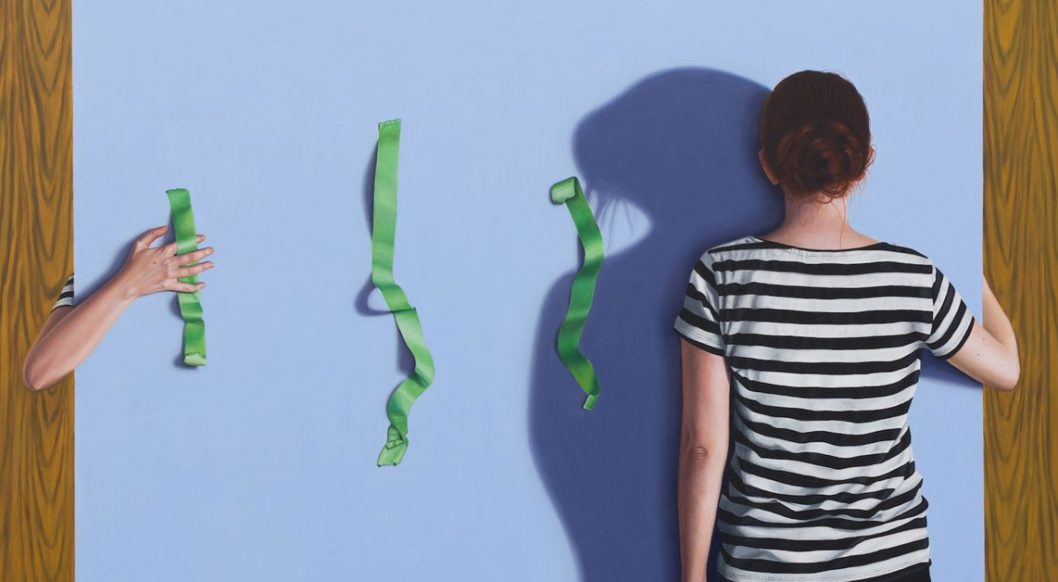 “The slippery boundary between the seen and unseen, known and unknown” lies at the heart of Cara Guri’s pensive figure paintings.

Based in Vancouver, Cara turns traditional portraiture on its head, commanding audience attention with mind-bending compositions and an airbrushed, hyper-realistic style. “I am interested in the balance between consumption and denial in painting: the information that is given to the viewer and that which is withheld,” she says. “Frequently using my own body as a reference, I explore self-image as an extended object, and how the tropes of historical portraiture define and negate identity.”

Cara denies access to her figures, concealing their eyes with braided hair, molded glass tumblers, and outstretched, objecting palms. Or she simply paints them from behind, teasing viewers with a partial view. She explains: “My paintings place a barrier between the viewer and the subject, questioning the role of portraiture and the conventional dynamics of the gaze.” The gap between Cara’s painstaking painting style and her refusal to provide emotional release creates tight-wire tension throughout each work.

In “Looking Glass” (above), Cara responds to Diego Velázquez’s “The Rokeby Venus,” swapping the Roman goddess of love for her mother, bobbed and blonde, face distorted by a tower of clear drinking glasses. “The distortions visible in my painting are quite literally the distortions I observed reflecting in the glass itself, and are not to idealize the figure or to make the mirror reflection more visible as in the ‘Venus effect’ device used in ‘The Rokeby Venus,’” she tells Vancouver culture magazine Scout.

Regularly used in film and art, the “Venus effect” describes a phenomenon in the psychology of perception. As in “The Rokeby Venus,” the standard scene shows a woman admiring her reflection in a mirror. As the viewer, we also admire her reflection. But if we see her mirror image from our vantage point, that suggests she’s looking at our reflection—not hers. Playing with perspective, relativity, and identity, Cara’s cryptic work questions what it means to see, and be seen.

“My paintings place a barrier between the viewer and the subject, questioning the role of portraiture and the conventional dynamics of the gaze.” — Cara Guri