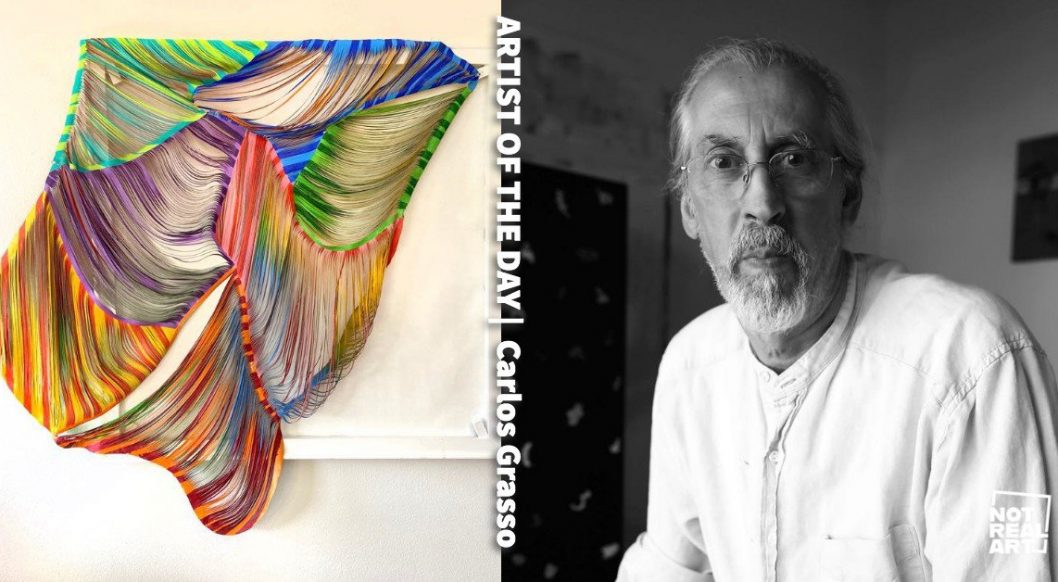 Carlos Grasso – Why an Artist from Argentina Tears the Canvas Apart

Carlos Grasso is known for his innovative ‘shredded’ painting series, “Canvas Deconstruction.” Originally from Argentina, Grasso started out in music before turning to visual art. His lyrical abstract reliefs, with their vivid colors and fluid compositions, are meant to reflect “the thorn and dismembering nature of our society in the last three decades.”

After growing up in Buenos Aires, Grasso performed as a musician in France and the U.S. He studied Old Masters painting techniques with the artist David Leffel, but was lured to abstraction. His studio in Ojai, California is filled with the “tools of an inquisitive mind.” Disembodied canvases, found objects, and oversized brushes enhance his expressionist explosions of color and form. Grasso’s goal is to create art that “reflects the best of us.”

I believe in a world (and art) that includes the "other," whatever form that "other" might take and whatever that "other" expresses. In fact, in that world, there are NO OTHERS, just brothers and sisters learning the human journey, being in art, social movements, politics, health issues, and most importantly the danger of upcoming threats to our species.

Grasso’s playful mixed-media works represents ideals of freedom and equality. By “liberating his pieces from the constraints of the frame” and devising his own experimental techniques, he’s a dynamic creative force. Describing himself as ‘somewhere in the middle’ between an emerging and established artist, Grasso hopes to inspire others working outside the conventions of the traditional art world. His improvisational approach, spiritual outlook, and musical roots, add a sense of movement and dance to his vibrant hand-cut canvases.

I usually greet collectors, curators and visitors to my studio with a “welcome to my playground!” My art requires the essential element of play, whether cutting and shredding painted canvas by hand, assembling found objects on textured panels or designing my own colorful modern mandalas on paper. The more I get out of my own way, the more creativity flows unobstructed and strangely enough, the more I control my medium.

My series "Canvas Deconstruction" intends to be an exploration of the canvas liberated from the boundaries of frames, flat surfaces and composition limitations. A sculptural, three dimensional, gravitational and textural approach to painting. Artists—in all branches and disciplines—are the preeminent voice of both the collective and the individual unconscious. Art brings to the surface, to our awareness, all the processes that run deep, embedded, and often silently ignored within. As the ancient philosopher once said, "the unexamined life is not worth living."

A cascading flame of colors.

The Canvas, free of its framed square limitations flows gravitationally with a life of its own.

The canvas which is a rectangle, once cut, takes a three-dimensionality of its own.

With a background of suffering, only a few colors can barely survive…

One side, torn up by division of ideologies… the other side unified by its universal ideals…

Carlos Grasso – A visual explorer artist. Born in Buenos Aires (Argentina). Lives and works in Ojai, California. Grasso is becoming more widely known these days for his innovative “shredded” painting series which he calls “Canvas Deconstruction.”A native Argentinian, Carlos never imagined he would spend more than 45 years abroad in France and the U.S. making art, gaining an American passport and three children, and all that after a promising professional career as a musician.

Over the last 35 years, not only has he transitioned from music to making art full time, he’s also shifted from representational works (which he studied with master David Leffel) to abstraction, mixed media, installations and conceptual art. In his studio in Ojai, California, one encounters a display of torn canvases, found objects and disproportionally big brushes – the tools of an inquisitive mind. With these, Carlos tells manifold stories and implements varied techniques.

Carlos Grasso on the Web And Social Media

Here is where to find out more about Carlos on the web and social media: