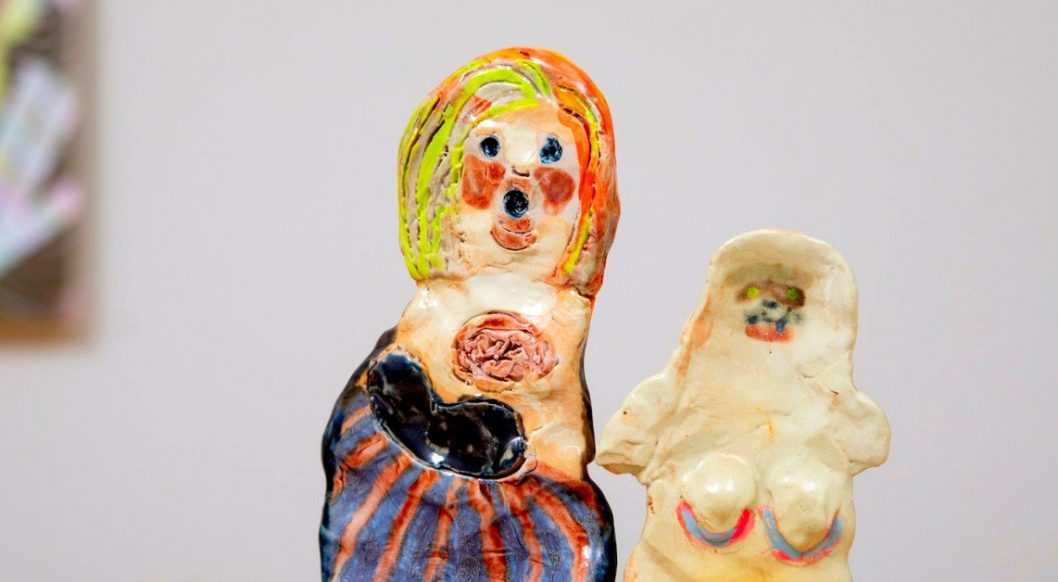 Celebrate Mother’s Day 2022 With 5 Artists Who Tackle the ‘Angst, Passion, and Pain of Womanhood and Motherhood’

The beginning of spring means Mother’s Day is just around the corner. (Psst! It’s Sunday, May 8). Motherhood has been a popular theme in art since the early ages, often appearing in Medieval paintings of The Madonna and her child. Today, many artists continue to explore the complex emotional threads that bind mother and child together.

Though we don’t need a holiday to celebrate the moms in our life, the special day is a chance to reflect on the many shoes she fills. In celebration of Mother’s Day 2022, NOT REAL ART has curated a collection of work from artists who tackle the “angst, passion, and pain of womanhood and motherhood.” Scroll through for blobby pink sculptures from Janet Currier, reflective mixed-media works from Liz Maugans, and fiery flashe paintings from Nicole Kutz.

Celebrate Mother’s Day with contemporary artists who explore themes of motherhood and womanhood.

Alexandra Carter grew up on one of the many cranberry bogs scattered across southeast Massachusetts. For Carter, the tart superfruit became a personal symbol, capable of illustrating her complex relationship with gendered expectations, both ancient and modern. Now based in Santa Diego, the mixed-media artist explores the many facets of female identity with explosive ink paintings that run the gamut from delectable to disgusting.

Peer closely into Carter’s work, and you’ll see her favorite fruit pop up in unexpected places. “The berry is a repeated icon in my visual lexicon,” she writes in her artist statement. “The fruit is like a garnet ambrosia, an exalted potion that seeps through my paintings and intoxifies its subjects.” Botanical illustrations and ripe berries double as globular body parts that seem to burst from their human containers. Though her use of flowers and fruit symbolizes women as vessels of beauty and abundance, Carter isn’t afraid to paint her subjects in a less than flattering light. Her work tackles the “angst, passion, and pain of womanhood and motherhood” with a wanton disregard for our visual or emotional comfort.

St. Louis-based artist Amy Reidel is a ferocious new mother. Hunkered down in the conservative heartland, the multidisciplinary artist creates glittery paintings, drawings, and sculptures that belie the bloody and often brutal business of being a mother.

Reidel, a first-time progressive mother, turns the personal political by confronting the powerful forces pulling mother and child apart. Whether by government intervention, climate disaster, or devastating illness, the threat of separation looms large in her deceptively sparkly works. Reidel’s bruised, broken, and frightful female figures illuminate a truth rarely spoken but tacitly acknowledged by mothers and caregivers the world over: that true love is determined by a willingness to sacrifice—and that sacrifice comes with a steep cost.

Learn more about the artist: Artist Amy Reidel Confronts the Monster of Love with Glitter and Blood

Crammed sardine-style into a white cubby, Janet Currier’s pile of blobby sculptures capture the frailty of the human body as it copes with a restrictive identity. Working in paint, sculpture, and installation, the London-based artist explores an internal world filled with memories of motherhood, quiet anxiety, and the stresses of existing as a woman in an increasingly perilous world.

Pushback, Currier’s blobby installation from 2019, consists of 45 soft sculptures, hand stitched from fuzzy pink fabric and stuffed into a found shelving unit. Currier uses a fleshy pink color for much of her fiber work, carefully choosing slight variations of hue with plenty of brown undertones, instead of an artificial hot pink or trendy Millennial pink. Next to the cubby’s cold, clinical surface, Currier’s organic blobs look downright unnatural, conjuring images of an exhausted body in a sterile hospital. “The female and maternal body is never far away,” she writes in her artist statement. “Soft sculpture installations suggest flesh that is squashed and compressed … sometimes the shape of a body, or an imagined internal view is seen in the work. It is most often a body that is threatened or threatening, a body being probed or that is sick or leaking or somehow not quite able to contain itself.”

Learn more about the artist: Artist Janet Currier Captures the Unseen Labor of a Woman’s Love

There is very little guidance on how to catalog the ups and downs of a life well-lived, so Ohio-based artist and curator Liz Maugans created her own system. Preserved within the pages of a sketchbook, Maugan’s year-long project, Beautiful Mess, takes inventory of her last 30 years as an artist.

Spurred by the recent passing of her mother and older brother, Maugans’ Beautiful Mess grapples with mortality, memory, and the person-shaped hole love often leaves behind. “I'll never forget these wonderful people, without which my world would have been different,” Maugans writes in her artist statement for Beautiful Mess, confessing she lost a total of nine loved ones in the span of a year. “I'm a caretaker for their memories, and transmitting these remembrances has been of great importance at this time,” she continues.

It used to be a four-month period, starting in late summer and early autumn. Now wildfire season in California stretches into six, seven, even eight months of the year, leaving behind a noxious cocktail of toxic fumes, scorched earth, and apocalyptic dread.

Jogging through the sprawling, torturously-shaped city of LA, Nicole Kutz spied insatiable megafires everywhere. “While living in Los Angeles through 2020, I became particularly impacted by the wildfires as I watched the areas that had inspired my art succumb to disaster,” the painter writes in her artist statement. Though she’s escaped to Nashville, Kutz’s latest flashe paint series addresses the horror she felt as flames consumed the Californian landscape last year.

Visually tied by flashe paint, a luminous acrylic medium, Kutz’s series grapples with the relationship between women, fear, and our ecosystem, pointing out the feminine connotations of the phrase, “Mother Earth.” A devoted runner, Kutz developed the series’ concept while jogging through Georgia, processing what she’d seen in LA.