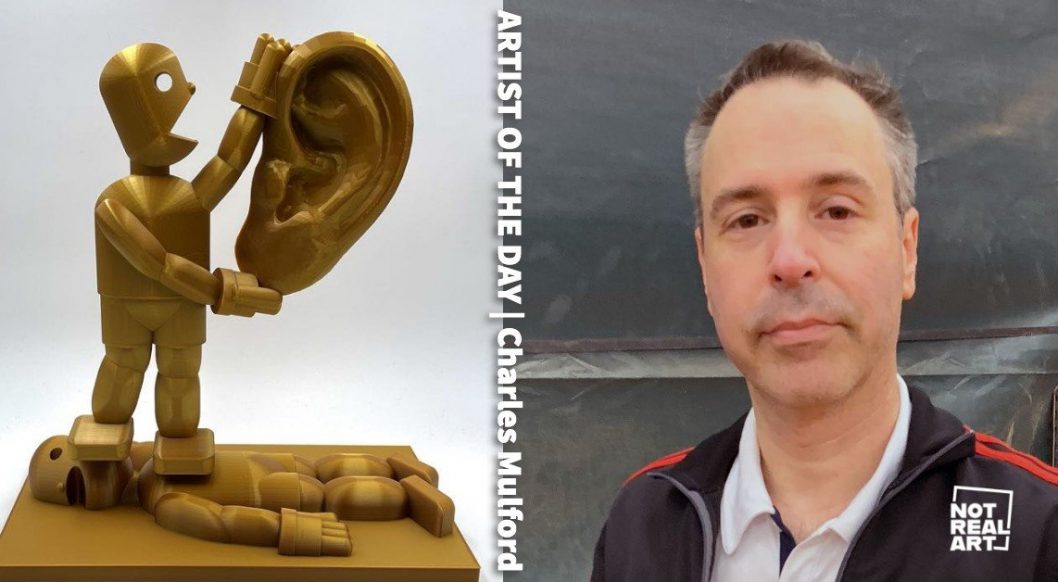 Charles Mulford discovered the joys of 3-D printing by accident. He was teaching his son how to use the printer during the pandemic, and discovered he could create his own imaginary world. After years of working with bronze, he found the immediacy captivating. His isolated computer-generated figures made from biodegradable plastic tell a ‘surrealist story in a comic book style.’

After earning a BFA at Rutgers University, and an MFA at the School of Visual Arts in New York, Mulford apprenticed at a bronze-casting foundry and became a master of metal chasing. But like thousands of artists who had their practices disrupted by COVID, he was soon wandering down unexpected avenues. Mulford’s robot-like figures have a futuristic irony that blends the familiar with the strange and borders on sci-fi.

A twist of the unreal is incorporated into these scenes. The work's cartoon quality allows for a lighthearted feel to serious subjects….The viewer can imagine what it would feel like if they were forced to sit alone in one room, not an unfamiliar experience during the pandemic. Using humor can be an effective tool to engage the viewer and encourage them to see a different perspective, one that they were previously unsympathetic towards.

Despite his proximity to the New York art world from his base in New Jersey, where he teaches art history to support his family, Mulford has grappled with the challenges of being a ‘reemerging’ artist. With galleries struggling to survive, and many of them geared towards younger artists, making an impact during the pandemic isn’t easy. His goal is to create larger-scale work. As the world inches back towards ‘normalcy,’ one can only imagine how stunning his solitary figures would be if they were exhibited life-size. With his wry cultural perspective, distinctive style, and contemporary mode of working, Mulford seems poised to take the next step.

Unexpected events during the pandemic lockdown led to my exploration of three-dimensional printing as a way to create sculpture. It all started while I was teaching my son how to use a 3D printer. I realized that computer modeling and 3D printing were tools capable of producing an imagined reality. My current body of work is a world of cartoon characters that tell a surrealist story in a comic book style. In lighthearted and sometimes humorous scenes, figures express their feeling about serious subjects. These works were drawn using a computer modeling program and then printed in PLA (a plant-based biodegradable plastic). The process starts as a three-dimensional drawing of an object that the program slices into layers. In an additive process, the printer extrudes thin layers of plastic, each of which is a cross section of the complete sculpture.

A figure, who after searching for a place to rest, finds a human foot that looks inviting. But the space inside the foot is too tight and they get stuck.

Two figures discover a human hand and decided that it would be large enough to share.

An elated figure poses with a captured human hand.

A figure sits alone slumped on his bed. His world reduced to only the things in this room.

They stole the ear together but fought over its possession. The winner holds up the ear in celebration.

Charles Mulford is a sculptor and art history professor who lives and works in New Jersey. He holds an M.F.A. from the School of Visual Arts and a B.F.A. from Rutgers University, Mason Gross School of the Arts. Mulford apprenticed at the Seward Johnston Atelier, one of the largest bronze casting foundries in the world where he specializing in metal chasing. His work has been exhibited nationally and internationally and is part of the special collection of the Vanderbilt University and Temple University libraries.

Charles Mulford on the Web And Social Media

Here’s where to find out more about Charles on the web and social media: