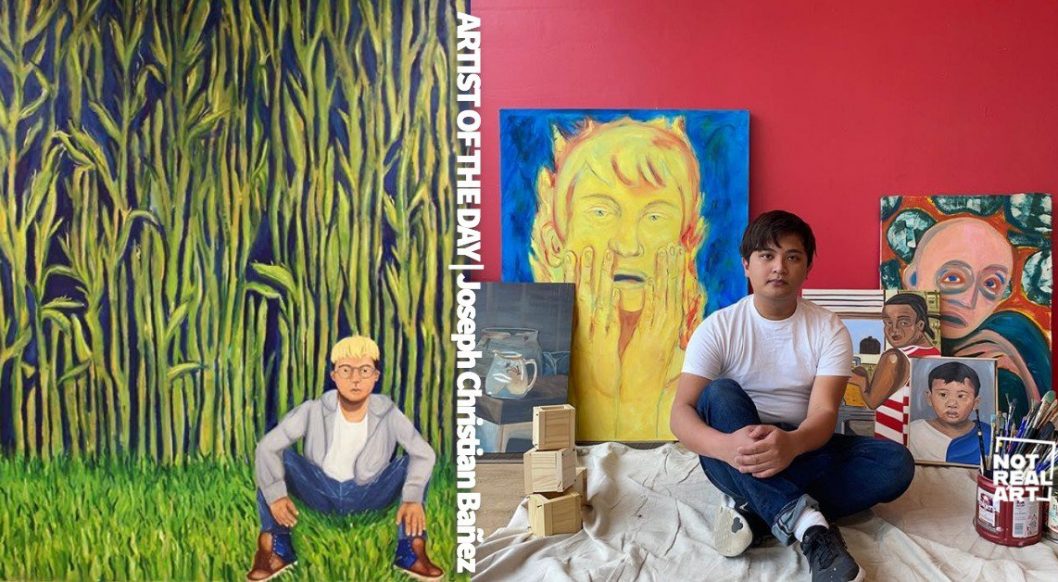 Christian Bañez was born in the Philippines and moved to the farmlands of Missouri as a child. In 2014, he enrolled at Truman University with his eye on medical school, but changed course and decided to pursue fine art. His narrative oil paintings describe the challenges he faced trying to blend into rural America. A self-portrait of his lone figure dwarfed by towering stalks of corn has a refreshing bluntness that’s mitigated by hope.

As a teenager, Bañez lived in constant fear of being outed for being gay, or undocumented, or both. He felt he needed to assimilate to survive. Achieving permanent residency status gave him the freedom to stop trying to please others and follow his dreams. He considers his work ‘an exercise of vulnerability’ that describes ‘raw moments’ in his life and showcases the xenophobia he and his family experienced when they arrived in the U.S. His depictions of the immigrant experience express a commitment to racial equality and a critique of the American Dream.

I believe my artwork to be democratic in nature in that it depicts a contemporary immigrant story through a multifaceted lens that doesn't fall into the idea of "American excellence." By creating work with this deeper understanding, I want to create better representation for Asian Americans, immigrants, and children in rural areas…Taking notes from traditional narrative paintings, I’ve inserted myself and my family into a variety of paintings that depict our experience with being people of color in a white environment, facing racism, and the racist standards that come with being a “model minority.”

Bañez gravitates towards artists from other underrepresented groups to build a support system and confirms he belongs in the field. Breaking expectations of ‘what an artist can be’ is a driving force. In 2021, while pursuing a BFA at Missouri Western University, Bañez participated in a summer residency program at the New York Academy of Arts. Considering the challenges he faced when he immigrated to the United States, and his ability to share them on canvas, it seems fitting that he is one of nine artists featured in the exhibition Liberty and Justice at the Charlotte Street Foundation in Kansas City, Missouri, which runs through October 23, 2021.

I share my vulnerability through my art as smoke signals to others that I am here, and they’re not alone.”

Throughout my childhood, I always felt on the outer limits in the spheres of my identity. Born in the Philippines and raised in rural Missouri, I had limited memories of my ancestral homeland and its culture. My small hometown was white and homogenous, I found myself continually at odds with it. My other spheres of identity as a closeted gay man, and being formerly undocumented further socially isolated me. I felt like I was continually trying to assimilate to survive, and constantly in fear of being outed for my sexuality and citizenship status. Now with time and being granted permanent residency, I share my experience through art to find others that feel this way. To create connections through familiarity, and finding what we all find in common and what differs.

In my studio practice, I am creating series of paintings depicting my life as a first- generation immigrant. Taking notes from traditional narrative paintings, I’ve inserted myself and my family into a variety of paintings that depict our experience with being people of color in a white environment, facing racism, and the racist standards that come with being a “model minority.” In October, I will be eligible to file for U.S. citizenship. With this in mind, I’ve been exploring through performance and installation art the history of Filipino Americans, the “American Dream,” and what does citizenship means to immigrants. In other parts of my practice, I take inspiration from the daily parts of my life where I create small drawings and sketches that depict modern-day moments: online dating, trying to plan coordinate schedules with friends, and seeing people interact in gatherings (cafes, airports, zoom rooms).

With a new political administration in power, and the recent news interests in DACA Dreamers. I find myself privileged that I could create art that depicts my own personal experience of being undocumented without the fear of being deported. With this privilege, it also comes with the social responsibility to shed light on this issue until a pathway to citizenship is realized.

Depicts Filipino female toddler with pajamas on top of her head riding a Chinese dragon and on fire.

Recreation of a photo of four Filipino children with derogatory slurs over their faces.

Christian Bañez was born in Cebu City, Philippines. In 2001, his family moved to the United States in rural Missouri surrounding long stretches of highway and acres of farming land. In the Fall of 2014, he enrolled at Truman State University in Kirksville, Missouri to pursue a Bachelor of Science degree in Health Science with the aspiration to go to medical school. In his final semester, his passion for painting and art was rekindled and he decided to pursue a career in art. Bañez is currently pursuing a Bachelor of Fine Arts degree in Studio Art-Painting with a minor in Art History at Missouri Western State University. His art explores modern conflicts in identity, self-vulnerability, and relishing the mundane moments of life.

Christian Bañez – on the Web And Social Media

Here’s where to find out more about Christian on the web and social media: