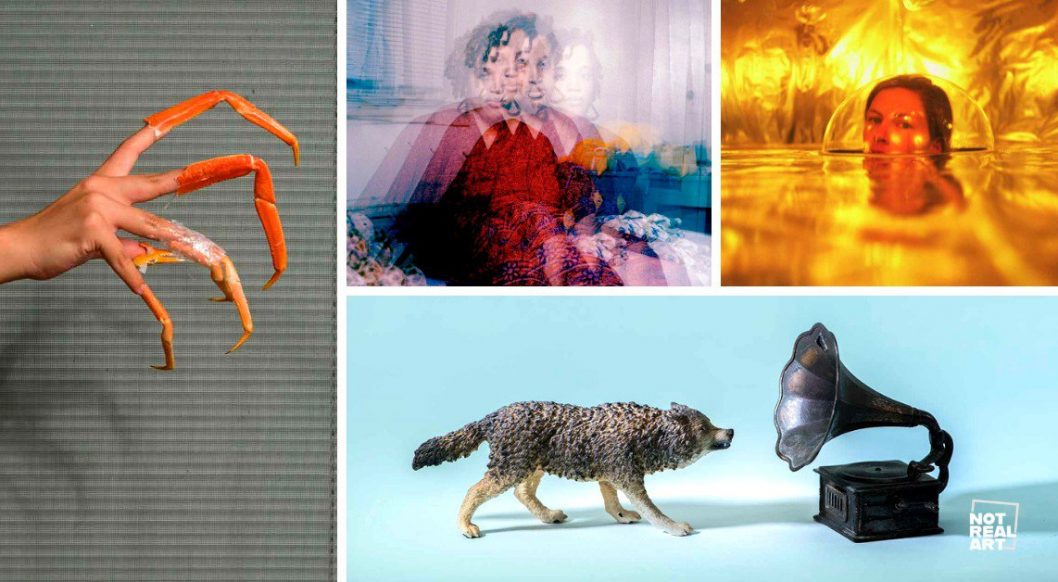 From silver-plated daguerreotypes to Instagram-ready iPhone snaps, photography has come a long way since its invention in the 1830s. Intersecting with broad political and social movements of the last two centuries, the evolution of the camera continues to alter our views on identity, memory, and history.

Many artists who first took interest in photography were women. Unfortunately, early female photographers were bound by 19th-century social structures, which all but barred women from public places. Cut off from access to the world at large, women explored gender, sexuality, and social roles through the subject they knew best: the home. Attitudes today have thankfully shifted—over the last century, photography has exploded as a tool of expression and understanding for female-identifying artists.

To celebrate Women’s History Month, we’re highlighting 10 amazing contemporary photographers who use their work to break mental health barriers, advocate for animal rights, explore the recesses of their own minds, and more.

Check out these contemporary photographers to celebrate during Women’s History Month.

Alexis Rivierre was busy developing work for her latest project, Take Care, when the coronavirus took hold of St. Louis. The interdisciplinary artist was scheduled to put on impromptu performances throughout her hometown when social distancing abruptly halted her plans. In lieu of a physical space to perform, Rivierre took to the internet, sharing her work on Instagram throughout the pandemic. Never one to shy away from digital media, Rivierre adapted to her new circumstances by incorporating the pandemic’s influence into her evolving body of work.

Now based in Brooklyn, NY, Rivierre works with a wide range of media, including textiles, photography, video, and performance, to create the pieces for Take Care. The work, initially meant to address communal healing in the wake of gun violence, took on added meaning with the pandemic’s onset. “I realized that the pandemic will influence this work, requiring it to grow into an expanded wellness conversation; one that investigates the state of this moment, one of overwhelm, media over-stimulus, and a desire for interpersonal connection,” Rivierre writes.

Photographer and stop-motion artist Kelly Zantingh captures the intimacy of time and touch with her moody portraits. Based in British Columbia, the Canadian artist specializes in landscape photography that exposes the human body for the fragile organism it is.

Zantingh shoots around a transient lifestyle, capturing people and places throughout biodiverse British Columbia. Her work is marked by an early interest in the natural world, its history, and its future. “The first few years after graduating, I was very invested in themes of climate change, the Anthropocene, and human interference with the environment,” Zantingh says. “I often expressed these themes through related ideas such as anthropomorphism, cognitive dissonance, and romanticization of the natural world.”

Learn more about the artist: Photographer Kelly Zantingh Discovers the Power of Intimacy with Moody Portraits

The mind can be a terrible thing to taste. Photographer Brenda Maria Fernandez’s nightmarish body of work, This is the Feeling You Thought You Had Repressed, steps into the strange recesses of a drug-addled psyche with powerful if frightening results. The work is “a delicate but dark and unapologetic look at my past […] under the influence of a really powerful ADHD medication,” Fernandez writes in her artist statement.

Working with pitch-black shadows and saturated jewel tones, Fernandez creates an isolated environment where vulnerable bodies stumble through dimly lit hellscapes. One imagines there’s little chance of escape. Those unlucky enough to find themselves in the artist’s self-contained world become trapped, like insects desperately seeking a way out from under glass.

Sweating over a sexy vampire? Chances are your fanged crush could be either male or female. But if meat-flavored drool and excessive body hair are more your thing, you’re probably lusting after a bonafide wolfman. Emphasis on man.

“The horror trope of the werewolf in movies and literature has been overwhelmingly masculine,” says multidisciplinary artist Julia Oldham, whose photographic series She-Wolves examines the genre’s gender imbalance. While the Oregon and NYC-based artist notes the recent rise of female werewolves in pop culture—think Katharine Isabelle’s death-obsessed high schooler in Ginger Snaps or Angela Carter’s beautiful and bawdy stories from The Bloody Chamber—her work pushes the idea to extremes, refusing to objectify its subject matter in exchange for audience hoots and howls.

“She-Wolves reflect the discomfort of being something that society doesn’t expect them to be,” says Oldham, who created the series in 2017 by digitally manipulating her photographic self-portraits.

Learn more about the artist: Julia Oldham’s ‘She-Wolves’ Get Their Moment in the Moonlight

“In space, no one can hear you scream,” goes the tagline from Ridley Scott’s 1979 magnum opus, Alien. Now iconic, the line is famous for teasing the film’s titillating scares, but its true appeal lies in just how lonely it makes us feel.

April Winter’s photographs, shot exclusively on film, cultivate a similar mood. Donning a domed astronaut’s helmet, the artist snaps glossy self-portraits that explore the effects of isolation on the human mind through a science fiction lens. Winter’s subgenre of sci-fi hews closer to heady space dramas—Solaris, Arrival, and Moon come to mind—than the creeping horror of Alien, but the feeling of an indifferent universe remains. “In the past years I’ve been focusing on how isolation affects the mind, playfully combining this with themes of space, dissociation, and depression,” she writes.

Originally an art class model, Rawson soon grew tired of life in front of the camera. Her almost entirely self-taught photographic works look at the nature of inner reality through the lens of her own mental health. “It's been quite cathartic for me to bring my inner world to life,” she notes in her artist statement. With a background in experimental video, Rawson credits her photographic success to past experiences in the avant-garde. Her figures, posed in front of velvet curtains and smeared in blue-black light, live in an insular world, powered by dark magic and cyberpunk style. In the UK, Rawson shoots with modeling agencies and fashion designers, an interest that bleeds into the baby bang- and platform shoe-aesthetics of her photographic work.

Photographer Tiffany Sutton began snapping photos of family and friends after being gifted a Kodak camera one Christmas in her early teens. Primarily self-taught, Sutton now works exclusively with Black women as a way to reconnect with herself and explore social issues that directly impact Black lives. In her Black Body Radiation series, Sutton photographs Black women in mundane, intimate settings, creating a narrative that’s been largely ignored by mainstream media.

If their surroundings are mundane, the women in Sutton’s photographs are anything but. The artist uses a special photographic technique that lets her capture several exposures on one negative, which gives her subjects an airy, barely-there appearance. The radiating, transparent body parts are a product of arrested motion, but they also serve to cloud a uniform perspective. “The barely-there bodies in domestic spaces, and seeing multiple facial and body expressions of the sitter, emphasizes the complexity of each woman,” writes Sutton in her artist statement.

“Am I haunted?” asks Liza Ambrossio in her artist statement for Blood Orange. “Or am I the witch?” Assembled after years of nomadic wandering, the images in Blood Orange chronicle the multidisciplinary artist’s search for personal demons hiding in the rocky landscape of her own mind.

A Mexico City native, Ambrossio became obsessed with the power of image and identity after instinct sent her hunting for family secrets in old photo albums. As an expression of Ambrossio’s emotional clash and eventual break with her family, the idea for Blood Orange was seeded at that moment. “It all starts with a mental image: an orange that bleeds,” Ambrossio’s statement begins, revealing the work as “tainted with the aesthetics of the Japanese counterculture and the Aztec rituals of human sacrifice.”

Photographer Jada Fabrizio creates staged scenes populated with animal figures that spark conversation about habitat preservation and the fragility of nonhuman life. She uses minimalist lighting, reminiscent of a theater set, to throw each figure into stark relief against its antiseptic backdrop. The offbeat photographs from her Animalia series paint a grim but strangely playful picture of a shrinking natural/wildlife environment that grows smaller every year.

Fabrizio mixes elements of set building, sculpture, and installation to create her images, crafting each figure by hand and photographing the result. “I use play objects as a weapon to soften a serious subject matter,” Fabrizio writes in her artist statement. Though much of her work is filled with visual punnery and quirky humor, Fabrizio hopes her work will inspire a more ethical stance toward animals and their habitats.

Alissa Ohashi uses the word gaman—meaning “to bear the unbearable with dignity and grace” in Japanese—to describe the ancestral trauma in her mixed-media collages. Ohashi’s signature installation, Who We Are, investigates the artist’s Japanese-American heritage through a chaotic commingling of found objects, historical documents, and personal photographs. “To the best of my recollection, I have had this deep, unknown connection to imprisonment and freedom simultaneously,” says Ohashi, whose grandparents were forced into Japanese internment camps during WWII.

Based in Columbus, OH, Ohashi uses her collection of personal photographs to create a psychological family photo album full of lived and unlived memories. “My father was not present in my life between the ages of four and 19, and our relationship suffered,” she notes in her artist statement. They’ve since reunited, but her father’s one-time absence sparked in Ohashi the desire for an identity beyond what she could see.

All photos published with permission of the artists.