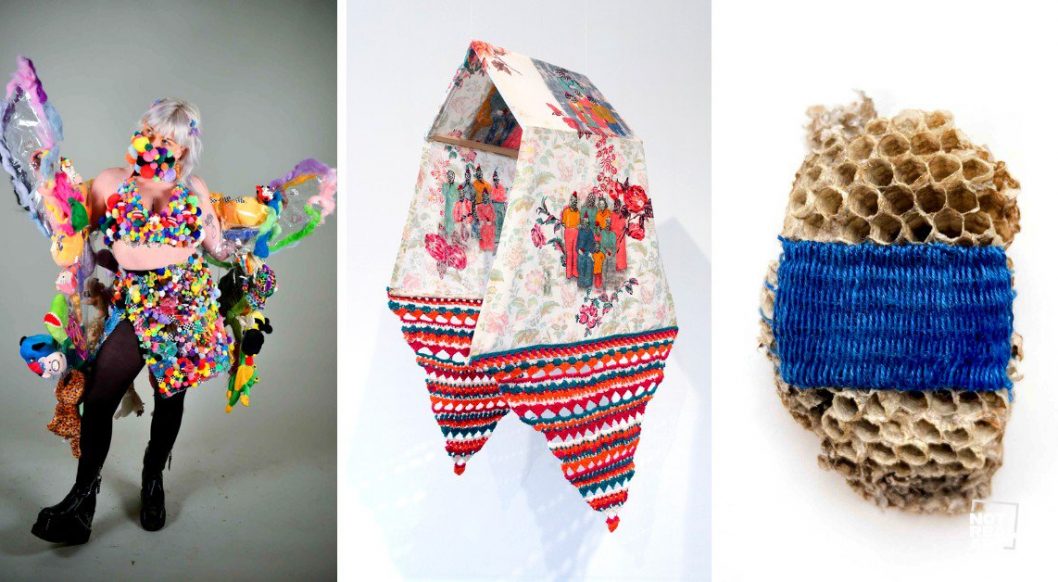 Have you ever thought about what fashions our ancestors wore? While they probably weren’t strutting around in today’s baggy jeans and crop tops, textiles have been around for a very long time. Due to their delicate nature, it’s hard to pinpoint exactly when fabrics first appeared—but they do show up in some of our earliest cave paintings. Silk and linen are both ancient fabrics with origins in China and Mesopotamia respectively, while cotton burst onto the scene quite recently. In the 1700s the Industrial Revolution transformed textile production, then a cottage industry, into a thriving commercial venture.

Viewed as “women’s work,” textiles were—and still are—largely dismissed as a suitable pastime for hobbyists. Their creation and repair were seen as a chore that would greatly benefit the household; a duty so easy even a woman could do it (cue eye roll). It’s no surprise contemporary artists sometimes shy away from the medium, given its fraught and gendered history.

Despite its craft label, textiles are enjoying a major renaissance in some art-world circles. Female-identifying artists are casting aside dated assumptions about the medium, creating groundbreaking work that goes way beyond household duty. To celebrate Women’s History Month, we’re highlighting 10 amazing contemporary textile artists who use their work to navigate personal and political histories, wade through class and consumerism, and—of course—smash the patriarchy.

Check out these contemporary textile artists to celebrate during Women’s History Month.

Crammed sardine-style into a white cubby, Janet Currier’s pile of blobby sculptures captures the frailty of the human body as it copes with a restrictive identity. Working in paint, sculpture, and installation, the London-based artist explores an internal world filled with memories of motherhood, quiet anxiety, and the stresses of existing as a woman in an increasingly perilous world.

Pushback, Currier’s blobby installation from 2019, consists of 45 soft sculptures, hand-stitched from fuzzy pink fabric and stuffed into a found shelving unit. Currier uses a fleshy pink color for much of her fiber work, carefully choosing slight variations of hue with plenty of brown undertones, instead of an artificial hot pink or trendy Millennial pink. Next to the cubby’s cold, clinical surface, Currier’s organic blobs look downright unnatural, conjuring images of an exhausted body in a sterile hospital. “The female and maternal body is never far away,” she writes in her artist statement. “Soft sculpture installations suggest flesh that is squashed and compressed […] sometimes the shape of a body, or an imagined internal view is seen in the work. It is most often a body that is threatened or threatening, a body being probed or that is sick or leaking or somehow not quite able to contain itself.”

Learn more about the artist: Janet Currier Captures the Unseen Labor of a Woman’s Love

Far from establishing common ground, masks typically hide, conceal, or obfuscate. Hurst flips the expected script in her series, creating characters who reveal themselves in eerily familiar ways. Drawing on Carl Jung’s idea of the collective unconscious, Hurst ritualizes the act of mask-making to express the archetypal forces driving our thoughts, actions, and feelings. “The concept is to explore the idea that no matter how far society has evolved, the basic instincts and personality traits of ancient cultures still prevail,” says Hurst, who incorporates both ancient and self-created mask designs into her series.

Enveloped in patterned fabric, Hurst’s subjects seem to rise and sink simultaneously, their social status cemented with business casual clothing. “[The clothing] is representative of upper-class society and how far they have advanced in a material and monetary sense,” Hurst tells NOT REAL ART. “The high-class business attire […] juxtaposes the primitive with the refined.”

Ekinci begins with found bedsheets, often patterned with faded flowers, to create her embroidery paintings and fiber sculptures. “The domestic surfaces, such as the used, patterned bedsheets, hold personal and bodily history invoking feelings of home and intimacy,” she writes in her artist statement. Intercultural family portraits hover over the patterned flowers, allowing Ekinci’s Turkish heritage to mingle with her life in the American Midwest. Often, the artist obscures the identity of an aunt, sister, or husband with dabs of translucent paint and colorful embroidery.

Madison Nelson’s work lands somewhere on the spectrum between sleaze and glamor. Assembled from textiles and reflective rubbish, her neon-soaked works overwhelm viewers with the language of consumer culture: abundance, saturation, and sensory overload.

Using recycled materials, the Texas-based artist examines consumerism’s role in the destruction of our planet. “My curiosities lead me to wander, searching for new experiences, yet wherever I go and whatever I do, pollution and the patriarchy saturate the world around me,” Nelson writes in her artist statement. “Visual imagery and consumerism inundate my generation, saturating the senses—and yet this serves as a catalyst and inspiration for tackling this often ridiculous social construction through my creative practice.”

Though Emma Freeman spent her time in quarantine grieving, she was able to channel much of her melancholy into deeply meditative works. She combines found natural materials with fuzzy thread, woven and then wrapped around brambly bird nests and knobby birch bark strips. With a focus on the principles of Zen Buddhism, Freeman’s work evolves slowly, allowing room for thoughts to appear and then disappear as she weaves, writes, and meditates. “As I sit and watch what is in front of me and bring my deep attention and awareness to it, I start to notice doorways that invite me to walk deeper into the world of the materials and deeper into my own inner experiences,” she writes in her artist statement.

“Creating destroys as it builds,” says fiber artist Casey Neumann, whose exploration of labor through craft echoes a shift in the way we think about making. The NYC-based artist is keenly aware of each cut and every stitch that goes into her woven paper works and hand sewn fiber pieces. “The presence of the maker can be felt through viewing or touching the resulting piece or object,” she notes, establishing a physical connection between material, maker, and viewer.

In her work, Neumann draws a straight line between labor and the ability to connect with the world at large. Her philosophy parallels the public outcry surrounding low wages and labor laws around the world during the recent coronavirus pandemic. According to social scientist Karl Marx, we shape the world around us by laboring in concert with our fellow human beings. When we work for others who exploit labor as a cheap resource—think earning minimum wage at the massively successful McDonalds—we become alienated from our labor and the products of that labor. Eventually, we become estranged from each other. Neumann’s work attempts to salvage a small connection to the world by reveling in the sheer joy of making, not for a boss, but for herself.

Learn more about the artist: Fiber Artist Casey Neumann Explores the Concept of Labor Through Craft

With a background in fashion design, von Freyburg translates the pastel colors and lighthearted eroticisms of Rococo into dimensional works she crafts from contemporary fashion fabrics. Her work comments on the sensual frivolities of the upper classes by mimicking the colors and compositions of works by French artists like Boucher and Fragonard.

Blending art and science, multidisciplinary artist Heather Beardsley borrows her visual language from zoologists. The Virginia Beach-based artist works across a variety of mediums—found photographs, fiber, and sculpture—to explore the relationship between humankind and nature from a global perspective.

In 2017 Beardsley visited Chernobyl in northern Ukraine, the site of a disastrous 1986 nuclear accident. Using an old, found photo of nearby Pripyat, now a ghost town, Beardsley hand embroidered the image with the wild plants and flowers she spied overtaking the city during her visit. She would eventually add works inspired by later travels: Budapest, Vienna, Beijing, and Las Vegas are among the cities the artist has decorated with embroidered plants and flowers. “In a time when cities are growing at an unprecedented rate, nuclear tensions are at a post-Cold War high, and we are feeling the effects of climate change more every year, these pieces pose questions about what the future holds,” Beardsley says of her Strange Plants project.

Learn more about the artist: Heather Beardsley Brings Wide-Eyed Wonder to the Art of Science

Though she was born in Geneva, Switzerland, textile artist Anya Molyviatis spent much of her youth traipsing through North America's wild and urban landscapes. Her chromatic weavings respond to natural environments, re-engaging modern, disaffected viewers with the world around them.

Molyviatis is a self-described weaver at heart, but before she ever touched a loom, the artist developed an interest in environmentally conscious design. After graduating college in Switzerland, Molyviatis soon found herself stateside, studying sustainable architecture in California. From there, she went on to study ecologically harmonious, human-centered landscape design at Cal-Earth, where she refined her ideas about civilization and the natural world. “I started my career by studying sustainable architecture because I was fascinated by the relationships between humans and the spaces we inhabit,” Molyviatis tells NOT REAL ART. Her time at Cal-Earth built on that interest, encouraging Molyviatis to experiment with new materials and ways of thinking.

Artist Kathryn Shriver doesn’t believe in fate. Growing up working class in the eastern-most Rust Belt city of Buffalo, the multidisciplinary artist now takes a critical eye toward the middle-American values that shaped her upbringing. In her latest body of work, AND THE FATES PUT DOWN THEIR HANDS, Shriver looks at the mythos behind literary and folkloric traditions in the West, their implications, and their limitations.

Like many American children, Shriver studied the Western classics and learned about Greco-Roman mythology during her formative years. In an era when women were refused the right to express themselves in the arts, white men defined the high literary canon, choosing to celebrate works that mirrored their own point of view. Shriver points out these male-focused literary traditions, now so ingrained in Western culture, carry consequences for the young minds who absorb them. “As a teen, I developed a peculiar brand of internalized misogyny,” she writes in her artist statement, suggesting a link between her state of mind and a desire to see herself through male eyes: “[I wanted] to see myself through those…romantic damsels, or furious, fearsome goddesses that always seemed to be karmically tragic, damned, or demonized for their power, allure, or mere existence,” she continues.

Mixed-media artist Elham Bayati is known for her meticulously layered masterpieces. Born in Tehran, Bayati is inspired by the traditional Persian textiles she remembers from childhood: floral scarves and dresses, worn and handcrafted by her mother and grandmother. With floral patterns as a common thread, Bayati’s work deepens our understanding of the feminine as a source of unseen power in male-dominated societies. “I paint the many flowers that [grow], even though patriarchal society [tries] to cut them,” she says of her work.

Learn more about the artist: Memory of Flowers: Elham Bayati Celebrates the Power of Persian Women