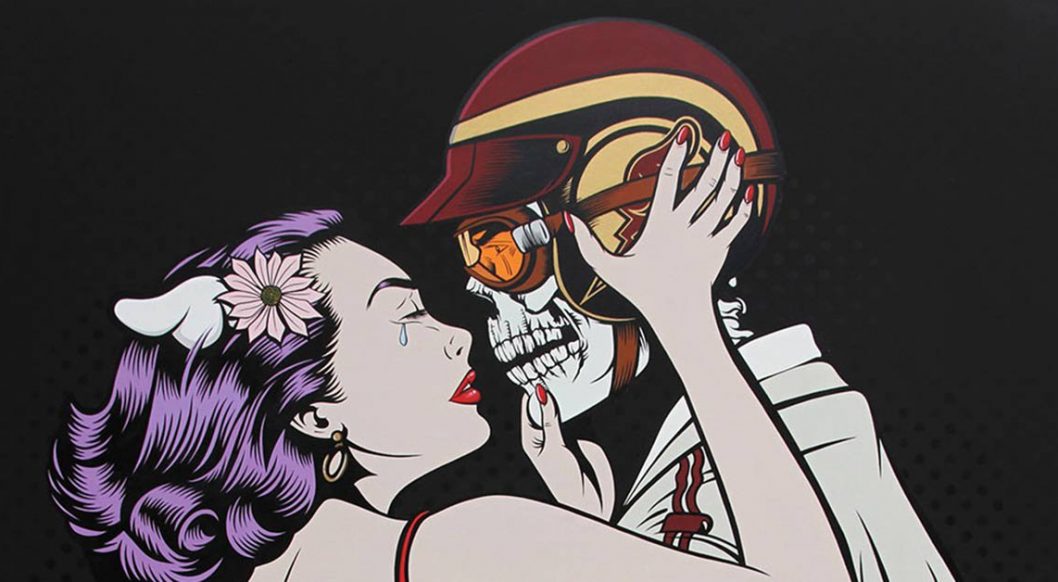 “After living through an unprecedented, historical moment in time that saw us globally locked down as a result of the pandemic, I think we’ve witnessed our fair share of ‘cracks’ appearing across society and culture alike,” he says of his upcoming solo show, Painting Over the Cracks, which appears at Corey Helford Gallery in August.

A painterly play on the idiom “paper over the cracks,” the show’s title alludes to D*Face’s career as a muralist and his fascination with the self-help consumerism of the 20th and 21st centuries. “With nearly 100 murals under my belt, I’ve spent my fair share of time painting over real cracks in real walls,” he notes. “[The expression] essentially refers to the act of ignoring or hiding an issue in both the literal and metaphorical sense—it’s putting on a brave face and pretending that ‘the issue’ doesn’t really exist.”

Often describing his work as “aPOPcalyptic,” D*Face picks up where American Pop art left off, twisting the original vision—optimistic, generous, and naive—into biting social criticism. Inspired by advertisements, classic film, and comic books, the London-based artist uses a pastiche of familiar images from our cultural lexicon to create his tongue-in-cheek work. Picture American Golden Age classic Casablanca recast with a tattooed mermaid and sinewy skeleton couple. “I wanted to play on this expectation of predictability in the show by twisting some of Hollywood’s most iconic creations,” he notes. “Defacing and reimagining the images we think we know and trying to break that cycle of comfortable, knowable nostalgia.”

Neither a love letter to our losses or a celebration of pandemic-induced change, Painting Over the Cracks chucks the rose-tinted glasses in favor of a plain pair of spectacles. “It’s good to take a peek through the cracks of the real world,” D*Face says. “Just a little jolt of something different to snap us out of post-covid cruise control.”

If you’re in the area, Painting Over the Cracks is on view August 6 through September 10, 2022, at Corey Helford Gallery in downtown Los Angeles. For more information, please visit the gallery here.

“It’s good to take a peek through the cracks of the real world.” — D*Face