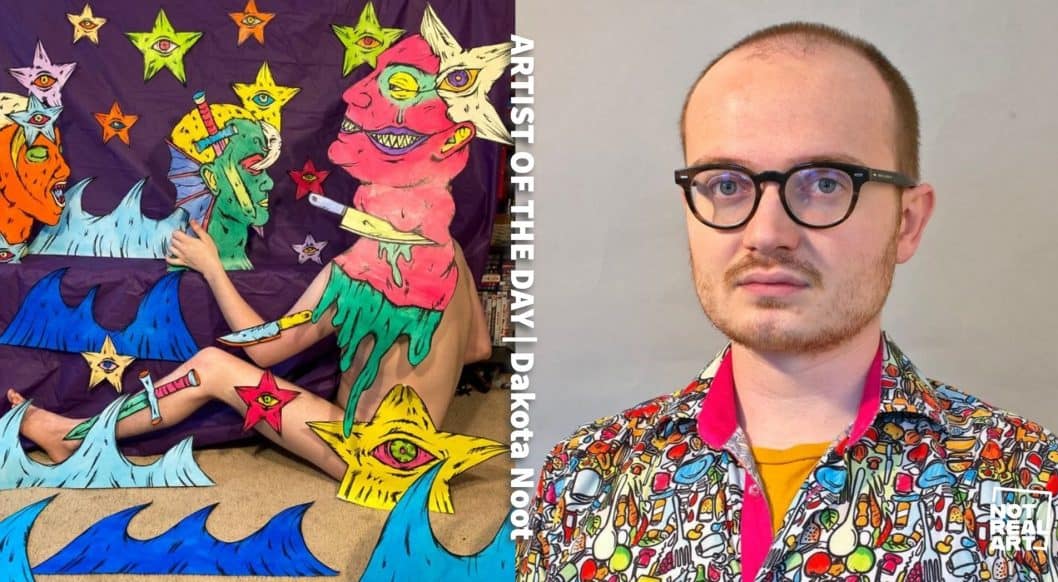 Growing up with farming relatives, in a state that boasted more than two cattle per person, has had an influence on his work. Noot’s edgy cut-outs “challenge queer art, art about meat and animals, and traditional presentation of drawings.” Inspired by coloring books, cartoons, TV shows, and cowboys, his mixed-media installations explore the violence in the meat industry and investigate queer identity issues. Using accessible materials such as crayon, colored pencils, marker, and foam core, he adheres his drawings to his body with painter's tape. His photo-performance, Whoa there Cowboy, features a mutant gunslinger covering Noot’s unclothed form, with knives and organs adorning his loins and limbs.

After earning his BFA in North Dakota, Noot sped to Los Angeles for graduate school. He is currently an adjunct professor at Oxnard and Orange Coast Colleges, and has shown his work in art and performance venues along the West Coast. Considering himself a ‘weed in the art world,’ who has never belonged to a particular genre or group, Noot has also exhibited in non-traditional spaces, such as a local Kentucky Fried Chicken, and on public streets. His playful but provocative approach to art-making enforces his status as a cultural outsider, dancing on the fringe between humor and darkness.

Even though I have a lot of experience with the art world, my work doesn't fit in. I also don't try to fit in anymore. The pandemic took away my energy to downplay or sanitize my work. I make the work I want to make – and invite others to be just as playful and colorful. – Dakota Noot

I draw paper worlds. With crayon, color pencil, and marker, I create installations and wearable art that can be taped to my body. I want to transform myself, playing with my own species and identity. Paper cutouts enhance and transform both my appearance and my studio apartment, making me into a cartoon character than can be rural, violent, and queer. My work imagines my life like a cartoon show, leaning into humor and slapstick through photographs and videos that document the drawings. I often play into science fiction, fantasy, and horror tropes. Even when my drawings are of cowboys or historical rural figures, they become mutated. Extra limbs are grown, removed, and eaten in paper-form. Animals devour humans or become one with them.

Although I grew up in rural North Dakota before moving to Los Angeles, I still understand my world through genres like body horror and film. Instead of watching the TV for escapist fantasies, I now live in and create it. My materials are inspired by children’s coloring books. I emphasize my outlines with markers and color them with crayon. I adhere them to my body with painter’s tape or on free standing foam core cutouts. My work is like a children’s TV show, but played after dark with more suggestive themes. Tune in.

Dakota Noot is a Los Angeles-based artist. He uses drawings, paintings, and installations to create animal-human hybrids that explore rural yet fantastical, queer identities. Originally from Bismarck, North Dakota, he continues to show in both North Dakota and Los Angeles, including solo and two-person shows at Highways Performance Space, MuzeuMM, and PØST. Noot has exhibited in group shows at LA Freewaves, LAST Projects, Cerritos College Art Gallery, and Otis College. Noot graduated with a BFA in Visual Arts from the University of North Dakota (2015) and an MFA from Claremont Graduate University (2017). He is currently an Adjunct Professor at Oxnard College and Orange Coast College. Along with Christopher Velasco, he co-founded the nomadic curatorial project Scream Queen. He was the key artist for the 2018 Slamdance Film Festival and the 2021 Film Maudit 2.0. Noot will complete a residency in July 2021 at Art Produce (San Diego, CA).

Dakota on the Web And Social Media

Here is where to find out more about Dakota Noot on the web and social media: