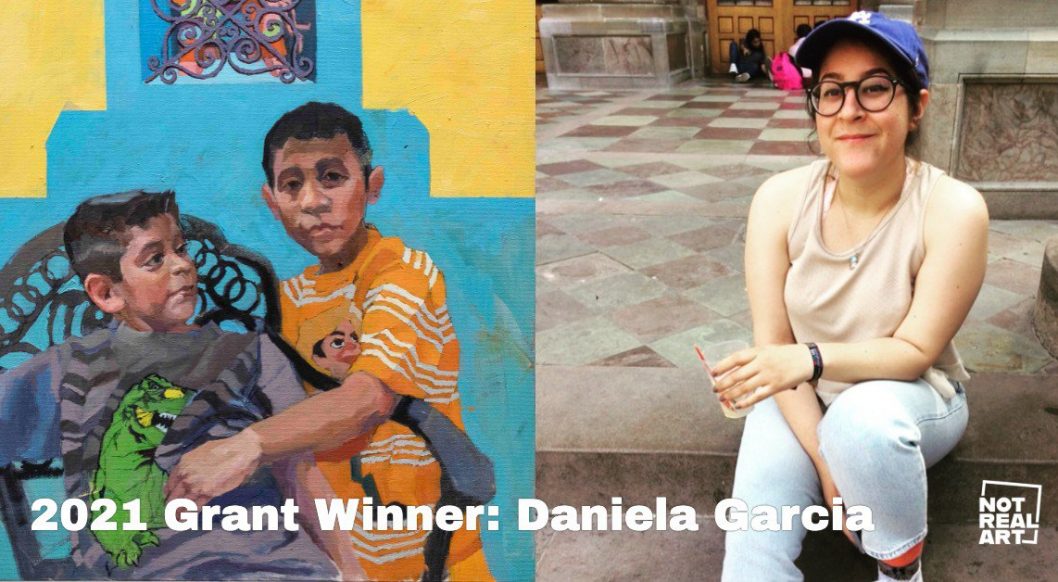 Grant winner, Daniela Garcia, grew up in Lake Los Angeles, a small town on the outskirts of the Antelope Valley, and Guanajuato, Mexico, respectively. Splitting her time between the two communities, Garcia shares that “going back and forth between Lake LA and my dad's small town felt very similar. The culture was the same. I was constantly surrounded by immigrants or my dad's close-knit family.”

“Art is a connector.”

Garcia’s artist statement reads, in part, “From a young age she was raised surrounded by immigrant communities and traditions, her father was a refuge for anyone who needed a place to stay as they immigrated from Mexico to California. Her art practice centers around this experience.”

Garcia’s watercolor titled “Frontline Daycare,” captures this experience in rich detail. “A lot of the kids who stayed with us were around my age or younger. Moving into a little one-bedroom apartment somewhere in the San Fernando Valley was a huge improvement for them because they were coming from my dad's little rural town, where most of the houses had running water, but not all of them. There's no internet, there's no real stores. It's a very limited place to live. Getting the opportunity to go to a city like the San Fernando Valley was a game-changer for them because there was such a high demand for underpaid labor.”

Garcia shares that between the ages of 3-12 years old, one of her most vivid memories is of the flux of people coming in and out. Her father was the only one in the family to own his house, a small space he offered as refuge to immigrants in transition. “It was a tiny house. I’m pretty sure it was less than 1,000 square feet. There was always someone new coming to our house. Our house felt like a hotel. There was always someone staying with us while they were in their transition, trying to figure out where they were going to get a job and where they were going to settle down. It wasn't until I was a lot older that I realized that the reason they were staying with us was because they were immigrating here. I thought it was just family members visiting.”

It was during this time, surrounded by an influx of people, that Garcia had her first thoughts of becoming an artist. “I started drawing everything I saw things that I liked. I was always interested in drawing people. I'd been drawing people since I was around 9 years old and I just kept going throughout high school.”

From nursing to art…

Garcia originally planned to be a nurse when she realized she found it depressing to be in hospitals. “I was one class away from getting into the nursing program. Then I slipped, and I was just like – I don't want to do this. I want to do art. I remember when I made the switch, I didn't tell my dad because I knew he was gonna get mad. I didn't tell him until after I had finished the two-year program at the community college and I was getting ready to transfer for the actual four-year program at Long Beach. That's when I told him that I was going to study art. He was so upset. He didn't talk to me for two weeks. He was disappointed.”

Eventually, Garcia’s father changed his mind and is now her biggest fan. “He was kind of on edge the whole time I was at Long Beach, but I always told him I was going to be a teacher, too. I knew I was going to get the credential because I like coming from that mentality of growing up in poverty and being told you have to get out of it. I knew I had to find a way to make money that didn't rely on art…It wasn't until I won my first big award at the Braid Gallery the year that I graduated from Long Beach and he saw the paintings and actually stood in front of them that he realized that all of the stuff I made was about all the things he taught me. It was all about his history, our history. He [said] ‘I've never seen anything that tells a story about me.’ Ever since then, he's been super proud.”

“I strive very hard to create narratives that connect with my family. I want them to see themselves…I want them to identify themselves in the work because it is ultimately about them.”

Garcia’s early mentors were an art teacher in elementary school and one in high school who pushed her to keep going, even gifting her with supplies to help support her art. Now a teacher herself, Garcia shares that she sees a pattern emerging in her students today that she finds challenging – a constant drive towards perfection. “A lot of my students don't want to show anything that they have if it’s not at a level to be shown. That’s been a constant, uphill struggle – trying to get them to let go of that. I encourage them to make those mistakes. That's the only way you get better. No one is perfect. Everyone has to keep working at it and it's unrealistic to think that you're going to hit your peak in high school. Leave all of that for later when you're 20 years into your career.”

The temptation to self-criticize and dive headfirst into the Imposter Syndrome pool is not lost on Garcia. “Every time I step foot in my studio, I feel that imposter syndrome. Even as a teacher, I'll be up there getting ready to teach a lesson and I’ll be like, ‘Why am I teaching these kids? I don't know anything about this stuff. It’s the same thing in the studio. I have to hype myself up. I mean, it's tough. But I've gotten a lot better at it, where I've become a lot less precious with the work I make. I'm a lot more willing to just dive into something without really knowing what the end results are going to be. And that's been really liberating. And it's helped me kind of create work that I think tends to have a deeper meaning with other people.”

Garcia shares that her process has become a lot loser now. While the music that she grew up on plays in the background, “Small ideas spark. I’ll stretch a canvas or prime it. Then I'll start off with a very, very loose charcoal drawing of just the major things I want to see in the painting. Then I'll slap a layer of paint on, scrape it off, and I'll kind of do collaging. I paint different things, remove them, add something else, and change their position. It's kind of like rearranging the work until it gets to the point where it makes a little more sense. I’ve become a little looser. In the beginning, I used to plan things out to the tee. I had to have the drawing done from start to finish. I had to make sure that everything was exactly where it needed to be before I put any paint on there. I felt like that really held me back.”

A conversation with the work…

“I started going with the flow. I like to think of it as a conversation with the work. What does it mean? What am I trying to say? I've noticed recently that what a painting is trying to say to me changes when I start another painting. Then I'll go back to the other one that I thought was done and change it up a little bit. So it ends up being kind of like a fluid conversation between multiple works.”

Garcia says the intentional message of her art is that the experience of immigration is a universal one. “It's not just about the immigrant coming from Mexico, Central America, it's about the process of uprooting wherever it is you're from and trying to assimilate without losing yourself in your new environment. I feel like that's something people that have never even left the country can relate to. Because if you're moving from Ohio to California, that's a culture shock. Even moving towns within California can be a culture shock. I’m trying to communicate the idea that this is something we all go through at some point. It's just that, usually with immigrants, it's a lot more intense, because it's a world that says they have to somehow figure out how to fit in without giving up like who they are.”

“What I hope to do with the work is to kind of give [people] the opportunity to come into a space where they feel a little more welcome to try to engage in a conversation. I feel like that's where the roadblock hits…The most important thing is to be willing to empathize with others. Regardless of what your viewpoints are, being open-minded is something that is going to create change.”

“For me, beauty is a kind of truth. When the truth is said, it can come across in a lot of different ways. I've seen artwork that's just beautiful because of how simplistic and raw it is. But it's a message. It connects to the point where the truth kind of shines through. And to me, that's always the most striking work.”

“It would be a very sad, disconnected world without art.”

“A world without art looks like a world of 100 people living in their own small realities without the ability to connect to each other. Art is a connector.”