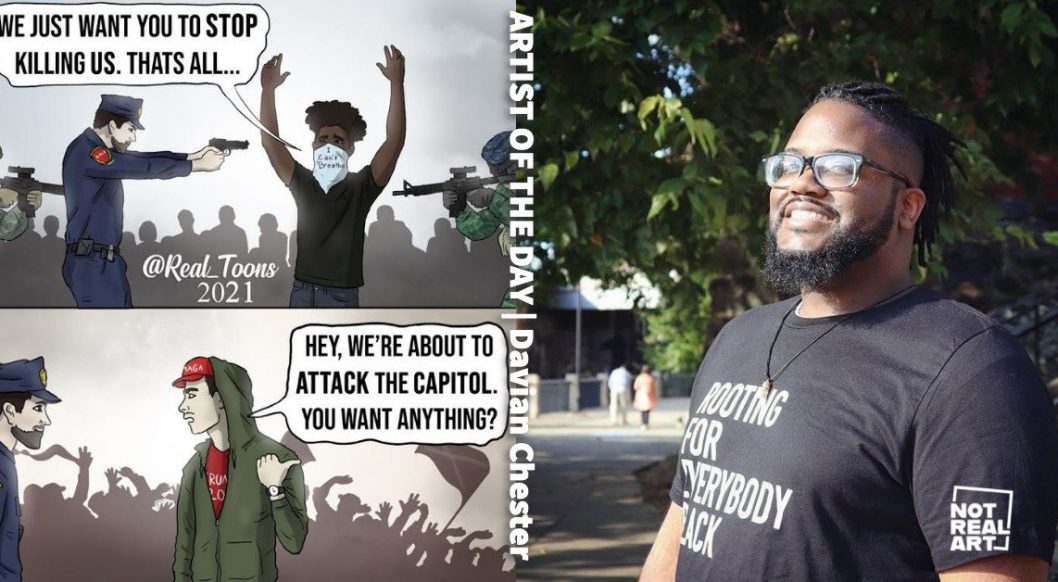 How Cartoonist Davian Chester Convinced Google to Get Their Act Together

Digital Artist Davian Chester is known as the ‘Juneteenth Guy.’ In 2019, he turned to Google on the nineteenth of June and was shocked by the absence of a Doodle commemorating the emancipation of enslaved Americans. He hastily put together a drawing to honor this historic event and posted it on social media. After circulating among family and friends, it went viral.

Chester’s empowering drawing of two clenched Black fists sundering the links in a pair of handcuffs that spelled out “Google” ended up on a billboard in his home town of Columbus, Georgia with the support of a local arts group. It wasn’t long before it reached Google. As a result of his efforts, a commemorative Doodle has appeared on their home page acknowledging Juneteenth ever since.

Chester has been involved in the arts since childhood. His drawings of superheroes in elementary school resulted in his fellow students clamoring for portraits. He discovered the joys of digital illustration in high school and earned a college degree in Design and Visual Communication. Chester has maintained a successful career as a cartoonist and freelance artist while teaching art on the side to at-risk students at Empowered Youth of Columbus. He is a regular contributor to the Miami New Times.

My art focuses on Black Lives Matter. I bring awareness to the current events as well as promote more respect and appreciation for African Americans. There is far too much injustice not only from other races to us, but even in the African American community. My artwork fights for equality and fairness all around.

By illustrating moments from Black experience, Chester uses humor and personal anecdotes to counteract the rise of white supremacy and prevalence of racial biases in American life. His wry political cartoons are known for their searing social commentary, so it’s no surprise his work made an impact. Chester’s burst of inspiration on the nineteenth of June shows how a single voice can spur a movement, and inspire others to do the right thing.

Davian Chester is best known as the Juneteeth Guy after calling out Google over their lack of a Juneteenth Google Doodle. The tech giant finally released an official Juneteenth Google Doodle in 2020. Since then, Davian has made a major social statement with his art. By Illustrating the Black Experience, his work has brought awareness and initiated multiple discussions in the African American community. He is currently a regular contributor to the Miami Times.

This is a conversation piece based on the attack on the U.S. Capitol.

This is a collaboration of my most conceptual Digital Illustrations.

This is a conversation piece I created during Black History Month. Inspired by "Good Trouble."

This is a conversation piece to bring awareness to mental health in African American men.

This is a conversation piece to ask the question can you be Pro Black but date outside your race.

I am a creative from Columbus, Georgia. I have been drawing since elementary school but found my calling for digital art in high school. I enjoy telling stories and letting my work bring emotion to its viewers. I plan to have my own gallery space one day. As well as a creative space for other artists to work and showcase their art.

Davian on the Web And Social Media

Here is where to find out more about [ARTIST NAME] on the web and social media: