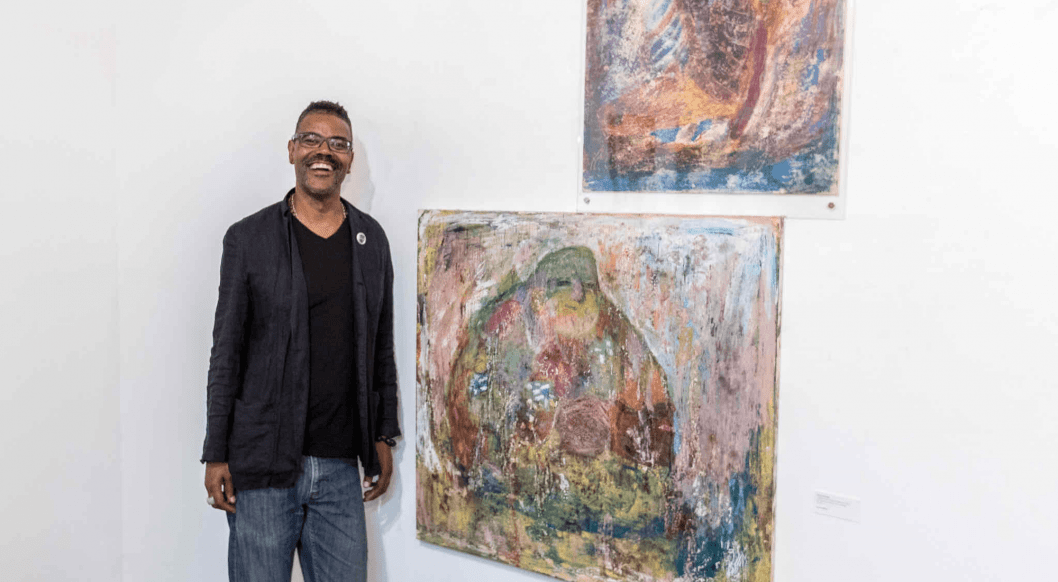 Eben Eldridge is a painter, a musician, and a preschool teacher who says his duty to the kids is to teach them the basics, the “straight-up, social-emotional reality.”

Eldridge discovered his artists’ muse while teaching an after school program in Seattle when a student questioned why he wasn’t participating and making his own art. “So I started painting with the kids and I started to like some of the [painting] and started taking them home. And then the same little girl said, ‘How come you never give us your art?’ Because kids will give you their art because they love you. They had watched my selfishness. Everything I made that I liked, I took home. That doesn't work for kids. They don’t get that.

“So I made this flamenco dancer that I was so excited about and I said, ‘Okay, the next thing I make that you like, I’ll give it to you.’ So of course, she came over and saw the flamenco dancer and said, ‘I want that,’ and I was just crushed. But I said okay because you always have to keep your promises to children.”Later, when the child’s mother came to pick her daughter up from school, she took one look at the flamenco dancer and said, ‘Make him sign it.’ Then I knew I was making real art for people to see.”

“The best thing about being an artist is the relationship with the muse, the goddess, the one who creates all art through you.”

That real art eventually led to submitting for the Not Real Art grant. When asked what his reaction was to the news that he’d won, Eldridge shared, “I actually thought that I was being lured into one of those Sheriff Deputy things where they tell you that you've had too many tickets and then they arrest everybody. I’ve seen what happens to some of those winners,” he laughed.

Eldridge was born in Philadelphia and spent much of his early years “crisscrossing around the country,” with his parents as they followed his father, a museum curator, to various jobs. When asked how frequent relocations impacted his art, he was somewhat skeptical that it had much influence at all, then added, “In diverse environments, you get a lot of input from different experiences. I'm sure that kind of opens you up. Eldridge got to see the Hopi rattlesnake ceremony and recalls, “As a child, I saw somebody get bit by a venomous snake and transmute the poison and live! I’ve seen some things people don’t normally see.”

You can be powerful; you can be fully realized as a black male human being.

As a child, his mother took him to see James Earl Jones in Othello. “It was the first thing I ever saw. My one question to my mother was, ‘Is the black man in charge?’ Because at nine years old, I didn't know any black man that was in charge of anything. And my mother said ‘Yes, he is.’ I was like okay…you can be you can be powerful. You can be fully realized as a black male human being. I don't know if I got it on all those levels, but I had the question.”

“Then the OCD takes over. I have to be careful. If I go home and I have my backpack on after school, after working for nine hours with four and a half-year-olds and I pick up an oil pastel before I put the backpack down – seven hours later, the backpack is still on my back, and I'm painting.”

When asked what his emotional state is after finishing a piece, Eldridge says, “It's better than TV, I'll tell you that! Once I've completed something, I'll come home and eat with my painting. I'll just stare at it. Like you'd watch The Sopranos, you know – this is episode nine of my painting tonight…It's good to get into your observer.

“You create your art, but you also get to witness its growth and changes.”

“Art transmutes and changes as you go through its different stages. So when you go to put an art show together, your art changes. When it’s under different lights when it leaves your living room and goes to another wall, it changes and the relationship between paintings changes. It's part of your growth as an artist, to let your art take you on its journey. You create your art, but you also get to witness its growth and changes.”

On the Inner Critic

“It does come in and wreck shop. But I leave it at bay for a long time. I try to stay in creative mode because I love the artists’ eyes you get when you're in creative mode. Then I let it in, and then I have to sit with those feelings. You have to walk around the block with your creation. You have to own it…you almost have to do detective work. Was I honoring myself during the process? Did I give? Is that exactly what the painting asked of me? Did I deliver? Yes? Ok then, I’m out.”

On mentors and influences

“This kindergarten art teacher in Seattle told the kids to fill up the whole page, to use all the available space. She said, ‘You'll know when you're done, it'll be clear to you.’ And it was. Children always know when they're done. So I took a lot from her teaching. And then I had a good friend, Mark Durham, who passed away who was just fierce, a creative genius of a soul. He did a series of watercolors of mainly black writers – Alice Walker, James Baldwin. He was gay and he depicted the black gay scene, in the 80s and 90s and he really took risks. He was so fierce about painting. He had an art show where he put in 52 paintings and 20 of them he painted in the last three days. And I said – oh, that's what a muscle looks like. That's what a gangster is!”

People don't know the value of having an original piece of art to interact within their homes until they have it. So one of the things I do is that if somebody comes up and they say they like a piece of my art, I say, take it home. Give me half the money and take it home. If you don't like it, I'll give you that half back. No one has ever returned the money if they took my art home. Nobody handed Vincent van Gogh back one of his pieces that he traded for soup! That never happened.”

“A relationship with the muse, the goddess, the one who creates all art. It’s the kind of thing that just grabs you by the back of the neck. It’s a very powerful force. I will say…it's not for the faint of heart.”