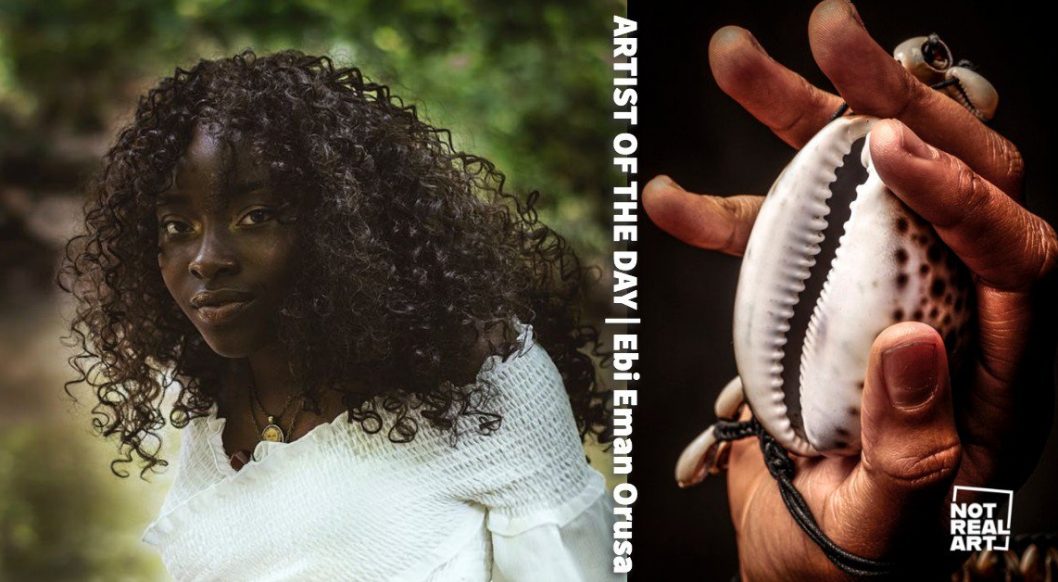 Savannah-based artist and writer Ebi Eman Orusa had an eye for photography as a child, but she didn't find her niche until she was a teenager. After being preoccupied with words before turning to the camera, Orusa combined her interests by pursuing a career in photojournalism. A recent series of portraits focuses on the orifice-shaped Cowrie shells that wash up from the Indian Ocean onto the West African coast. Her evocative photographs of people with shells have a symbolic resonance that reflects their significance in African cultures and religions.

Because of their unique shape, Cowrie shells were considered ‘mouths of the gods.’ Their resemblance to female reproductive organs caused them to be used as fertility symbols by women to harness the ‘power of the ocean,’ and worn by men to increase their prosperity. Cowrie shells have been used for protection, to channel the spirit world, and in place of currency. Orusa’s lush staged portraits bring to mind the work of the late Brazilian photographer, Mario Cravo Neto, whose photographs of people, animals, and objects created a spiritual experience for the viewer.

Orusa’s creative journey has not been without challenges. She was ‘mocked with racial remarks’ while presenting art projects in college, turned down for jobs, and excluded from working certain events. She has found greater acceptance online where she has a highly receptive audience. Her goal is to create thought-provoking photo essays that increase awareness of her cultural heritage, inspire artists from diverse backgrounds, and open new worlds for Western art viewers.

In looking at history, especially Western history, there's a focus on work produced by white artists. That makes work produced by artists of color seem out of place and usually hard to understand by general public. People don't always feel comfortable having to deal with work centered around racial trauma or cultural identity…… My work is meant to challenge my Western audience and educate them on culture and subjects that they aren't used to seeing… The art world has made many improvements from the way things used to be way before my time, but there is still work to be done.

Cowries wash up to parts of Africa from the Indian Ocean. They are thought to hold power, specifically in African Religion, and they were also used as a form of currency in many parts of West Africa many years ago. They are believed to be the mouths of Orishas (Gods). That is mainly due to the shape of their opening and how they mimic teeth. Their front side is shaped like the belly of a pregnant woman. When the backside is carved out, it looks like the female reproductive organ. This is why they were also used as gifts of fertility for women, many women would wear them on their waist. Many men wear them because they symbolize the power of destiny and prosperity. For women, they represent goddess protection and the strength of the ocean.

This project is my way of honoring the symbolism behind the shells that has been long forgotten by many. Some wear them for aesthetics but they usually don’t understand the ancestral power of what they are wearing. I attempted to capture the power and symbolism in my photographs, I hope you can feel their energy.

Cowrie shells are believed to be the mouth of the Gods in African religions.

Children of Oshun wear them for protection, and to channel our spirit guides.

Cowrie shells used to be used as a form of currency and they varied in size. The bigger the cowrie shell, the more money. They also show a status of wealth with size as well.

Children of Oshun wear them for protection, and to channel our spirit guides.

Iyawo Cowrie loosely translates to cowrie bride in english. The title is in yoruba. Cowrie shells are something given to women who have recently married as a sign of fertility and good fortune.

I've always had an eye for photography but I didn't start taking myself serious and really fine tuning to figure out what my niche was until around the age of 16. I was a writer before I got into photography. Through both crafts, I manifested the pursuit for a career in documentary photography/photojournalism. I’ve been in love with it ever since and I currently still a documentary photo major in undergrad. I have been able to perfect both crafts even more in the years that I've been here. I am grateful to say that a lot of my personal work deals with cultural identity and representation in western media. That is my way of nurturing the child in me that had to navigate early years through the lens of a minority in a predominantly white society. I always felt like something was wrong with me, now I realize that it's my differences that make me strong. I explore that through the lens of visual storytelling so that other people who have had a similar experience can also feel seen in these tough times. I am always pleased to see how people react to my photo essays because the passion comes across in each body of work I produce.

Ebi on the Web And Social Media

Here is where to find out more about Ebi Eman Orusa on the web and social media: