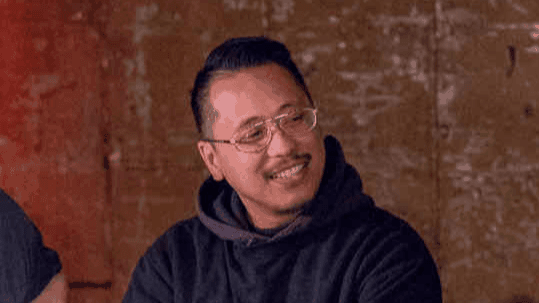 Edmund Arevalo grew up between the Philippines and the U.S. in what he describes as “somewhat of an unstable environment.” While his parents were caring for his grandparents who resided in the Philippines, Arevalo was tasked with learning the language and finding his balance between “two different cultures.”

“The best thing about being an artist is having the freedom to say what you want to say on the canvas.”

“Growing up [in the Philippines], it was kind of hard making friends. Nobody really wanted to hang out with me because they couldn't understand how hard it was for me to learn the language. Then I moved back here to the United States, and my parents stayed in the Philippines. Not having that foundation – I got into a lot of trouble. I was addicted to drugs. I was arrested several times. I was homeless at one point in my life. But what's crazy is that all that changed when I met my wife, and we had our first child. Everything. I started to take things more seriously. I went back to school and took up something I was really interested in, which is art.

“When I was going to art school at LACC, I met a professor, Alexandra Wiesenfeld. She was a huge inspiration to me and pushed me to improve my art. She was very encouraging, teaching me the ropes. She was always on my ass because she knew that I really had a talent for making art. That helped me push myself to go out and find galleries to show my art and also obtain grants like this one.”

When Edmund Arevalo first discovered he’d won the Not Real Art grant, he didn’t quite believe it. “It's funny because it was actually the last day to apply. I went through my archive paintings and thought – let me just try this, and I sent it in. Then I got an email saying I had won it. At first, I thought it was spam or something. But then, sure enough, I won and I was so excited.”

When asked how his past informs and influences his art today, Arevalo shared that his art is a “reflection of who I am and what I’m becoming. A lot of the personal reflection comes through in my artwork. I mainly tackle issues such as social justice, politics, and also the stigma of being a person of color. Yeah, that really impacted my art. I’m not a typical Filipino artist – they like to do portraits and they think art is about beauty. But to me, I look at art differently. Art doesn’t have to be beautiful to be art.”

Heavily influenced by hip hop culture, Arevalo says that it was “all he listened to growing up.” Other artistic influences include Kerry James Marshall, Damien Hirst, and multimedia artist, Mark Bradford. “He's talking about his culture [in] Los Angeles and where he grew up. Mixing that with his life and what he's been through – all that shows in his art. To me, that's beautiful.”

“Adding color is a big thing for me because I'm Filipino and the Filipinos are really colorful.”

Regarding his process, Edmund Arevalo says, “I approach my paintings by first gathering images. Then I take the essential parts of them and their components and break them down to their simplest form, and then add color. Adding color is a big thing for me because I'm Filipino and the Filipinos are really colorful. The food that we [eat] the colorful clothing that we wear, even the personalities of the Filipinos are very colorful, and so I try to portray that in my art. A lot of my work is figurative with somewhat of an abstract feeling to it. I'll paint very structured at first and then after I'm done painting it, I kind of, in a sense, destroy it. I'll make very bold gestures and marks on it.

“I recently painted a picture for Manny Pacquiao before his fight. I was trying to make it as perfect as possible and then I got kind of frustrated. And that's when I became very aggressive with the painting. I added a lot of brush marks and I sat back and looked at it. It made it so much more beautiful. So it was weird, the process of seeing how I'm trying to get it so perfect, but it doesn't have to be perfect. He really liked it. So that was pretty cool.”

Edmund Arevalo believes the key to monetizing his art is “all about the passion because whatever you're passionate about doing, eventually, it's going to blossom. You're going to grow from it. I feel like it also helps to be persistent. I’ve gone through the struggles in life – I've been to the bottom of the bottom. I already know what that is. That's what pushed me – and waking up every morning seeing my kids and my wife. I have to provide for them.”

Arevalo says his biggest fans are his wife and his two kids. “My wife is the biggest influence on me. She pushed me through all this even when I was going to school. She was working and taking care of the home and everything else. She’s the biggest part of me.”

Downtime is spent traveling whenever he can. “My wife works for Alaska Airlines and we get really good discounts. Traveling is a big thing for me. I like going to Hawaii, to the Philippines, and to Japan. Seeing all these different cultures has helped influence my art and inspires me, even more, when I get back home.”

Edmund Arevalo On The Best Thing About Being an Artist

“The best thing about being an artist is the freedom to say what you want to say on the canvas. Leave all your emotions and feelings on that canvas and use that to somehow impact someone else's life for the better or even sometimes for the worse. That is what I think being an artist is – being true to yourself.”