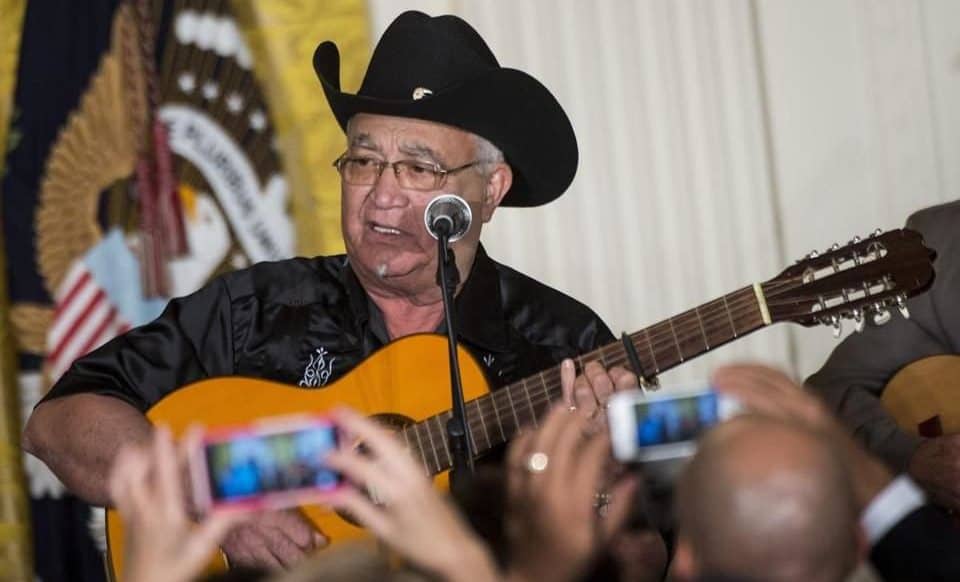 The Impulse to Create Lies at the Center of ‘Eliades Ochoa: From Cuba to the World’

“I’m glad to have been born with the desire to create,” says Eliades Ochoa early in Cynthia Biestek’s sonorous 2018 documentary exploring the life of the iconic Cuban guitarist.

Eliades Ochoa: From Cuba to the World reveals this desire came from his roots, specifically his parents, who encouraged his musical development from the beginning. At night, after a hard day’s work in the fields, Eliades’ father played guitar and the family sang together. Early on it was clear Eliades had an ear for music, so his father allowed the 6-year-old to practice on his guitar during the day while he was at work.

Watch the trailer for Eliades Ochoa: From Cuba to the World:

When there was enough money for a new tres guitar to replace his old beater, Eliades’ father opted instead to give it to his son—an act of generosity and love that reverberates throughout Eliades’ life and this 100-minute film.

We are immediately drawn into Eliades Ochoa’s story as he returns, now fully grown, to the hills and trails of his birthplace in present-day Songo La Maya. He is surrounded by a friendly swarm of admirers who remember him and his family. They also know he has become a national treasure and are clearly proud of his shared origins in their mountain village. He loves them back with hugs, kisses, warmth, and big laughs. There is joy and a lovely intimacy to these scenes.

When Eliades was around 10, his humble family moved from the isolated hills around Songo to the city of Santiago de Cuba and its rich musical landscape. His family passed along an essential feeling for music to young Eliades—essential like blood and breath—and although poverty kept him away from schooling and formal training, he persisted, undaunted and self- taught, earning his living by busking on the streets and playing for tips in bars and brothels.

Of Santiago de Cuba, legendary troubadour Sindo Garay declares, “I was born in this town, so ugly but so great!” in one of this film’s many archival clips that bubble with the peculiar beauty and joie de vivre of Cuba’s second largest city, home to many of Cuba’s most renowned poets, musicians, and storytellers. Coming up in the city, Ochoa learned to weave other genres into his traditional style. Afro-Cuban jazz, blues, pop music, and even rock ’n’ roll peek out from inside his solos, though he rarely ventures too far from the soulful “country” roots that ground him.

The film opens with Benicio del Toro comparing Ochoa to Johnny Cash. Surely this is about more than Ochoa’s shared affinity for black. When I think about how soulfully Cash covered Trent Reznor’s “Hurt” without dropping a dram of his own authentic spirit, the comparison holds up well.

Ochoa’s gift for interpreting poetry with the guitar follows a long line of troubadours with roots in Cuba’s Eastern provinces who chartered the trova style of music during the late 1800s. Small groups of these troubadours—called trovadores—have interpreted Cuba’s folk music traditions for over a century. Pablo Milanés, a founder of the progressive nueva trova genre, drills down further: “When I say la trova, I don’t mean old or the new trova. The Cuban trova as a whole is only one that has been developing over time. Each new trend is not a rupture, it links with the prior models.”

This connection to the past is at the heart of the trovador and of the music culture in Eastern Cuba. Fittingly, Santiago’s meeting place for trova musicians, La Casa de la Trova, became Ochoa’s second home. Of these years, the guitarist describes himself “as an outstanding student, but not a master yet because the real masters were those who left us the book from which we have learned once and again and always.”

Ochoa is an inviting figure in his guayabera and big grin, his eyes twinkling beneath his signature Stetson. He describes the son Cubano movement (literally “the Cuban sound”) as a “mighty magnet,” one that certainly attracted director Cynthia Biestek and her collaborators. Biestek treats her viewers like a fellow traveler. The images are lustrous (including many of the restored archival clips) and the camera is patient, letting moments unfold gently within the frame. The editing is also calm and unhurried, giving space for the words and music to ring out and hang in the air.

In the second act, we learn the story of Compay Segundo, an elderly trovador who faded from memory and many thought had died. In the ’80s Segundo had a chance meeting with Ochoa and they became collaborators. With Ochoa’s Patria Quartet playing accompaniment, the two recorded, toured, and created the classic song “Chan Chan.” Indeed, “Chan Chan” is a fulsome example of son Cubano’s magnetic power and a fine illustration of la trova’s continuity and inspiration across generations. It also brought Segundo and Ochoa mainstream international attention by way of The Buena Vista Social Club, who recorded a version of the song. In fact, Ochoa was and continues to be instrumental in lifting up his elders and generously introducing the world to the old and the new trova in equal measure.

While Ochoa found success abroad, Havana hadn’t yet fully embraced him. Even after The Buena Vista Social Club formed, Ochoa was not well-known nationally outside of Casa de la Trova in Santiago. His recording of “Píntate Los Labios Maria” changed that, finally bringing his music into the mainstream of Havana and expanding his legacy at home. The song permeated the national culture and received many honors at the 2000 Lucas Awards. In his words, “I earned our children’s love on a national level.”

In its third act, the film follows Ochoa as he collaborates with musicians from Mali to Mississippi, and plays concerts in Paris and Mexico City, where the soundcheck and concert footage made for a particularly vibrant sequence. Mexico is also where we’re treated to a charming scene with Ochoa autographing the inside of a taco truck for a grateful taquero and fan. Ochoa’s enthusiasm, humility, and love for music are apparent and infectious wherever he goes, and the camera frames these moments beautifully. Another standout sequence is Ochoa’s historic 2015 performance at the White House, hosted by long-time fan Barack Obama. The film acknowledges the politics of U.S./Cuba relations just enough to underscore the unique gravity and poignance of Ochoa’s invitation to D.C.

At the end, we circle back to the beginning, to Ochoa’s musical origins and family roots in Songo La Maya: “I believe that if I was born here, then here is where I must return,” he says. A satisfying bit of symmetry that includes a visit to the cemetery plot that will eventually be Ochoa’s final resting place, eliciting some wry humor and a toothy grin: “I realize many won’t come because it’s far away… many women wishing to offer me a flower will be absent!”

From Cuba to the World tracks Ochoa’s chronology in a steady, thoughtful, endearing way and the experience of watching it is much more than a history lesson. The songs are familiar to our ears somehow, our memory is jogged, even if we don’t exactly know how it is we already know them. There’s a kind of deja-vu quality with each recounting of each step along Ochoa’s path, as his authentic voice and playing style become more defined and identifiable. This is a well-told story that feels, in many ways, both idiosyncratic and universal at the same time, like noticing surprising new details in the landscape on a return trip home. By the end, we share Ochoa’s gladness he was born with the desire to create, and we are deeply grateful for his musical life.

Stream Eliades Ochoa: From Cuba to the World on PBS.

Hans Fjellestad is a filmmaker, musician, and teacher in Los Angeles. Visit his website and view his work here.