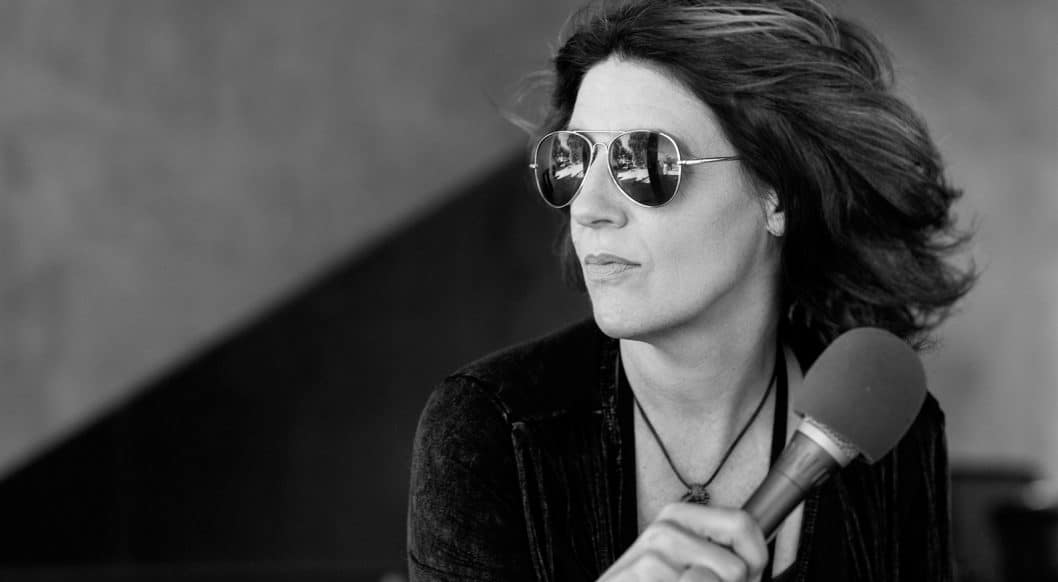 Frances Anderton is the producer and host of KCRW’s DnA: Design and Architecture, a weekly radio show that explores Los Angeles’ architecture, bringing “design alive with stories of how it shapes lives, in LA and beyond.” She is also a frequent public speaker and moderator, the author of You Are Here and several other books on architecture and design, as well as an art and exhibition curator.

Ironically, we start with Anderton’s plethora of career accomplishments, because in the UK, where Anderton grew up, it’s considered impolite to begin a conversation with, “So tell me what you do.” Yet in Los Angeles, Anderton’s home for more than 28 years now, it’s a given.

“One would tend to start conversations in the UK with more, ‘What are you interested in?’ says Anderton. “Or, ‘What are you reading’ or talking about music or something. I'm trying to remember exactly how conversations started, but they didn't typically start with ‘what do you do?’ It was fascinating to me to move to L.A. and find that that was the first question.”

Frances Anderton is also a wife, a mother, and an avid cyclist, often pedaling to the office rather than navigating through the city by car, allowing her the opportunity to be a part of a city whose pulse she’s been courting since her first visit in 1987.

As a young editor of Architectural Review and graduate of the Bartlett at University College London, Anderton wasn’t always taken seriously by her peers, so when she arrived in L.A. on assignment and was treated with an earned respect, she was pleased.

“I was in my early 20s. I was barely out of college and I had an editorial position at this magazine. I was treated as a young thing who should be pretty much seen and not heard. I'm slightly exaggerating because they did put me on the plane to L.A. but generally, I was seen as a new and junior member and female to boot, because the main people at the magazine happened to be all male.

Anderton recalls the plane ride over from England

“It felt very exciting and also, there was trepidation because I'd never been to L.A. I had only been to America once to New York, and I absolutely loved New York, but I had zero real understanding of L.A. I didn't have a lot of time to prepare and found myself on the longest flight I'd ever done and sort of rushing to try and study up on L.A.”

In direct comparison to how twenty-somethings of this generation might pass the time on a long flight from London to Los Angeles, Anderton used the time to read up on L.A.’s planning and architecture, reading Less Than Zero by Bret Easton Ellis and Los Angeles: The Architecture of Four Ecologies by Reyner Banham, whose book description reads, “Reyner Banham examined the built environment of Los Angeles in a way no architectural historian before him had done, looking with fresh eyes at its manifestations of popular taste and industrial ingenuity, as well as its more traditional modes of residential and commercial building. His construct of four ecologies examined the ways Angelenos relate to the beach, the freeways, the flatlands, and the foothills.”

Frances Anderton’s first impression of L.A. was that it was, “very weird. L.A. was less dense. It did not have the mass transit; it was very much a strange driving city in the late 1980s. I found myself encountering a lot of people who I think also thought the place was strange – but strange in a really interesting, creative, and stimulating way.

“There was lots of excitement about the freedom for designers and architects and a sense of L.A. being a kind of well-kept secret because from outside, L.A. was seen as Hollywood with enormous amounts of concrete and freeways. Those were the perceptions. And then I met all these people who had these little design offices tucked away in warehouses and we were just having a great time. I mean, a lot of people were like myself. They'd come from other cities and were also on an adventure in L.A. There was definitely a kind of a community of people finding themselves in Los Angeles and sort of figuring it out.”

“I lived in a household that was constantly changing its environment.”

Anderton’s interest in architecture began in her early childhood. Her father, a self-taught builder and designer had a habit of buying houses, “stripping them back, and as soon as the house was finished and perfect, he would get bored and move on to the next one. We moved every two years. So I grew up around architecture. Essentially, I lived in a household that was constantly changing its environment.”

In high school, Anderton found a passion for art, but also found herself drawn to sketching buildings, describing the transition as “a vague seeping in that I was interested in architecture. But I went to an all-girls school and the idea of architecture as a profession was literally never mentioned – and this was a very good school, not a rubbish school. When I did mention architecture one time, I think it was dismissed by a teacher who said I wasn't good enough at math. So I just sort of thought, ‘Oh, that's the deal – architecture involves the ability to draw, plus math,’ and I wasn't great at math, so I put the idea out of my mind.”

But architecture found its way into her life again during a gap year spent in Florence, Italy, where she worked on the redecoration of a house. “I wound up painting a farmhouse and spending more time sort of back on buildings. I decided that perhaps I was interested in architecture. Then I got back to the UK and went to college and found myself in this art history class and realized that I really didn't want to be just doing that sort of theory. I actually wanted to be designing, so I transferred over to architecture school.”

“I didn’t want to be living in the history books.”

“Florence is all incredibly beautiful old buildings. But the building that truly stimulated me, and maybe had some kind of impact on my thinking, was seeing the Pompidou Centre in Paris when I was in my early teens. I'd grown up in a city called Bath, which was neoclassical architecture, very old. And then I spent all that time in Florence, so I'd spent 18 years of my life surrounded by very old buildings. Then subsequently, I came to L.A. and saw what people were doing – so very different from the Pompidou Centre– completely contemporary. I fell in love with contemporary architecture. I think that was another reason why I gave up on art history. I didn't want to be living in the history books.”

When asked what impresses or inspires her the most about a city, Anderton shared, “Well, there's architecture and then there's the city itself and getting around the city, and the parks and all the things that make up the city. I do absolutely love New York. I think New York is an amazing city. I think for a city of skyscrapers, it's got to be the best there is. I think that has to do with all sorts of contributory factors like the date when New York's towers skyscrapers originated, so they started to define the shape. Back then they had rules where you could put up skyscrapers and so that sort of set the tone, the framework. Then the fact that it's an island surrounded by water and the water gives this kind of bliss – the sun playing off of the water makes this amazing light. Then, you have the grid that crosses the island and whichever way you look, you've got these horizons…It's got a very strong character. I like distinct character.

“L.A. had a distinct character when I came here in the late 80s, exceedingly different from New York. Its character was formed by this car-based city, basically, this kind of semi-suburban model of development overlaid on mountains. A city with mountains and an ocean, and then Hollywood, and you stir that all up, and you get a place that has an exceedingly distinct character. Though the kind of L.A. land use is not sustainable, it just isn't. Nonetheless, for its decades of existence in the 20th century, it did create a very distinct place. I kind of wonder if it's holding on to that distinct place as it now evolves and transitions into a sort of hybrid.

“San Francisco is also a totally gorgeous city, also in part because it has a very distinct character. A bit Victorian and quite lovely. It also has that relationship with the landscape. I definitely think the landscape defines cities. The city will interrelate with its geography and the great cities have a really interesting relationship to their geography.”

A typical day in Anderton’s life starts and ends at home with her 15-year-old daughter and husband, “whom I hang out with because I actually love both of them and really love their company.” During the work day, Anderton shared that multitasking short and long-term deadlines; meetings, managing a steady stream of emails, the DnA show, and breaking news around architecture and land use can get chaotic. “Things are a moving target, interwoven with some fixed deadlines like a show that must go on air at 1:30 on Tuesdays, no ifs, ands, or buts…Sometimes I do feel as if the multitasking is just going to spin out of control.”

When asked about her inner critical voice and how she manages it, Anderton shared, “I've definitely had a hell of a lot of imposter syndrome, if that's what you mean. I probably still do, but my genuine interest in this topic and my genuine affection for people in the design and architecture community who are solving problems and going through the world inspired and curious, that just sort of outweighs it. I just keep on going, which I think I've witnessed with some of my excellent colleagues. I've learned – seeing people out there in the world. You just keep on trucking.”

The most important thing is…

“Passion…going through life with enthusiasm and obsession…a genuine authenticity. And, hopefully, contributing positively to the world through what you know.”