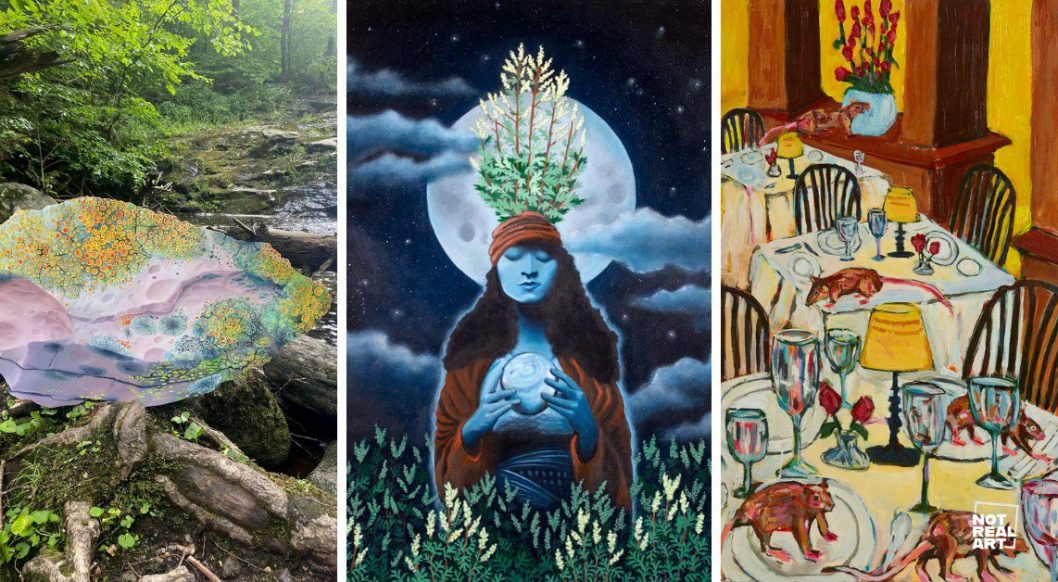 The reality of our current environment—rising sea levels, drought and insect outbreaks, and extended wildfire seasons—is bound to have an impact on art and popular culture. Contemporary artists, museums, and galleries work across mediums to raise public consciousness about the dangers posed by climate change through eco-conscious and green art.

More than ever, artists are making us aware of our impact on the environment, encouraging us to work towards balancing our concept of give and take.

Today, in acknowledgment of Earth Day 2022, we’re featuring five amazing artists who use their work to challenge preconceived notions about our role in the environment's health. Exploring everything from climate anxiety to the life cycle of vulnerable ecosystems, these artists remind us we’re all responsible, in one way or another, for the place we call home.

These contemporary artists raise environmental awareness with their eco-conscious and green art.

It’s easy to complain about the morning commute to work, but we often overlook the road it took to get us there in the first place. In his latest series, Nine to Five, Ian Robertson-Salt, who also goes by the pseudonym Anthroe, explores the relationship between society and the natural environment through the eyes of LA’s working class.

“Growing up in Los Angeles, I was exposed to many different cultures, ideologies, and socio-economic issues that have fueled my creative exploration,” Robertson-Salt explains. “The exploration of contemporary issues surrounding sustainability, poverty, intimacy, history, and identity are the driving forces of my practice.”

Dark but never dour, Erica Peebus’ recent paintings dissolve the boundaries between plants and humans with magical realism. Blessed with a lingering interest in herbalism, Peebus illustrates the symbiotic relationship between herself and the natural world, painting a gallery’s worth of medicinal folklore and tea cabinet staples: stinging nettle, dainty chamomile buds, and pain-relieving bleeding heart flowers.

Painted in a didactic style reminiscent of scientific field studies, Peebus’ work reflects her love of research, knowledge, and documentation. “This series of paintings has been a pursuit of awareness into the world of plant spirits and the unseen forces that exist in and beyond the natural world,” Peebus writes. With lunar phases and seasonal cycles as an influence, Peebus exposes the underlying rhythm of life on planet Earth. Despite the scientific influence, her work is deeply personal—Peebus compares herself to the misunderstood dandelion, a medicinal plant loaded with antioxidants. “Drink its tea to increase your psychic awareness, and make a wish before blowing its seeds,” the artist recommends.

Learn more about the artist: Herbal Folklore: Erica Peebus Spies Myth and Magic in the Garden

Gravity can’t tether Elena Soterakis’ eco-conscious artworks to Earth. As an artist and founding member of Beyond Earth, “a woman-led transdisciplinary artist collective that explores the frontiers of art, space, and biology,” Soterakis creates and sends multiple pieces of her artwork into space. Bon Voyage!

Using a blend of scientific and artistic research, Soterakis and her collaborators prep their digitized artworks for orbit by storing them in encoded DNA sequences. To Space, From Earth—a recent Beyond Earth project aboard the International Space Station—includes Soterakis’ painting, “Better Morrow, a work also included in the artist’s ongoing Ecocide series. Referring to the Earth as “she” in the series’ artist statement, Soterakis views the planet as a “living, breathing, sentient being.” The artist compares the destruction of this sentient being to homicide, titling her four-part series in homage to the Earth’s deliberate murder by way of pollution. Included here, Ecocide I comments on “unchecked consumerism, corporatism, and extractive industries.”

Growing up, Tommy Mavra’s family relied on fishing and farming to make ends meet. The first-generation American artist now lives in Philadelphia where he creates narrative-based works that question man’s role in the natural world.

Mavra’s upbringing gave him deep appreciation for the inherent balance between organisms and their ecosystems. In his work, the artist investigates how humans fit into that balance by reassessing our ever-evolving survival strategies. “Technology, medicine, housing, farming […] are thought of as being artificial, yet they support the survival of our species,” he writes in his artist statement. “No other animal has had the same impact on the ecosystem that we do. In the long term, it seems that our inventions, intended to ensure our success, could usher in the end of most life on Earth.”

Learn more about the artist: Artist Tommy Mavra Imagines What the World Would Look Like Without Humans

“How fully can we understand a cloud, a tree, or a rock?,” interdisciplinary artist Ashley Eliza Williams asks. Based in Massachusetts, the amateur ecologist paints biomorphic shapes that seem to vibrate with life.

Williams’ work is consumed with the process of understanding. We see her biomorphic shapes—sometimes resembling stones, sometimes flesh—from every angle. When they float in midair, Williams positions our gaze just low enough to see underneath, a vantage point usually hidden from or inaccessible to human eyes. “When I walk in nature, I explore the insides of things,” she explains. “The furtive organisms found under rocks, the fungi living between tree roots, and the bright patterns of insect eggs within a rotting branch.”