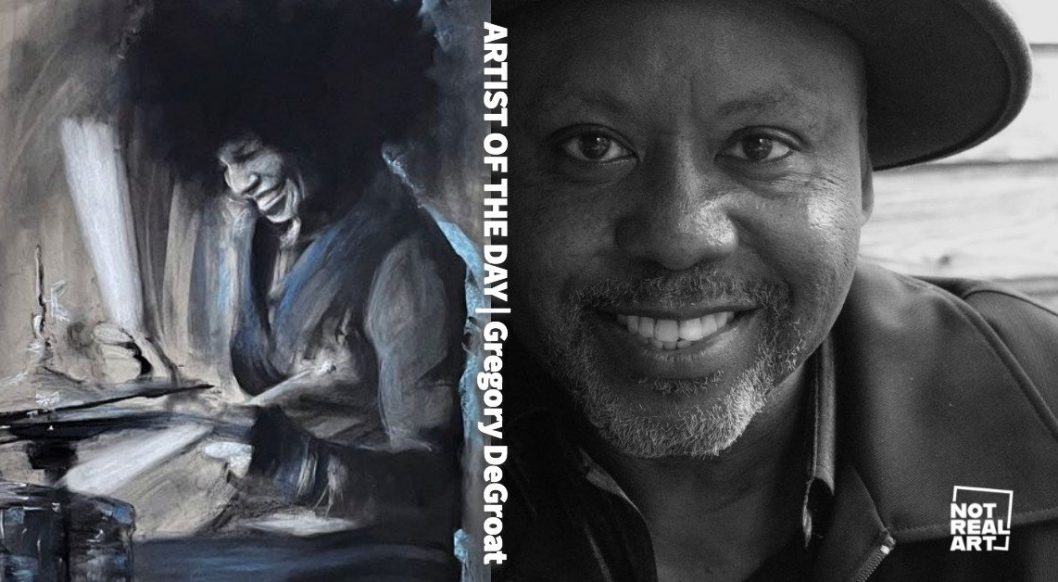 Ohio-based artist Gregory DeGroat sang in gospel groups, fronted bands, and worked for the railroad before shifting to art and design. He was hired after college by the Dayton Daily News as a graphic artist and promoted to full-time creative positions. His expressive drawings of musicians in charcoal and pastel, including a portrait of his cousin, jazz drummer Cindy Blackman, have the insider feel of someone who has performed onstage himself.

DeGroat’s adopted father was an Army illustrator, and his mother sang and played piano for church choirs. He started drawing when he was four and followed through with a degree from the Columbus College of Art and Design. After years in advertising and commercial illustration, he decided to combine his freelance graphic design work with fine art. His father, who passed away from a seizure when DeGroat was at home alone with him as a teenager, was a major influence on his creative development.

Dad was a renegade, an activist, and civically-minded artist. He was the kind of guy who would take off from Springfield, Ohio, to Greenwich Village and mingle with the bohemians at the drop of a hat. His paintings were sensitive, primitive, and civil rights-oriented. Dad wasn't concerned with design, form, or execution in general. He just fearlessly did his thing. He legally adopted me at the age of two after marrying my mom. She said I called him "Danny" (his first name). Promptly, he started teaching me to draw and paint. He would assign lessons I had to do throughout my youth before I was allowed outside to play. The funny thing is, as he became "daddy," I forgot I ever called him "Danny." I began assuming he was my blood father and that I had inherited his artistic abilities.

DeGroat’s road to success was not without obstacles. After being told by two of his instructors in college that he would never make it as an illustrator, he defied their predictions and had his work regularly published in the Dayton Daily News. His goal is to ‘create powerful, bold, evocative, ethnically-oriented artwork’ that depicts his subjects in an ‘intelligent, heartfelt, and dignified manner.’ As DeGroat carries on the legacy of the man who became his creative mentor, he hopes to do his father proud.

Objectives: To solve the graphic design needs of my clients in a competent, creative, and timely manner, and pour everything into making bold, interesting, realistic artwork that the viewer connects with on an emotional level.

This one is cool because if you check my Instagram, you'll see where she gave me a shoutout!

Born in Springfield, Ohio, I experienced an “artsy” upbringing. My father was an illustrator in the Air Force — and a renaissance man of sorts. He had a local reputation as a sign painter, architect, portrait painter, and athlete. He had me catching softballs and drawing portraits by the time I was 4. My mom sang and played piano in her church choir, and she taught me to sing in harmony (although I passed on the piano, which is where my brother excels). My sister drew, sang, and has exquisite taste in interior design.

In time though, I grew more artistic than athletic and sang in gospel groups and choirs and fronted many bands, including one in Iceland during an Air Force assignment. The drawing was great, but it took a back seat to music during most of my 20s. That all changed in an instant while laboring for the DT&I Railroad one day while helping to rip out an old railroad track with a pick axe (in sweltering heat). Singing wasn’t paying the bills, and railroad work was excruciating. That’s when I decided to try my hand in graphic art and design.

I earned an Associates' degree in Commercial Art and was hired out of the Columbus College of Art and Design by the Dayton Daily News Marketing Department as a part-time graphic artist. Over the years, I was promoted to full-time positions in the Advertising and Editorial Art departments. Currently, I’m pursuing what has long been a goal of mine by producing freelance graphic design along with fine art. My vision and goals are to create functional, high-quality images for reproduction and/or exhibit.

Meeting that goal fuels my day, and I love everything about it, especially its challenges. Nothing compares to coming up with solutions to artistic problems.

Gregory on the Web And Social Media

Here is where to find out more about Gregory DeGroat on the web and social media: