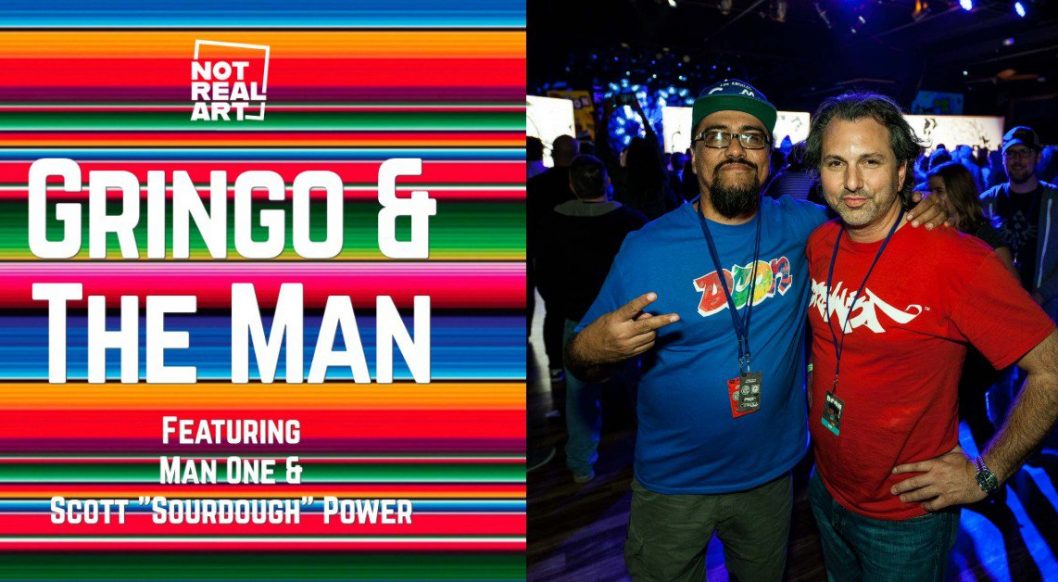 Gringo & The Man: Artists Sourdough and Man One Make History in Race Relations

In this special episode of the NOT REAL ART podcast, our original co-host, artist Man One, is back to launch our new segment with Scott “Sourdough” Power called Gringo & The Man. Now, for the first time in podcast history, you can hear a middle-aged white dude and an O.G. Latino graffiti artist talk about living in a world gone loco!

The premiere of Gringo & The Man takes NOT REAL ART back to its roots, to a time when Sourdough & Man One just hung out, talking about whatever they want on the podcast, and having a good time.

Nothing is off-limits with Gringo & The Man!

GenXers from Chicago and L.A. respectively, Gringo (aka Scott “Sourdough” Power ) & The Man (aka Man One) bring their devil-may-care attitude to discussing contemporary culture. Long time friends, Sourdough and Man One’s banter is what you'd expect from two dudes who grew up in The Eighties. (Warning: Gringo & The Man may not be appropriate for those easily triggered.)

In this first episode, the dos amigos discuss the curious name of their segment and wonder if anyone will understand the cultural reference. Man One shares more about gringos in Mexico and tells some hilarious stories from Spring Break. Then, they dive into Man One’s quest for an assistant or intern, and he talks about some of the character traits he looks for in those who help him. The wide-ranging conversation also touches on raising kids, the drawbacks of technology, and more of Man One’s tales from Mexico. We are so excited about this new project, so tune in today to hear it all!