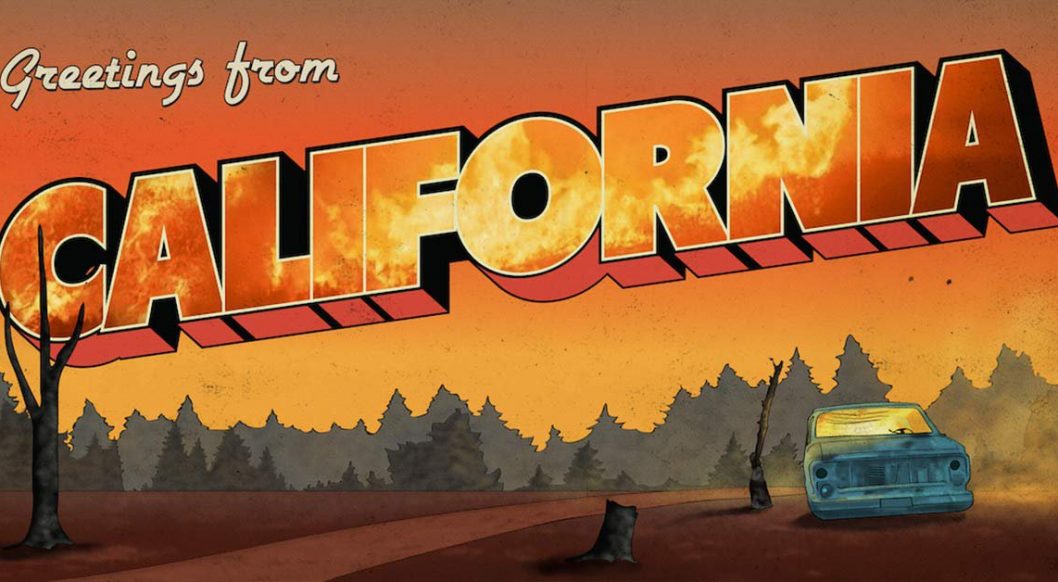 “What is wrong with our politicians?” pop artist and activist Hannah Rothstein asks, echoing a question on the tips of many American tongues. “With […] plenty of unshakably clear evidence that climate change is making the Earth vastly less habitable—how can they continue to drag their feet on combating climate change?”

Incredulous and outraged, Hannah designed 50 States of Change, a series of postcards released in partnership with Greenpeace USA that illustrates the effects of climate change on each state. Painting climate change as a contemporary problem that demands immediate attention, Hannah details the natural disasters currently terrorizing the US. “Greetings From California” gives viewers a taste of the West Coast fire season, while Arizona’s already dry terrain cracks under severe drought. Michigan’s lakes are a sickly shade of green, frothy with toxic algal blooms, while coastal states like Delaware sink under warm Atlantic waters.

Intended to help viewers vent their environmental frustrations, Hannah’s postcards are designed to spur guerilla activism online. “Share an image of your state’s postcard on social media,” she says, encouraging her audience to tag government officials.” “We can lessen, reverse, and prevent many of the issues depicted in 50 States of Change, but we need to act now. “It’s time to demand change. Be loud. Be angry.”

Hannah designed her postcards with the internet in mind, perfecting a signature graphic style that stands out during a quick scroll. The designs reference vintage travel postcards and use dark humor to spread the message of impending doom. “I'm interested in finding ways to use the power of art and the internet to galvanize people and create lasting, impactful change,” she tells NOT REAL ART.

The option to post your state’s postcard online helps deliver Hannah’s message with the speed required to mitigate climate change. (If you need a reminder of our dire situation, check out NASA’s vital signs of the planet). “Don’t let elected officials sleep until they get their act together on this issue,” Hannah says, including directions for those who want to get involved: after posting on social media, tag President Biden and state representatives, demanding they take executive action to combat climate change across the country. “Don’t forget to tag @GreenpeaceUSA and @HRothsteinArt!” she adds.

Sharing her ultimately optimistic view on environmental activism, Hannah adds, “The more voices we have speaking out, the harder we are to ignore, and the quicker we’ll see the impact needed to preserve this planet for ourselves, our children and grandchildren, and generations to come.”