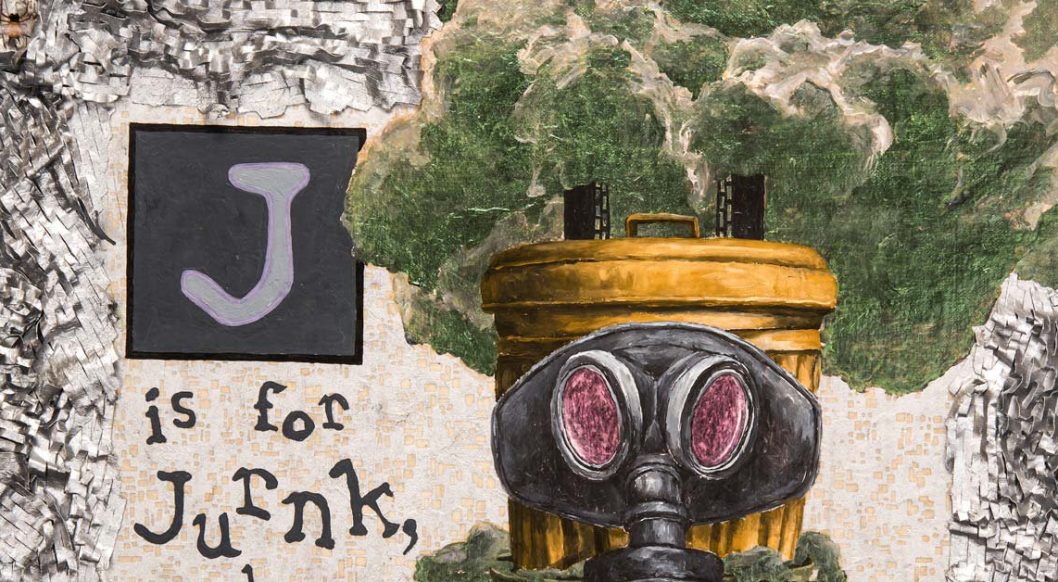 ‘M’ is for Monster: Heidi Brueckner and Her Sleazy Creatures Teach the ABCs

“A is for Ahlmee, the first of our creeps. B is for Bumbreth who swallows down heaps,” goes the couplet scrawled on Heidi Brueckner’s pair of alphabetic paintings, “Ahlmee” and “Bumbreth.”

The Oakland, California-based creator developed her Monsterbet series of satirical mixed-media paintings to poke fun at traditional children’s alphabet books and pick apart human nature. “Each letter of the alphabet stands for an invented monster that has a particular quirk,” Heidi explains. “Every two paintings form a rhyming couplet.” The series of cultural allegory paintings became the Monsterbet book, which is available for purchase on Etsy, Amazon, and Heidi’s website. With sanguine eyes peeking from patterned backgrounds, Heidi introduces beasts that satirize human traits. “Often the figures personify the precarious, dark, and sleazy side of human nature, subjects by which I am continually fascinated,” Heidi says in her artist statement.

Rendered in a grim, grotesque style, Heidi’s work is influenced by a study abroad trip to Germany, where the country’s revolutionary 20th-century artworks left a lasting impression. “These topics seem to require […] frontal, discomforting, and intrusive compositions,” Heidi says of her work, which is cast in murky shadows, similar to George Grosz’s paintings. “I revel in playing with bright color and pattern, tilted and flattened space, and distorted form in order to achieve this needed psychological expression […], but also to create an element of humor and fun.”

Though Heidi plays on the innocent, educational format of a children’s alphabet book, she puts a Tim Burton-esque spin on the characters and their coinciding rhymes. She says, “The subject may be a bit […] childlike, but I still strive to keep a gritty edge in the work.” The grit comes in the form of exploring “some of [her] favored themes of human vice, morality, and fear.”

“Often the figures personify the precarious, dark, and sleazy side of human nature, subjects by which I am continually fascinated.” — Heidi Brueckner