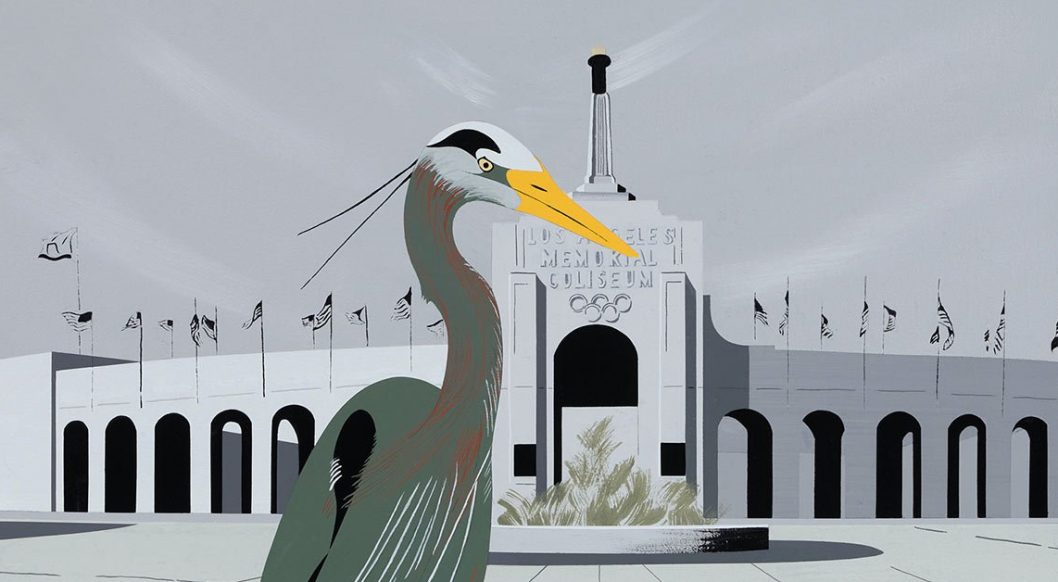 Imagine strolling out of your local 7-Eleven, slurping on a Big Gulp, and running smack dab into the furry end of a California grizzly bear. Yikes.

Los Angeles native Hilary Baker illustrates this startling scenario in the aptly titled “7-Eleven,” part of the artist’s razor-sharp Predators series. Painted with creamy acrylics, Predators plops California wildlife unceremoniously into cityscapes, oil fields, and farmland as commentary on human-caused habitat destruction. “From a group of common pigeons to an elusive cougar, my subjects make themselves at home in urban locales inspired by Los Angeles landmarks, past and present,” Hilary writes in her artist statement.

Exacerbated by population growth and competition for natural resources, the conflict between wildlife and human habitats takes center stage in Predators. Navigating foreign terrain, a family of possums scuttle along the Art Deco-inspired Figueroa Street Tunnels, while a coyote prowls the parking lot of a Cadillac dealership. Now neighbors with movie stars and record producers, the once formidable creatures in Hilary’s work are displaced and existentially adrift in their new habitats. “Their gaze is oblique, their confrontation with the viewer unflinching, and their presence—like the past—uncompromising,” she says of her Predators portraits.

Imbued with storybook charm, the creatures in Predators appear almost human, echoing 21st-century anxieties surrounding immigration, urban crowding, and environmental displacement. “It might be argued that these mostly nocturnal creatures serve as stand-ins for any city resident attempting to co-exist with a disappearing homeland,” Hilary explains, drawing a direct line between human and animal wellbeing.

If you’re in the area, Wildlife on the Edge: Hilary Baker is on view at the Wildling Museum of Art & Nature in Solvang, CA, through March 6, 2023. The exhibition includes work from Predators alongside a new series of animal portraits on birch wood. Accompanying the exhibition, the book Hilary Baker: Predators and Other L.A. Stories is available for purchase through the Wildling Museum, by emailing Hilary directly, or here.

“It might be argued that these mostly nocturnal creatures serve as stand-ins for any city resident attempting to co-exist with a disappearing homeland.” — Hilary Baker