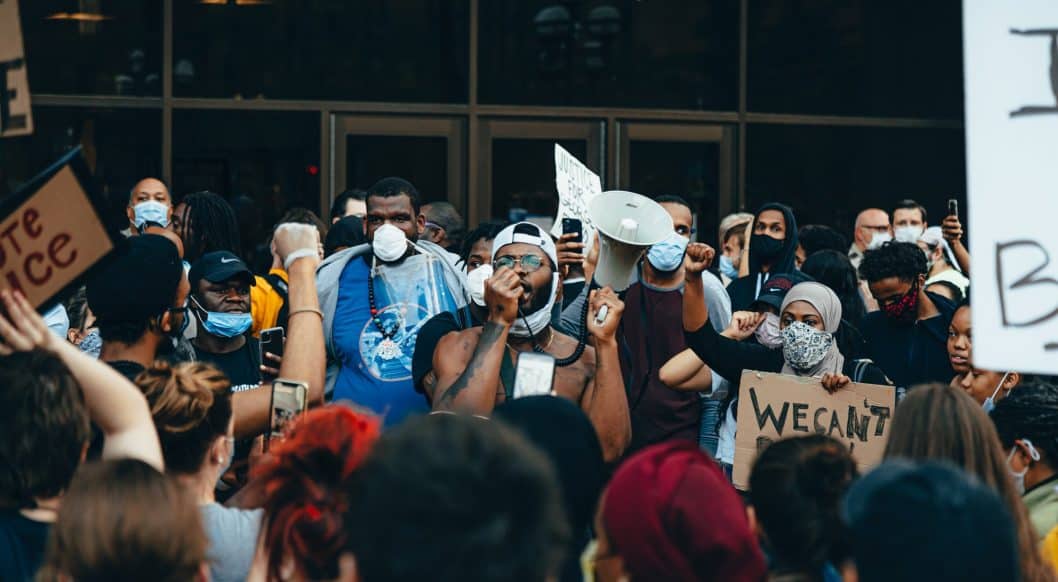 Taking It To The Streets: How To Handle Trouble with The Police as a Protester

My function here is to write about the arts and the law. It is to provide artists who make up the primary audience on this platform with helpful information on the kinds of legal issues they may run into during their practice.

Two developments, the Covid pandemic and the police murder of George Floyd (and other black men and women) interrupt us all and distract us from our focus in the arts. Those of us living in America are watching its leadership dis-assemble and its values trampled by federal and local authorities.

It seems completely appropriate to me for everyone’s focus to be disrupted with a reassessment of each of our personal roles in correcting inequities, in changing the behaviors of virulent and endemic racism in our society and in our culture. Most urgently (and this is a matter of law and of survival) we must radically reform the police forces.

I’ve been called for jury duty a number of times and three of those times were for criminal cases. They give you a questionnaire so the lawyers and the Judge can review if you have any obvious biases before putting you on the actual jury. One of the common questions asks if you trust police officers and, if not, why.

My response has been uniform (no pun intended but, groan) although the words I used may have been different: “Almost all of the people who decide to join a police force have the very best intentions to serve and if necessary protect other people. Unfortunately, urban police forces, in general, train their officers to be part of a domestic paramilitary organization in which the people in the city are designated as opponents, at best, and as the enemy in the worst case. Their function as officers is to “take down” people who they suspect of wrongdoing. I believe to accomplish that mission they are likely not to provide fully truthful testimony to the Court.”

And this is the remarkable thing. They don’t automatically take me out of the jury pool for saying that because, I suspect, they can see the truth in it. I haven’t ever been seated on a jury more because I am a lawyer, clearly liberal and also a professor seen as capable of shifting the opinions of others. I wouldn’t want me on a jury either.

I write this with the news today that with the protest marches taking place across the country Trump’s secretary of defense was put on a call with all 50 governors and described their cites and towns as “the battlespace” that must be “dominated” so that “we can return to the right normal.” This while Trump has amassed the real army, not the National Guard but the famed 82nd Airborne, right outside Washington D.C. presumably in case he and Melania need to get dug out of his bunker.

What To Do If You Run Into Trouble As A Protester

Artists have always contributed to protest and revolt in ways that capture the dialogue and propel people forward. But Artists may need to do things now as protest that maybe they don’t see as art. So what follows are links to guides prepared by good, solid sources about what to do if you run into trouble as a protester:

Gain access to more great content from Joshua Wattles and other with industry professionals, artists and creatives.

Join To Get Our Newsletter

Joshua S. Wattles has a distinguished decades-long career as an attorney, business executive and law professor in the entertainment, communications and technology sectors. Most recently, he was Advisor-in-Chief to DeviantArt.com, an online community for visual artists and their user-generated content ranked by traffic as one of the top 150 websites in the world, where he spearheaded its successful multi-million dollar acquisition by Wix.com (NASDAQ). Mr. Wattles has a varied career as a lawyer, executive and academic in the film, television, music, visual art, Internet and technology fields. He was the deputy and acting general counsel of Paramount Pictures. At Paramount, where he worked for eleven years starting in 1981, he was responsible for the studio’s highest profile talent and content agreements as well as major litigations. He advised the Chairman and all division Presidents on legal matters and managed the more than 60 lawyers operating throughout the company. His litigation experience includes managing the infamous Art Buchwald “net profits” case brought against Paramount on the film “Coming to America.” He was also the senior intellectual property lawyer for Paramount Communications advising film, book publishing, sports and cable television units and was a key architect of the film industry’s anti-piracy programs in the transition to videocassettes. With executives at Universal Pictures, he created the industry’s collective licensing organization for cable and satellite retransmissions of television programs and films in the EU. Josh Wattles’ background in the music industry began right out of law school as an in-house litigator for the American Society of Composers Authors and Publishers (ASCAP) where he worked on the first Copyright Royalty Tribunal proceedings in the United States. At Paramount, concurrently with his legal positions, he ran all of its music operations including the production of soundtracks and its significant music publishing interests, The Famous Music Publishing Companies. He acquired the Duke Ellington catalog and doubled the gross and net revenues of the publishing companies. He helped create the business and legal structure for the modern film soundtrack with the groundbreaking contributions of Flashdance, Footloose, Beverly Hills Cop, Top Gun and numerous others. He shared responsibility for breaking the longest running number 1 single in history, End of the Road, by Boyz 2 Men. After twelve years at the studio, Mr. Wattles became involved in a number of early-stage Internet ventures. He is the founding President of Mixonic.com, an on-line CD and DVD replication company, sold last year to a long time competitor, and he designed and developed the strategy and technology for the most disruptive play the ringtone space, Xingtone, subsequently funded and acquired by Siemens AG. His association with DeviantArt as its chief business and legal advisor began as a pro bono project at the very beginning of the website’s launch 18 years ago. Hejoined DeviantArt full time nine years ago. In his private legal practice, Mr. Wattles was of counsel most recently to Bingham, McCutchen, then a large international firm. His clients over the years include major studios, such as MGM, Fox and Televisa as well as prominent artists including J.K.Rowling, the author and creator of Harry Potter. He participated in MGM v. Grokster, an attack on open Internet distribution of content which progressed to the United States Supreme Court, in which he represented the opposite side to the entertainment industry as counsel to LimeWire and to the developers of the Gnutella protocols who appeared together as amicus. He also represented Michael Robertson, a prominent technology entrepreneur, in copyright litigations with the music industry. He was the lead entertainment and copyright lawyer on Televisa’s litigation team in a significant contract and copyright case against Univision that went to trial in Los Angeles. Mr. Wattles is a Lecturer in Law in Advanced Copyright at USC’s Gould School of Law and previously taught, as an adjunct, the copyright course at Southwestern University Law School and at Loyola Law School in Los Angeles. He has also taught full courses in Entertainment Law, in Art Law and in Music Publishing Law. He continues to lecture and speak at many other schools and professional organizations, most recently as an invited panelist at the ABA 33rd Annual Intellectual Law Conference held in Arlington, VA. His presentation on Fan Art Law at Comic Con International has over 180,000 views on YouTube. He is past President of the Los Angeles Copyright Society. Before attending law school and as an activist artist, he was co-founder of one of the very first programs providing legal services to artists, Bay Area Lawyers for the Arts, which morphed into Volunteer Lawyers for the Arts. Mr. Wattles’ law degree is from George Washington University Law School. He received his bachelor’s degree from Mills College in Oakland, California, cum laude, in American Studies, where he was Phi Beta Kappa and is still distinguished as the only male ever awarded an undergraduate degree by the college.  Mr. Wattles also attended the University of California, Berkeley.  He is admitted to practice to the Bars of California (active) and New York (inactive). Contact: Joshua Wattles joshuawattles@gmail.com