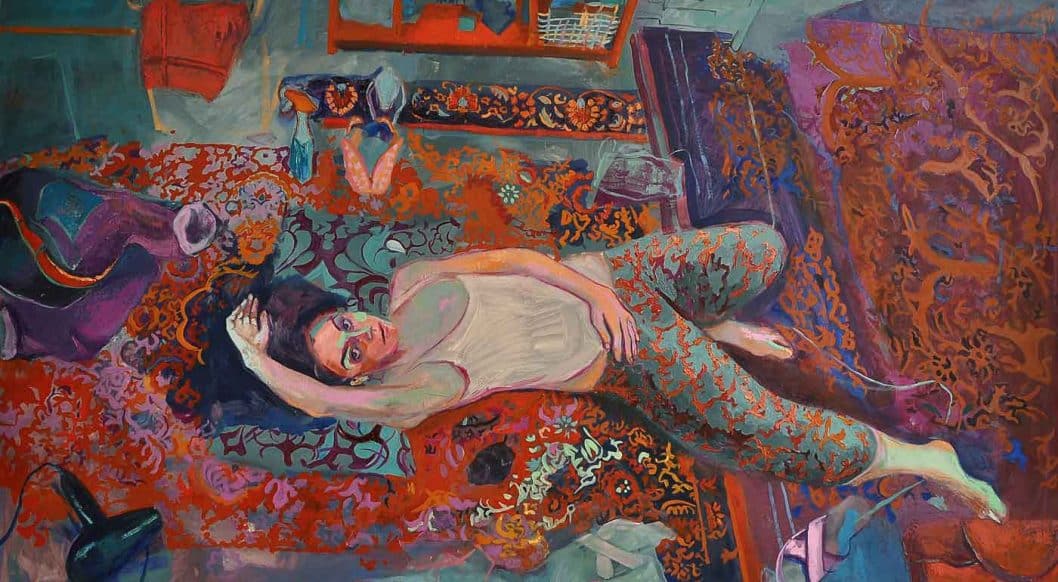 Awash with rich color, Shabnam’s Jannesari’s large-scale oil paintings illustrate clandestine spaces for women to gather in secret. In dark, richly decorated rooms, the Iranian artist and her female compatriots evade the patriarchal power structures that rob them of their freedom.

Now based in Massachusetts and pursuing an MFA, Jannesari draws on her own experiences growing up in Iran. Although deeply personal, her work casts a wide net, reflecting on the rampant injustices suffered by other Iranian women under the current law. “Iranian patriarchal society censors female independence,” Jannesari writes in her artist statement, pointing to the hijab as symbolic of that censorship. “Those who ascribe to cultural religious prescription believe that women’s hair attracts men, and that a woman’s body spawns temptation and guilt,” she continues.

Prior to the 1979 Iranian Revolution, headscarves were banned, then actively discouraged. After the Revolution, women lost the right to divorce their husbands and were required to cover their hair in public as an expression of modesty. Jannesari explores this complicated dynamic by scattering her domestic interiors with colorful plastic curlers, hair dryers, and unspooled hair. Decorative textiles give her interiors an insular feel, one that welcomes women to express themselves without fear of consequence.

To counter that fear, Jannesari explores the notion of heterotopic space, a concept developed by philosopher Michael Foucault. Heterotopic spaces are isolated communities that both mirror the outside world and distinguish themselves from it. Prisons, brothels, and ships are all examples of heterotopic space that offer room for social deviance and escape from authoritarianism. On this particular aspect of her work, Jannesari notes, “The versatility of heterotopic spaces allows me to construct an ideal world outside of convention—a special and secret space, which exists in stark contrast with Iranian reality.”

Shabnam Jannesari discusses the psychological aspects of color, the complex realities of Iranian female identity, and the power of painter Alice Neel.

Shabnam Jannesari: Jennifer Packer is an amazing artist who I admire. The artist makes skin color secondary to the psychological aspects of her sitters—her use of soft hues of yellow, ochre, red, and mauve express an intimate emotional sensitivity even when the figure is doing something as mundane as hanging out on a couch in their apartment. In her compositions the eye contact engages the viewer. Packer’s paintings are rendered in loose line and brush stroke using a limited color palette, often to the extent that her subject merges with or retreats into the background. Suggesting an emotional and psychological depth, her work is enigmatic, avoiding a straightforward reading.

The other artist I am influenced by is Doron Langberg. One thing I have admired about his work is the variety of mark-making and technical approaches that he applies and combines within a single painting. He describes friendship or familial closeness. He searches for affinities between textures, marks or color relationships and moments.

SJ: I combine drawing and painting to explore a nostalgia of distant intimacies in my life, transformed into figures in dreamscapes, and construct images that reveal and empower the complex realities of Iranian female identity…My paintings express my personal story, but they also reflect the lives of Iranians and suppressed women. I address the complexity of Iranian female identity in the imagined space that departs from reality and creates an extraordinary, supportive, heterotopic representation.

SJ: I admire Alice Neel because she changed a societal perception of women. She did not represent women as a vulnerable, passive and weak creature of male gaze in Western art. She was able to change the concept of the female body from an idealistic appearance to a powerful one.

SJ: Have my paintings in the museums.

What are you listening to in the studio right now?

SJ: My anxiety was on the highest level.