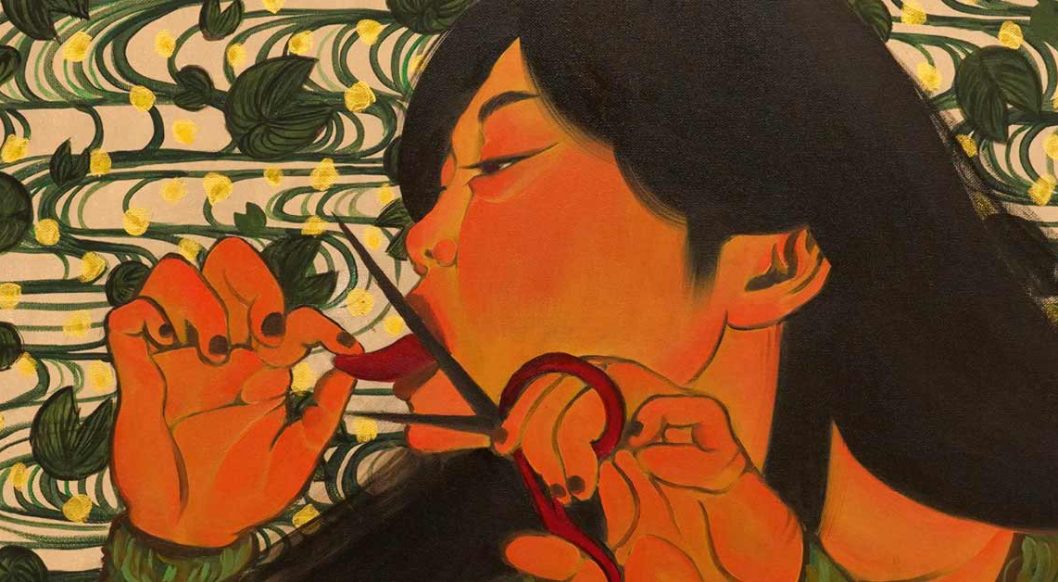 Sekaikan is Japanese for “worldview,” but the English translation skirts the heart of the meaning. Japanese-American artist Izumi Miyazaki explains that sekaikan—a driving principle behind her provocative work—goes beyond “worldview” to describe a “distinct world that one has created, such as through fashion, music, [and] art.”

Densely packed and saturated with clashing colors, Izumi’s figure paintings often center on the artist’s experience as a Japanese American woman. Creating her own microcosm of family, friends, and community, Izumi renders her figures with heavy distortion to represent the stress and struggles that consume them on a daily basis.

In her self-portrait “You Speak Good English,” Izumi raises a pair of craft scissors to her tongue, dangerously close to making the cut. Inspired by a run-in with a stranger, the work expresses Izumi’s frustration with how she’s perceived, even in her home country. “Although I was born and raised in America, I still get told [you speak good English],” she tells NOT REAL ART. “This is a self-portrait of myself literally cutting off my mother tongue.”

Elsewhere, Izumi imagines brutally destroying the Japanese patriarchy, “a system that has oppressed women […] for centuries.” In “Mother Beheading Japanese Patriarchy,” Izumi picks up where ​​Artemisia Gentileschi left off, translating the Baroque painter’s iconic “Judith Beheading Holofernes” into a feminist story for Asian women. Izumi arms her mother and grandmother with razor-sharp swords, perfect for beheading the patriarchal beast.

“Although some of my pieces deal heavily with race, I believe my experiences dealing with racism can be applied to many people of color,” she says of her work. “I also want the viewer to empathize with the mood that my figures visually project, regardless of whether they know the exact meaning—whether that be melancholy, rage, deep thought, boredom, [or] sadness.”

Izumi Miyazaki discusses her fascination with historical iconography, appropriating Western culture to craft a personal narrative, and how her new painting project investigates the depths of familial love.

Many of my paintings have art historical iconography or art historical references. For one of my favorite paintings that I have created, “Mother Beheading Japanese Patriarchy,” I read several biographies and autobiographies of female and feminist artists. I really enjoyed reading Mary Garrard’s book Artemisia Gentileschi, which essentially brought Artemisia’s once forgotten painting and life to the forefront of the art world. Infinity Net, the autobiography of one of my favorite Japanese artists, Yayoi Kusama, is also a very enjoyable and quick read. Kusama’s book taught me the importance of perseverance that is required of several artists to create impactful work.

Can you tell us more about the influence of Japanese art and culture on your work?

It was then that my nostalgia for Japan and my slight fear of forgetting my Japanese identity inspired me to infuse more of my Japanese identity into my work. Although my main link was far away from me, Japanese culture was and is still something I know of very well and can speak on personally. My paintings sometimes convey a specifically Japanese experience while other times they convey a broader Asian-American experience. I often use photographs from my parents and my grandparent’s childhood, as well as photos from my visits to family in Japan.

Visually, I believe I am also more drawn to Japanese style artwork like anime and manga and woodblock prints because I was exposed to them when I was younger. They tend to be very figural with distinct line work and dynamic poses—many visual concepts which I currently work off of in my own paintings.

What's the story behind "You Speak Good English"?

“You Speak Good English” is a painting titled after a direct quote from a stranger downtown. During one of my commutes walking to work in downtown Pittsburgh, a man I did not know asked me a simple question to which I responded to. The second thing he said to me immediately after was, “You speak good English.” This remark blindsided me, as it was so random and also ironic in that it was grammatically incorrect. But it did not surprise me. Although I was born in Maryland and raised in Virginia, strangers and acquaintances would often comment on how fluent or how “white” I sound, how well or how good I spoke English. It is always strange to hear comments like this when I am much more comfortable speaking English than Japanese, which is my native tongue.

“You Speak Good English” shows me moments before literally cutting off my tongue with scissors. It represents my frustrations and fears on how others perceive me. Do they judge my actions and my words first through the fact that I am Asian? Are their first impressions of me not whether I am smart or funny or kind but that I am Asian? Why can’t I speak Japanese as well as English? In literally cutting off my mother tongue in my painting, I am separating myself from these strange, frequent and condescending perceptions of my words and my appearance.

Can you talk about appropriating Western influence in your work? What was the thought process behind "Mother Beheading Japanese Patriarchy"?

My painting, “Mother Beheading Japanese Patriarchy,” shows my mother and my grandmother cutting off the head of a kabuki actor. It is a visual reclamation of female independence and female strength from the Japanese patriarchy, bringing attention to the undermining and abuse of women in my family due to androcentric Japanese culture and traditions. It is compositionally based on Artemisia Gentileschi’s iconic painting, “Judith Beheading Holofernes.”

I was first inspired by artist Yin Xin’s painting that he did for a gallery celebrating Boticelli in which he painted Boticelli’s “Birth of Venus,” but Venus as a Chinese woman. I thought this was a meaningful work that highlighted the lack of Asian representation in the traditional Western art history curriculum that primarily focuses on European art from a very narrow timeframe. I was highly inspired by Yin Xin’s work of appropriation, and also Kehinde Wiley, who transformed and reimagined powerful Western paintings with their white figures into powerful and vibrant paintings of his own with black figures.

“Mother Beheading Japanese Patriarchy” draws on this concept of re-imagination and appropriation to weave my personal narrative into Artemisia’s iconic composition, honoring women. The crux of the painting centers on how men have stolen and taken credit for many female accomplishments and undermined women as a whole. There are several visual feminist references embedded into this work, including how the modern all-male kabuki theatre was actually created by a woman, Yayoi Kusama’s rise to fame despite other artists plagiarizing her ideas, Frida Kahlo’s double portrait with her bleeding heart turning into red flowers, the female equivalent of a samurai, etc.

Tell us about your experience in the traditional gallery system—have you ever felt marginalized or taken advantage of?

Because I am a young artist, I do not have much experience in the traditional gallery system yet. However, I have realized that my subject matters on Japanese culture and my experiences being Japanese have been somewhat exoticized by my peers. I do not know whether they’re interested in my art for the feelings and messages that it conveys or whether it is a token piece that is meant to “diversify” the rest of the works shown. I hope that this sentiment does not continue into the traditional gallery system.

What's one thing you would change about the art world, if you could?

One thing I would change about the art world is increase funding for artists and artistic endeavors. I believe the government needs to dramatically increase their funding on the arts to allow art, creativity, and new young thoughts to flourish.

What role should money play in the art world?

In a perfect world, I believe money should never be an obstacle that stops anybody from wanting to become an artist or perfecting their artistry. I believe there would have been so many more amazing artists if more people had the luxury of pursuing art without the worries of money and surviving on an often unlivable or frighteningly low wage.

My current project that I started is very personal called Til Death Do Us Part, which focuses on the relationship between my mother and my brother.

My mother is the full-time caretaker to my twenty-six year old brother with severe autism. She takes care of every aspect of his life, from bathing him, brushing his teeth, taking him to the bathroom, feeding him, etc. I would like to document my mother’s daily life through a series of paintings. The title of the series is a spin off of marriage vows. Although divorces are so frequent and the promise of “til death do us part” is often broken between individuals, the promise between my mother and my brother continues to be upheld. And when many American parents expect to be “free” of their children once they turn 18, that is not the case for my mother and other parents who have children with extenuating circumstances. Seeing my mother care for my brother is one of the most selfless acts that I have ever seen. She represents and performs what I believe is true love every day, and I want to dedicate this series to her and honor her daily acts of love and care.

This interview has been edited for length and clarity. All photos published with permission of the artist(s).