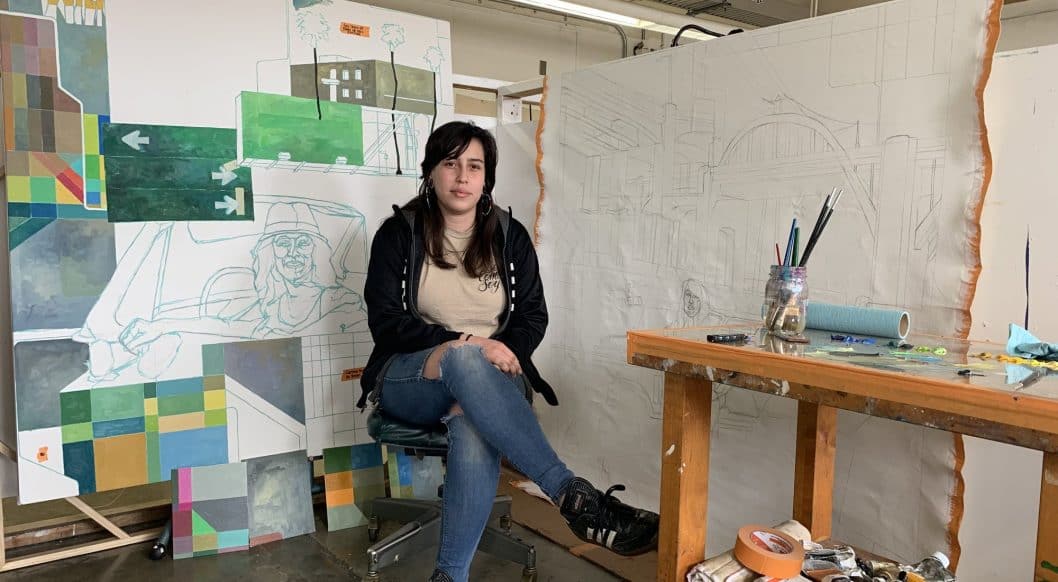 “Beauty is highlighting or giving a platform to communities that are overlooked.”

Not Real Art grant winner, Jacqueline Valenzuela grew up in Whittier, CA, the daughter of immigrant parents and is the youngest of four siblings. An artist from early on, Valenzuela recalls the influences her upbringing and surroundings played in her art. “It was kind of weird growing up in an immigrant household because I was trying to adjust between being Mexican but also, trying to fit into an American subculture, or lifestyle.”

Valenzuela recalls conversations with her father about her paintings, and says that although her parents are her biggest cheerleaders, they wanted to know why she “wasn’t painting about the motherland.” But Valenzuela felt a deeper sense of authenticity painting about the culture she was currently living in.

“Once I started painting more proficiently during my college years, I wanted to include something that had to do with the subcultures I was exposed to. But I also wanted to work on stuff that had to do with my background. So I felt like I had to do something that was based on my parents, like immigrant life, but it always felt kind of fake. I mean, I visited Mexico all the time growing up, but there was still a disconnect. I was really into lowrider subculture, since I grew up off of Whittier Boulevard, and that’s one of the main streets that lowriders cruise down every Friday and Sunday.”

“I realized that a lot of people weren’t aware of women lowriders.”

Valenzuela then got her own lowrider and the niche for painting lowriders was born. “That’s when I really felt like okay — I’m just going to start painting about lowriders. It started off very abstract, more like lowrider pattern, but the more that I immersed myself in it, the more I realized that a lot of people weren’t aware of women lowriders, or if they were, it was kind of shoved under the table, even within the lowrider subculture.”

Valenzuela’s artist statement reads, in part, “My work is an attempt to bring women in the lowrider scene to the forefront as well as bring attention to this aspect of lowrider culture out of the streets and into a gallery setting, encouraging a diverse array of individuals to interact with Chicano and lowrider culture. The various artistic languages that travel throughout the picture plane bring forth the everyday scenery that these women face.”

Valenzuela describes her process of telling the stories of these women through her paintings and concedes that the critical voice sometimes takes hold while she’s working.

“I started interviewing women from different areas that had lowriders. After interviewing them, I would collect reference pictures from them, and then from those, I would build the composition…Honestly, the first paintings that I did…this whole process, they were so bad,” she says with a laugh. “I draw everything out. Then I’m like, ‘Okay, this is a really cool drawing, the composition is great, it’s going to turn out great’ and as soon as I start putting paint on, it’s like, ‘Oh, shit!’ It’s not until I have a full layer of paint and start fine-tuning and adding details that I say, ‘Okay, this looks good.’ But even some paintings that I’ve called finished, I’m still like – what is going on there?’”

A graduate of Cal State Long Beach, Valenzuela shared, “Of all my siblings, I’m the only one that’s pursued higher education. I think it was weird for them that I went for art because I feel like most immigrant parents want their kids to do something medical or they want them to be a lawyer –something big. Something that’s gonna make you money. So it was kind of weird for them to adjust to that, but they’ve always supported me. They’ll go to my art show opening and show off to their friends, ‘My daughter is an artist.’

“I didn’t even want to be a painter. I wanted to be a tattoo artist. I had really good grades during high school and my teacher got on me because I told him I wasn’t going to apply to college. So he made me take my SATs and I ended up getting a high score. I applied to a couple of colleges last minute and I ended up going to Cal State Long Beach…I didn’t even know if I really wanted to do it, but it’s been amazing.”

When asked about a time in her life that stood out as an act of rebellion, Valenzuela recounts the story of shaving her head.

“I was really into punk. I was soaking up that East LA punk scene, going out to shows and um, I shaved my head when I was 14…I cried the whole time because I was like, ‘Oh my God, my friends are going to be really angry.’ Again, in a Mexican household, I think it’s pushed a little that you have to be more feminine.”

Jacqueline Valenzuela on the impact of the coronavirus

“It’s been really weird because I was teaching art lessons at an after school program and now our district is closed. So I basically have no income. I’m still painting, but I’m also trying to do more commission work, but still trying to balance that with my personal work.

“In the same breath, having to make art right now is difficult, because I’m trying to create but I’m thinking — oh my god, am I going to make money? It’s a weird process. I never thought that I would have to try to make money solely off of my work. At least not right now. I’m still trying to paint but some days I get up and I don’t want to do anything. Maybe it’s because I wanted to apply to grad school by the end of this year, and I don’t see that happening right now.”

During quarantine, Valenzuela’s father wanted her to paint a bull for him. Instead, she gave him an oil painting lesson and he painted it himself.

“He grew up on a ranch in Mexico – where you have some cattle and some land and he had been begging me to paint this bull before December. I’m like, ‘Dad, I have stuff that I need to do! I have my personal work or I have a really big commission. I can’t just drop it right now.’ And he said ‘You know what? I’m gonna paint the bull.’ So I set up all the materials for him. I drew out the bull, and then it was just him following every step.”

The biggest challenge for artists today

“I think it’s traversing the art world. It’s tough. When I was in art school, my teacher kept drilling in our head that we should be making art but that it’s equally as important to go out there and go to art show openings. ‘Make sure that you’re introducing yourself to people. Let people know that you’re an artist.’ It’s way too much to deal with…finding opportunities because when you’re an emerging artist, people don’t take you seriously.

“You always have to show up for yourself. Because if you’re showing up for yourself, then people will reach out to you…So, there’s a lot of problems trying to figure out the professional side of the art world, which is completely different than actually making the art itself.”

“Beauty is highlighting or giving a platform to communities that are overlooked. I like to highlight cityscapes. I love putting the grime on the freeways that I’m painting or the bridge underpasses. I love doing that because to me, that’s beautiful. Just subtle differences in a concrete jungle. It’s that stuff that these women see and that I see – all the time.”

“Even though artists like myself are underrepresented, we still matter. We’re still making art.”