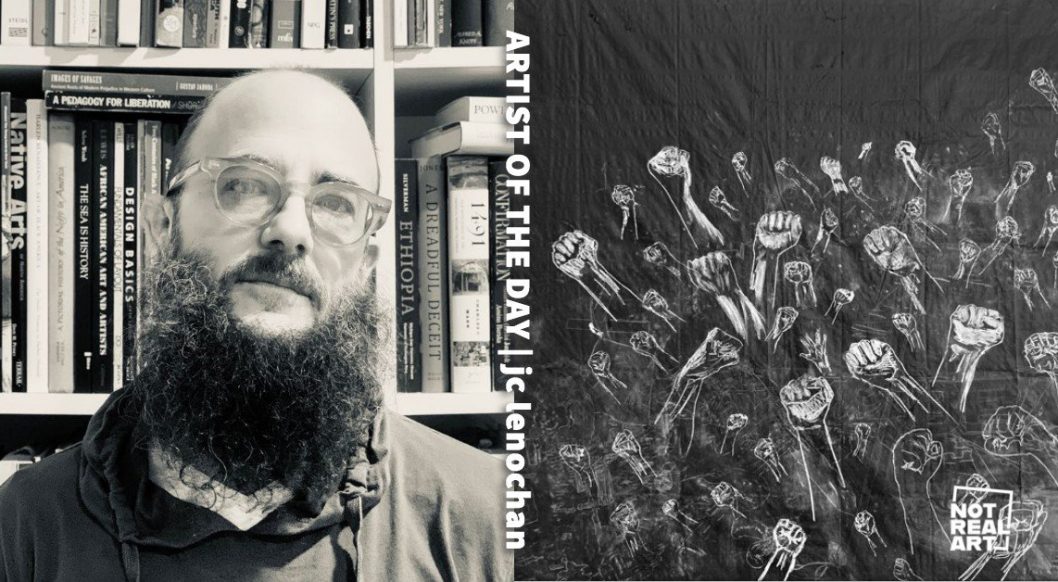 New York installation artist JC Lenochan grew up in a diverse neighborhood in the South with Native American, Irish, French, and white-sharecropper roots. He uses drawing, sculpture, performance, and installation to rethink ‘racial fabrications, perceptions of otherness, and cultural values.’ His multi-disciplinary projects call out discriminatory practices in American life. By ‘deconstructing objects and re-circulating institutional relics,’ he hopes to encourage more inclusive modes of thinking.

Lenochan received his MFA from the Mason Gross School of the Arts at Rutgers in 1996 and attended the Skowhegan School of Painting and Sculpture in 2001. His exhibition, Undoing White Mess, at Smack Mellon Gallery in Brooklyn, included a chalkboard drawing of a ‘de-racing machine’ and mixed-media sculptures from books on the politics of race and class, sealed shut with cement. Inspired by the writing of Toni Morrison, he ‘confronts the system of whiteness’ in contemporary society and challenges cultural assumptions based on the color of one’s skin.

Since 1996, my practice has involved the very ideas of democracy which by definition states "the absence or disapproval of hereditary or arbitrary class distinction or privilege" even though we are more alike than some would choose to acknowledge we need to embrace the beauty of cultural differences and confront the nihilistic attitudes toward poverty, incarceration, gender bias etc. through visually rethinking possibilities to form a true democracy.

Lenochan’s multimedia installations combine objects, images, and words to make searing statements about white-privilege. He has received some criticism from curators for attempting to create ‘Black art,’ but is committed to promoting diversity and social progress through challenging and insightful politically-based work. In a country fissured along party lines, where books are being banned, and discussions of racial history eliminated from university and public school curricula, Lenochan’s articulate approach to art-making reminds us how critical it is for artists to have a voice.

The work is a series of questions on the acquisition of knowledge through the action of deconstructing objects and re-circulating institutional relics, reconfiguring these commodities the way I think they should be viewed as an initiative to arts transformative function. Through investigative research, drawing, riffs on traditional sculpture and mixed media installations, concepts of concrete versus abstract visually thinking through concerns in academic critical discourse. Employing ideas of contradictions in images, text or forms that already exist, with personal/historical narratives layering Socratic methods of questioning and humor as a post-colonial pedagogical dialogue on manipulating perspective of the dominant ideology, confronting cultural bias, perceptions of otherness and racial fabrications. Everything we see has the potential to become inexplicably something else in terms of social justice, wherein issues and concepts dictate materials and process.

jc lenochan is a multi-discipline artist combining drawing, sculpture, performance and installation as a formidable practice in the question of academic pedagogy as a means of critically rethinking the acquisition of knowledge in terms of racial fabrications, perceptions of otherness and cultural value. He was born in the US and currently works in New York City. His MFA was received at Rutgers University’s Mason Gross School of Art in 1996 and he attended the Skowhegan School of painting and sculpture in 2001. He is the recipient of the Pollack Krasner Grant in 2010-2011, Artist in Residence at the Newark Museum 2011, the Franklin Furnace Grant in 2011-2012, The Brodsky Fellowship for print and paper innovation in 2012, Elizabeth Foundation Fellowship 2012, the Puffin Foundation 2013, 2013 SIP Robert Blackburn Fellowship, artist in resident at the Fountainhead Residence in Miami, Fl. summer 2014, Step Up Artist at Real Art Ways in 2014, Open Sessions at the Drawing Center 2016-2017 and a recent recipient of the New Jersey Council of the Arts 2016 fellowship/grant.

He is included in a number of permanent collections both private and public including his most recent acquisition into the Delaware Art Museum’s permanent collection in 2012 and the Newark Museum in 2014. jc recent exhibitions include a solo exhibit in Real Art Ways in Hartford Conn. and group shows in Brooklyn, New York, Newark, New Jersey, Charlotte, North Carolina, Miami Fl. and was recently invited to the White House to lecture on Juvenile Justice and the power of the arts. jc is currently working with local high school students in Newark NJ on a new installation/performance at the Gateway Project in Newark NJ as artist in residence, titled “raising a Riot” for 2016, Eastern Illinois University visiting artist and a group show in NYC at the drawing center 2016-2017 as part of open sessions.

jc has a traveling social sculpture titled Public Protest Post: a brand new world which will be featured at the Center for Book Arts in New York, New York 2017, ArtOmi artist in residence 2018, keyholder residence 2018- 2019 what you think matters” at the University of Connecticut and University of Pittsburgh as part of a traveling exhibition Race and Revolution 2017-2019, 2019 Denniston Hill artist in residence in upstate NY and most recently had solo exhibition in New York, New York at Smackmellon. jc is committed to creating critical transformational experiences for the public through conceptual based projects and social sculptures that highly involve input and ideas from local youth for community engagement which includes a series of lectures on “art and education being synonymous” as the art of listening, that was presented at the White House as part of President Obama’s youth initiative “juvenile justice month”.

JC on the Web And Social Media

Here is where to find out more about JC on the web and social media: