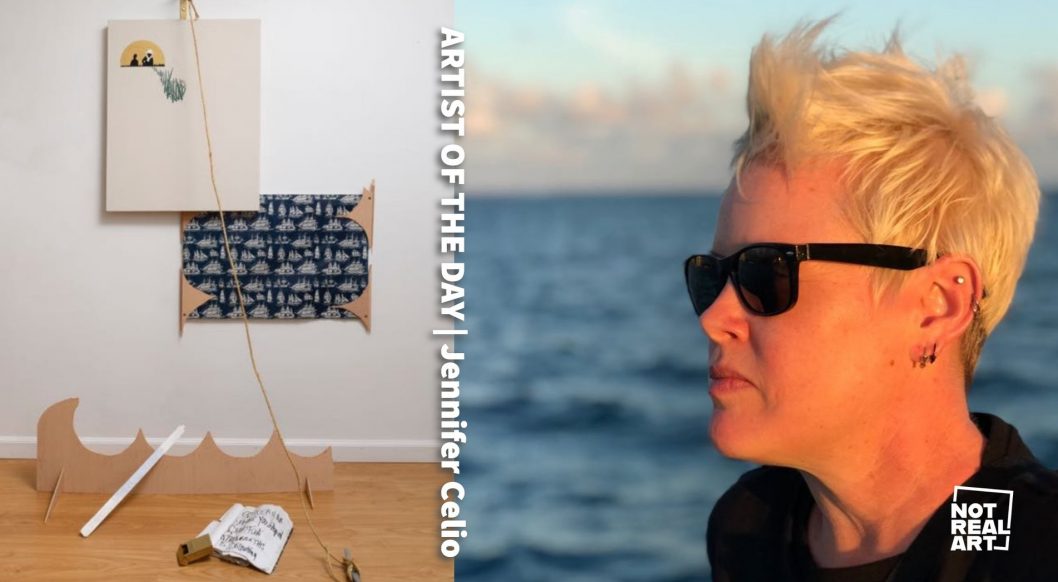 As a child, Jennifer Celio longed to join the Girl Scouts and lose herself in the woods. But her explorations of the wilderness had to be postponed until she was an adult. Originally from the Los Angeles suburbs, and currently based in Long Beach, Celio examines the complex relationship between man and the environment. Her playful mixed-media installations combine found objects such as cigarette packs, burlap sacks, scraps of driftwood, safety goggles, with works on canvas and paper to address the throwaway nature of 21st-century life.

Celio earned a BFA from California State University in Fullerton and became a member of the curatorial and artist-run space Durden and Ray in downtown Los Angeles. Her work was included in the 2015 Biennial at the National Museum of Women in the Arts in Washington, DC. She has participated in exhibitions in London, Mexico, Istanbul, Greece and Germany. By increasing global awareness of a planet buried in detritus, and reusing unwanted items, Celio strives to become an ‘advocate for the natural world.’

I want to expand beyond my personal goals to make and display work that can reach audiences beyond the gallery and museum seekers. Utilizing discarded materials and trash to make my sculptural work is a dual effort to reduce my personal consumption while demonstrating the growing issue of waste and resource over-use. Via large-scale sculptures composed of unexpected trash items and scraps, I aim to make rigorous contemporary art while also making it approachable for a wider group of viewers.

During college, Celio created detailed renderings of ‘banal urban settings where humans and nature collide’ and achieved a certain amount of success. Her career stalled after she switched to installation, but she was determined to follow her own path. To rekindle her connection to the wild after months of COVID isolation, she set out on a road trip in a camper van to explore a series of national parks. Her ironic juxtapositions of cast-off objects with paintings and drawings express her deep ecological concerns and reverence for nature.

Through my art practice, I’m encouraging a rekindling of our innate connection with nature while also provoking conversation about rampant consumption and waste, and larger unsustainable human practices as we hurtle towards an environmental tipping point. Bouncing between the glimmers of societal change and the stubborn realities of human behavior, my work explores the pressing issue of abuse of natural resources to fuel the disposable nature of objects in most human cultures. Utilizing and re-using items that would otherwise be discarded, I assemble sculptural pieces that seek to lessen my own impact while discussing the complicated human relationship with the natural world that has led to our collective disconnect from it.

Jennifer Celio is an interdisciplinary artist whose work has long examined the complicated human relationship with the natural world. Jennifer received a B.F.A. in Drawing and Painting from California State University, Fullerton in 1996. She was raised in the suburbs of L.A. and now lives and works in Long Beach, CA. Her work has been exhibited in solo exhibitions at Cristinerose Gallery and Kathleen Cullen Fine Arts in New York City; Haphazard Gallery and the Creative Artists’ Agency in Los Angeles, CA; La Estacion Gallery in Chihuahua, Mexico; romo gallery in Atlanta, GA; Bandini Art in Culver City, CA; California State University Dominguez Hills in Carson, CA; Moorpark College in Moorpark, CA; and Phantom Galleries in Long Beach, CA. Her drawings represented the Southern California region in the 2015 biennial at the National Museum of Women in the Arts in Washington, DC.

Her work has also been included in exhibits in New York, Los Angeles, San Francisco, Atlanta and Houston; and Berlin, London, Mexico, Colombia, Greece, Istanbul, and Canada; and in other museum exhibits in San Francisco, CA, Long Beach, CA, Laguna Beach, CA, and Indianapolis, IN. She was a member of the curatorial and artist-run space Durden and Ray based in downtown Los Angeles, from 2017 to 2020.

Jennifer on the Web And Social Media

Here’s where to find out more about Jennifer Celio on the web and social media: