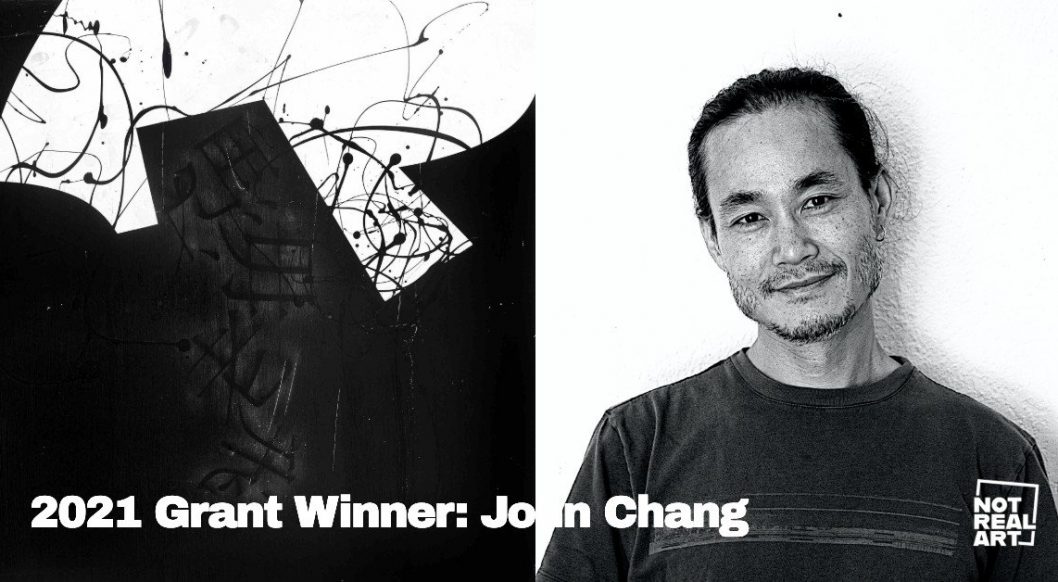 Not Real Art Grant Winner, John Chang was born and raised in Shanghai, which he describes as a “big city – the same as a New York.” While some might think that’s exotic, Chang says that as a child, he sometimes found it boring. But boredom would not dominate Chang’s childhood. Instead, his mother gave him an ultimatum – either make art or play the piano. For a time, John did both until his love of pencil drawing became his driving artistic force.

“It’s about day and the night, about the positive and the negative energy dealing with your life.”

The epiphany to be an artist came as he watched his uncle, a well-known painter and comic book artist who advised Chang that he could make a living in drawing and painting. When asked if Chang still plays the piano today, he laughs, “Yes. It’s kind of relaxing and brings back some memories of when I was a child. Kind of a getaway.”

Chang accredits his mother, a classically trained artist, for some of his foundational skills as a painter. His father, an engineer, felt that it was hard to find a job in the arts and sometimes his parents would argue about his future. “But father is so easygoing. Most of the time, he would say, ‘Listen to your mother!’”

Chang moved to the United States when he was 28 years old and describes the move as quite a culture shock. In his grant application, he shares, “I immigrated to Boston to study art in graduate school. It was a much more complex society than I had imagined. Longing for a democratic system, I wasn’t prepared for the magnitude of consumption…It was quite a shock and heightened my awareness of self-belonging to both worlds, and neither. I recognized the social construction of cultural codes and their impact on identity.”

“It’s not quite like the Hollywood movies that I saw in China.”

Chang was eventually accepted at a gallery in Orange County where he was also offered studio space, which seemed like a dream at first until the story took more of a dark turn. “I thought it was great! This is my dream. I can paint and walk to the beach and you know, get some ideas and do some sketches. That’s a good life, right? When I checked back sometime later, there was a sign and yellow tape around the building that the gallery was closed. A few of the artists were standing around the gallery and all the paintings were gone. I still had 10 pieces in the gallery…the guy just disappeared. It was a big shock to me.”

Chang never got his paintings back. “I’m not famous. I decided I should just move on. I decided to come to L.A. and try to get a job. At the time, I only had $75 in my pocket, my portfolio, and my backpack.” He did find kindness in L.A. and worked small jobs before landing a larger job as a production artist.

Yet, Chang’s story has no Hollywood ending just yet. Considering the amount of his own painting that surround him on the day of this interview, he’s nowhere near done. Chang describes his process, “My work is about childhood memory. The Chinese characters, the Chinese poster, and also banners during the Cultural Revolution – and the language…Also, my work is about personal identity.”

“Once I’ve painted it, I give it memory…your pain is kind of your biography.”

“I start with collecting all the materials. I wake up in the morning and I just drive around the town and pick up newspapers in different languages – like Chinese, Japanese or Korean and also all the commercial production material that I’m working with. And it’s kind of about the city. It represents the city and the pop culture, and the diversity or the language in the mix. I bring those home and divide the clippings into different categories. The second process is, I deconstruct all the Chinese characters, all their radical elements, and I kind of arrange them.

“I think it’s like life, it’s a puzzle you put together, and you see what the balance is and if it’s good for you. It’s about day and the night, about the positive and the negative energy dealing with your life…So, it’s kind of a long process. I’m sketching a lot and once I’m done with all the sketching, I gradually process those things and clippings into the paintings. Once I’ve painted it, I give it some kind of memory. You see the people, you see the tags. It’s all about the memories. It’s revealing. Like just a part of your life. Your pain is kind of your biography.”

When asked what the core message of his work is, Chang laughs. “I don’t have some big slogan. My work is part of my life and people can pick the story of their daily life.”

Chang admits that one of the challenges of being an artist today is the increasing lack of interaction. “I think today, it’s even harder than when I came here because it’s all online. The younger generation, they don’t even look at art in person. They just browse and order online, the artist ships it. They [either] adore it or they don’t like it, and they can just repack and send it back. They don’t have to contact you or see you in person or see or smell the painting and you know – see the texture.

“I want to come back to paint wild…for the physicality, the smell, the dirty hands, and the water, where you’re feeling into the art.”

“I don’t get to interact with them or the painting to see how it touches their heart or their senses. That’s kind of sad for me. When I started in grad school, one of the mentors asked me, ‘Why did you come back to grad school? Your computer skills are so great and you can pursue your digital art.’ I said I want to come back to paint wild…for the physicality, the smell, the dirty hands, and the water, where you’re feeling into the art. I want to balance my life and balance my work.”

The best thing about being an artist is…

“Freedom. I can just express myself through the visual language. People can feel from the texture, all the information in the paintings. They say, ‘Hey, we like it.’ You know though, the better thing is if they buy it!”

“Beauty, today? I do a lot of high-profile retouching for movies. For the people defining beauty – it’s like, you have to be retouched. We don’t even know natural beauty anymore…For me, it’s simple. I pick up all the materials and bring it home, and it’s trash – all these used and unused papers. For me, it’s a kind of beauty. It’s all the things that I need; I can just give it the imagination and transfer it into something that people can think is beauty.”