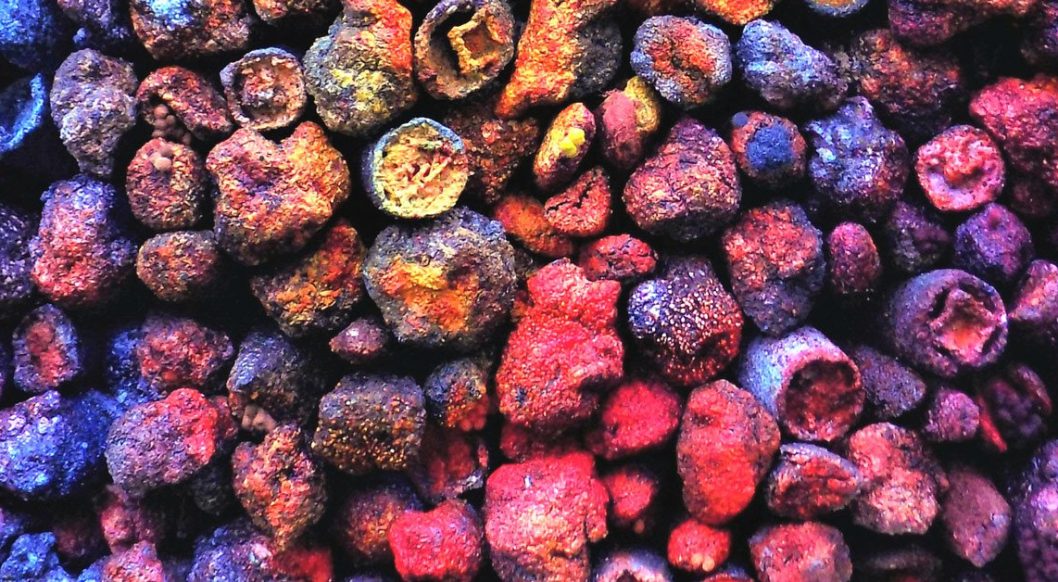 “Most of my work is breaded with oatmeal,” says Jonah Jacobs of his amoebic sculptures. “The oatmeal, along with sand and plaster, gives my work a textural quality not seen in other works of sculpture. The oatmeal also acts as a sponge that soaks up the various dyes. This gives my work a strange vibrancy and natural blending of tones.”

Almost animate, Jonah’s kaleidoscopic sculptures glow from within, pulsing with an eerie alien light. The Ohio-based artist isn’t sculpting the rocky terrain of Zebulon 9 though, or even an imaginary underwater cave on Mars. His work emphasizes the grandeur and complexity of carbon-based life forms on Earth, their structures distilled, magnified, and taken out of context. “Understanding the physicality, and how form and function are intertwined in nature, is the philosophical foundation from which all of my sculptures are created,” says Jonah. “I want to know how things are built and not just what they look like.”

Describing himself as a “material alchemist,” Jonah blends art and science, using unpredictable elements to give his sculptures a life of their own. “Fire also plays a large role in some of my work,” he says. “I use fire to create spontaneous and organic shapes. This helps keep my work from becoming too formulaic or geometric in form.” From fire to oatmeal, the offbeat materials Jonah uses to create his sculptures open a whole nebula of possibilities. Recycled egg cartons, yarn, gravel, sand, spices, and dryer sheets become the genetic blueprint for sea urchins, stars, fossils, ancient trees, primordial space soup.

Whatever the organism or object, Jonah’s practice hinges on unwavering patience with the changeable nature of our world. He comments: “From the graceful spiral arms of galaxies to the nebulous webs created by tree roots to the hexagonal geometry of honeycomb—the structures of nature are wondrous creations where beauty meets function, and the repetition of simple patterns gives rise to an enigmatic complexity.”

“I want to know how things are built and not just what they look like.” — Jonah Jacobs