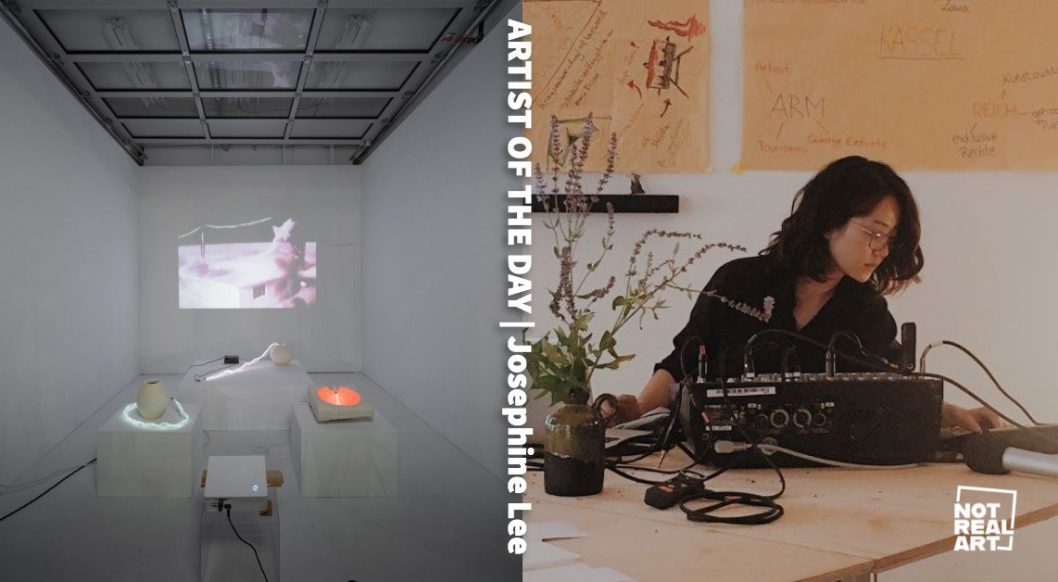 Josephine Lee is a multidisciplinary artist who resides in the unceded territory of the Coast Salish Peoples, an area of British Columbia that was never ceded or legally signed away by its indigenous occupants. Lee uses video, performance, sculpture, and installation to investigate ‘overlapping identity formations, and notions of home and belonging.’ Her work combines elements of her life in South Korea with her nomadic experiences in Canada and the U.S.

Lee holds dual degrees in science and fine art and performed at Documenta in Germany. Her performances and installations range from explorations of ‘toxic nationalism,’ to the traditions of Korean wedding ceremonies, and the long-term effects of nuclear waste. Her video, I Think I Canada I Know I Canada, 2018, a riff on the children’s book “The Little Engine that Could,” shows her waving a banner in the frozen tundra to illustrate the realities, hopes, and frustrations of migrant life.

My work serves both as an interrogation of the relevant and urgent dialogues on race, nationalism, and belonging that we reconcile with on a global and national scale today. I draw upon my personal experience for this project. A lifetime of moving throughout Eastern and Western United States, and across the breadth of Canada, has enabled me to experience firsthand the complexity of home and belonging, environmental patterns of extraction and toxicity, and the pervasive and racialized policies directed towards immigrants and people of colour.

A recent project involves redesigning ceramic ‘trauma plates,’ used in police and military body armor, for people of color. By alluding to the ‘poetical and metaphorical impact of a fragile, non-working armor,’ Lee hopes to cultivate individual and collective resilience among members of racially targeted groups. Her commitment to highlighting the challenges of the immigrant experience, on both a personal and global scale, gives her work a sense of urgency that draws the viewer to unfamiliar places and conveys the disorientation of losing the meaning of ‘home.’

Informed by a lifetime of movement through the United States, Canada, and South Korea, Josephine Lee’s interdisciplinary practice is heavily informed by the psychic violence of cultural assimilation and naturalization through migration. Lee’s sculptures, installations, and performances, intersect narratives of dispossession and nationalism, making explicit how ideas of place are entangled within politics of citizenship and national identity. Within this framework, Lee’s materials and forms both signify and complicate overlapping identity formations, and notions of home and belonging.

The work interrogates the psychic and physical tensions of legibility, and confronts the precarious conditions of cultural and national belonging. The text and title, based on a children’s book (The Little Engine that Could), appropriates the story’s signature phrases “I think I can” and “I know I can” to examine the story’s intent in reinforcing meritocratic values of hard work and optimism, to instead examine the exploitation, alienation, and dispossession prevalent within immigrant life and labour. Extending the text to nationhood, the work materializes the psychic burden of identity, language, and belonging as a physical one that colonizes and reconditions the immigrant body of colour.

Traditionally, a pair of hand-carved ducks have been used in Korean wedding ceremonies, and are given as a gift for marriage. In this performance, one brass duck was machine-fabricated in Korea and hammered into a gallery wall until its beak held it in place. Documentation is only made of the resulting sculpture.

On July 16, 1945, the world’s first nuclear device dubbed “Trinity” was detonated in the Jordana del Muerto desert southeast of Socorro, New Mexico. Just two miles from the detonation site was the McDonald Ranch house, owned by an immigrant family who were forcibly evicted by the US military. What is little known about this cataclysmic event is that it was in the master bedroom of this otherwise innocuous domestic space that the two plutonium hemispheres for the pit of Trinity, along with other components of the first nuclear bomb, was assembled. In the decades that followed, hundreds of atmospheric and underground nuclear tests would take place around the world, many directly and purposefully exposing peoples, communities, and ecological systems to radioactive fallout. A total of 528 atmospheric tests and 1,528 underground tests have been documented. This project examines notions of home, toxicity, and nationalism through the historical McDonald Ranch House, moving through this literal occupation of the home as a starting point to interrogating notions of contamination, violence, and dispossession enacted by nation states through political ideologies and military intervention.

Surrounded by the blown glass and plasma are spherical porcelain vessels. Unique to Korea, the moon jar (dal hang-ari) takes two separately thrown bowls and joining them together to form a discernible seam, each moon jar’s unique characteristics fall on the asymmetrical line of its equator. This process, in addition to the clay body, glaze, and conditions in the kiln, results in subtle and welcome distortions in the form’s shape. To this day, the moon jar is a highly prized object for the skill it takes to fabricate and its distinctive shape and method of construction. Formally, the moon jar reflected much of the philosophy of the Joseon period (1392–1910) and its Confucian principles. Within this work, the whole and bifurcated forms of the moon jars echo a multiplicity of referents (body, bomb, container for nuclear waste, cold war sculptures of women, postwar gender, and so forth) that proposes it as a form in perpetual precarity, transformation, and ambiguity.

Containment as an attempt at control and limitation of electromagnetic fields permeating beyond impermeable glass, of precarious containers and conditions that store nuclear waste, of politics that reinforce nationalist rhetoric and allegory and curtail 'foreign' influence, and of material and ideological dynamics of power. Glass as a material connects to various points of time: at the moment of the explosion of Trinity when the surrounding desert sand melted into radioactive glass trinitite; during the fabrication and documentation of the bomb with optics and photographic technology; through vitrifying nuclear waste into solid glass in an attempt to slow the enormity of accumulated radioactive matter contaminating our world.

Josephine Lee holds graduate and undergraduate degrees in science and fine arts. Lee has exhibited in Canada and the United States, as well as performed at documenta 14 in Kassel, Germany. Recently, Lee was awarded the Oscar Kolin Fellowship, the Vera G. List Sculpture Award, and a Gail and Stephen A. Jarislowsky Outstanding Artist Award at the BANFF Centre for Arts and Creativity. Lee currently resides within the unceded territory of the Coast Salish Peoples, including the territories of the xʷməθkwəy̓əm (Musqueam), Skwxwú7mesh (Squamish), and Səl̓ílwətaʔ/Selilwitulh (Tsleil-Waututh) Nations.

Josephine on the Web And Social Media

Here is where to find out more about Josephine Lee on the web and social media: