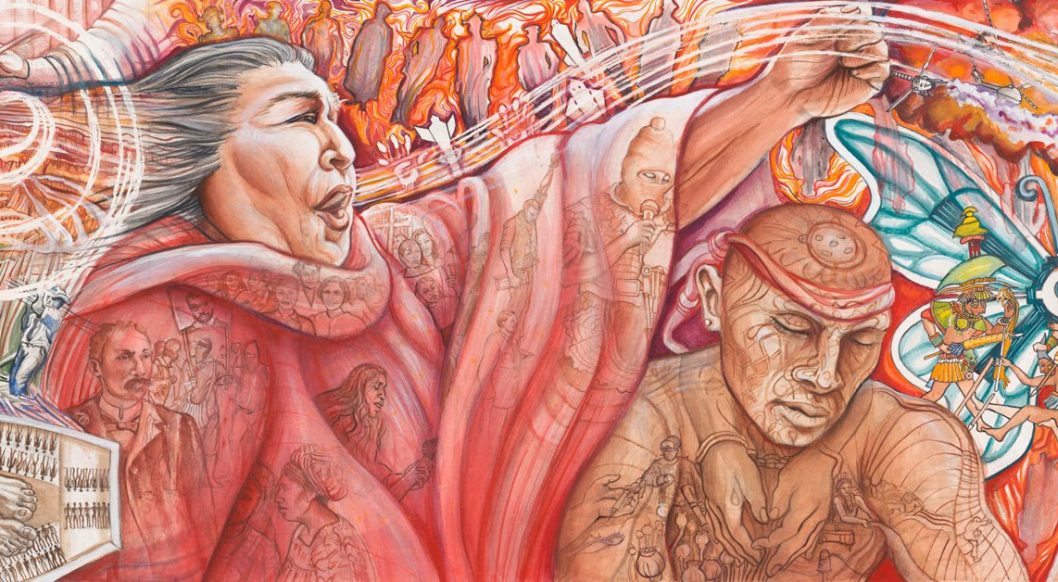 Muralist Juana Alicia Is Inspired by Poetry and Magical Realism

Juana Alicia describes herself as “uncompromising.” She has been criticized for being too political, radical, and issue-driven. Based in Berkeley, California, she has created murals, prints, sculptures, and paintings for over three decades. Inspired by poetry and literature, Juana Alicia blends elements of magical and social realism into her vivid mixed-media work. As an artist and activist, she addresses issues of social justice, gender equality, environmental crisis, and the power of resistance and revolution.

Known for her dynamic murals on the walls of storefronts and warehouses, and detailed portraits of political figures such as Ruth Bader Ginsburg, Juana Alicia is a firm believer in the power of art to enact social change. She aims to “humanize public spaces, reclaiming them in order to democratize the public square, and offer visions of a better world.”

As a Latina artist of working-class origins, Juana Alicia often felt excluded from the traditional art world. She was sexually harassed in academic and non-profit settings, and omitted from publications, exhibitions, and commissions. When a colleague included her in a book on Latina artist/activists in California, it had to be published in Mexico because no one would take it on in the US. Despite incidents of gender and racially motivated bias, her achievements include a Fulbright Fellowship, a Woman of Fire Award, a long list of domestic and international residencies, and commissioned murals throughout the Bay Area, as well as in Pennsylvania, Mexico, and Nicaragua.

Juana Alicia quotes Nina Simone to explain how she has remained motivated and engaged over the years. “‘I choose to reflect the times and situations in which I find myself. That to me is my duty.’ And at this crucial time in our lives when everything is so desperate…How can you be an artist and not reflect the times?”

“The voices of the women have often moved me to make images. I work for the future, for my children and grandchildren and theirs.” —Juana Alicia

Scroll through for a selection of Alicia’s poetic work, submitted to the annual NOT REAL ART artist grant. To learn more about our grant program, go here.