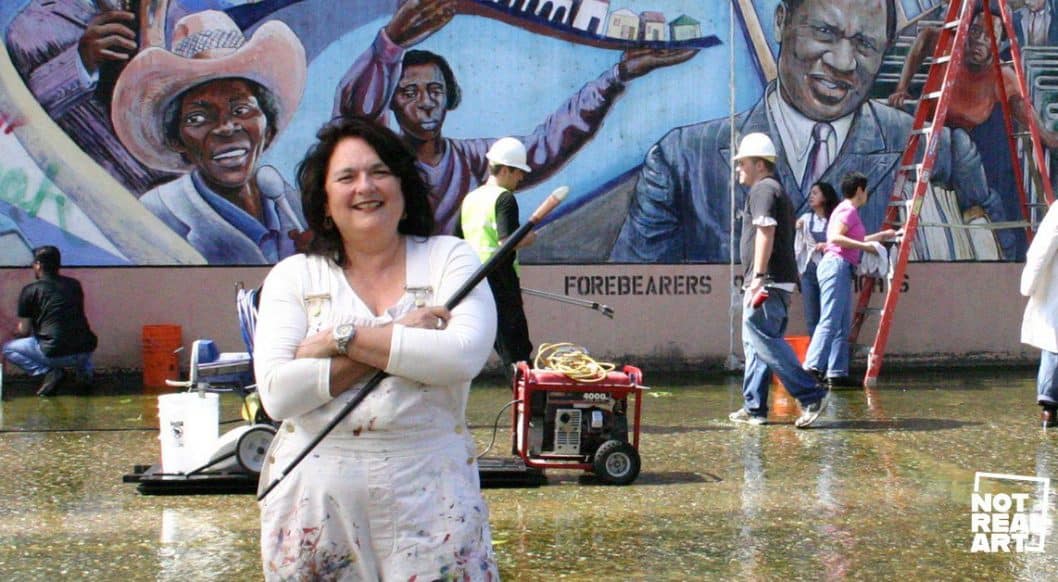 Muralism is empowering, uplifting, and can be a megaphone to celebrate ethnicity. Judy Baca has been creating public art for decades and has produced over 400 murals while employing thousands of local participants to be part of Los Angeles’ social and artistic evolution. Her efforts are embodied by the Social Public Art Resource Center or SPARC.

In this episode, we talk to Judy about her life in public arts and how SPARC has been such a large part of her journey. We begin our conversation by talking about what it was like to be in Los Angeles, as the former public art capital of the world.

“Judy Baca has been creating public art for four decades. In 1974, Baca founded the city of Los Angeles’ first mural program, which produced over four hundred murals and employed thousands of local participants, and evolved into the arts organization known as SPARC, the Social Public Art Resource Center. She continues to serve as Sparc’s Artistic Director and Focuses her creative energy in the UCLA at Sparc digital lab, employing digital technology to promote social justice and participatory public art projects.” — @erinyoshi [0:02:10]

Judy chats about city bureaucracy and that there was little control over who could paint what and where. Following this, Judy introduces listeners to the permitting process which has plagued public mural art progress since its introduction. Yet, by this stage, murals had already left a huge impact on society, as various minorities and ethnic groups residing in L.A were now being represented.

Later in the show, we discuss SPARC’s origin story and discover how it helped to band different neighborhoods together. Judy goes on to detail some of the impressive large-scale projects she has been part of, like the Great Wall of Los Angeles.

Toward the end of our conversation, we talk to Judy about what it was like to learn in the legacy of David Alfaro Siqueiros, as well as what it takes to run community-based projects. For more on Judy’s life in art, be sure to join us in this historically rich and inspiring episode.

“Long before the predominance of graffiti art on the street, there were writings on the street. There was no control over who could paint where, and it was in that climate — 1972/3 — that I stepped out onto the street.” — @judybaca [0:03:40]

“I think all of these permitting processes and bureaucratic controls have been a huge detriment to public art. When public money was engaged, the public actually thought it should be able to tell us what to paint.” — @judybaca [0:07:30]

Key Points From This Episode with Judy Baca:

“Los Angeles is so racially divided, the murals became this really interesting amplification of the differences in the neighborhood and for the first time we put an ethnic face on Los Angeles.” — @judybaca [0:12:44]

“I didn’t have a direct relationship to Siqueiros, but I had a relationship to his legacy and his work. I was learning his processes, his method of how he talked about dynamic imagery.” — @judybaca [0:26:41]

“My purpose is to give visual to the voice. To make that transition between representation equitable treatment, the truth of a voice and the sentiment, and the creation of the visual.” — @judybaca [0:34:32]